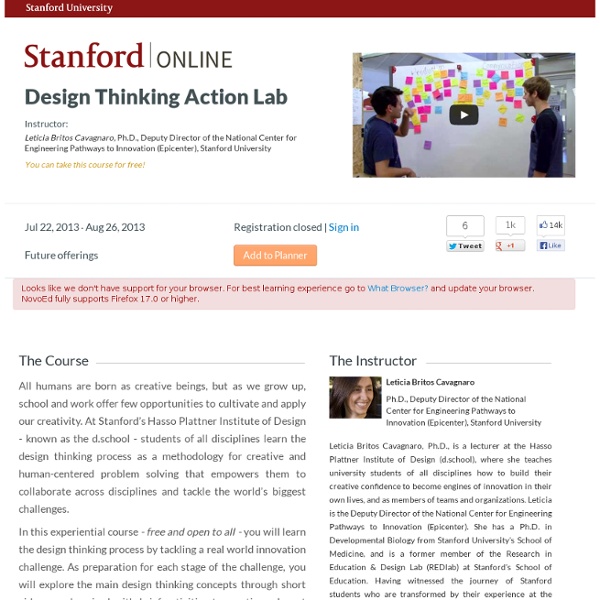 All humans are born as creative beings, but as we grow up, school and work offer few opportunities to cultivate and apply our creativity. At Stanford’s Hasso Plattner Institute of Design - known as the d.school - students of all disciplines learn the design thinking process as a methodology for creative and human-centered problem solving that empowers them to collaborate across disciplines and tackle the world’s biggest challenges. In this experiential course - free and open to all - you will learn the design thinking process by tackling a real world innovation challenge. As preparation for each stage of the challenge, you will explore the main design thinking concepts through short videos, each paired with brief activities to practice relevant methods and approaches. There will be one weekly assignment reporting on your progress, as well as weekly Google hangouts with the instructor. Empathize: understanding the needs of those you are designing for. Workload. Prerequisites. « Less Related:  Methods + SW

The Art of Data Visualization: How to Tell Complex Stories Through Smart Design The volume of data in our age is so vast that whole new research fields have blossomed to develop better and more efficient ways of presenting and organizing information. One such field is data visualization, which can be translated in plain English as visual representations of information. The PBS “Off Book” series turned its attention to data visualization in a short video featuring Edward Tufte, a statistician and professor emeritus at Yale, along with three young designers on the frontiers of data visualization. Titled “The Art of Data Visualization,” the video does a good job of demonstrating how good design—from scientific visualization to pop infographics—is more important than ever. In much the same way that Marshall McLuhan spoke about principles of communication, Tufte talks in the video about what makes for elegant and effective design. What does Tufte mean by this? For those of us who aren’t designers, it’s refreshing to consider the elements of good visual story-telling.

SCAN and Causal Layered Analysis How do we make sense of story – the stories and narratives and anecdotes that people tell each other and themselves about their world? How can we link between the layers of story to help us make sense of some broader picture, or to derive a clearer view of some desired future? (This is a post I’d promised a colleague a long time back – this is me at last completing on that promise! One of the tools I often use for this purpose is Sohail Inayatullah’s Causal Layered Analysis (CLA). CLA describes narrative in terms of four distinct layers: – At the surface is the litany, the world of the tabloid-newspaper, the everyday of ‘the world as it should be’ – or, more often, the ‘litany of complaint’ that it’s not ‘as it should be’. – Beneath this is the systemic layer, the layer of social causation. – Beneath this again is the worldview layer – the stories and narratives through which we decide what is ‘relevant fact’ and what is not. Also interesting (to me, at least Over to you, if you wish?

IRI 2038 Futures Study Launch Date: May 2012 Wrap-up Date: November 2013 As part of IRI’s 75th Anniversary Celebration (2013) IRI commissioned the IRI2038 project, a futures initiative designed to answer the following two questions: How will possible future developments and events impact the art and science of research and technology management over the next 25 years? How can IRI best serve its membership in these possible futures? The primary output of the project is twofold: four plausible, yet provocative scenarios about the future of R&D and innovation management and the results of a backcasting exercise designed to help R&D practitioners prepare for these scenarios. The Scenarios Africa Leapfrogs Developed Countries - An inability to build new capacity in the developed world due to increasing environmental regulations creates a new flexible and localized manufacturing process. Backcasting Africa Leapfrogs Developed Countries Backcasting Summary Discovery Extrapolation The Extrapolation Phase included: Planning

The Thing From The Future – Situation Lab - OCADU The Thing From The Future is an award-winning imagination game that challenges players to collaboratively and competitively describe objects from a range of alternative futures. *link fixed The object of the game is to come up with the most entertaining and thought-provoking descriptions of hypothetical objects from different near-, medium-, and long-term futures. Each round, players collectively generate a creative prompt by playing a card game. In addition to the deck of 108 game cards, a supply of blank index cards and a pen for each player is required. A single deck of The Thing From The Future cards may be used for play by individuals or by groups of two to six members. There are four types of cards in The Thing From The Future: Arc, Terrain, Object, and Mood. ARC cards broadly describe different kinds of possible futures. Grow is a kind of future in which everything and everyone keeps climbing: population, production, consumption… The deck also includes several ARC WILDCARDS. Team

The Life Cycle Of Ideas Every scientific idea has its day. Theories are born and experiments are designed; results are put to the test, then disproved or accepted as canon. As scientists discuss an idea, they cite the paper that proposed it in their own work. Then, as the conversation moves on, references to the paper drop off. The rise and fall of citations serves to measure the lifespan of a paper’s underlying ideas. Popular Science visualized that pattern across disciplines. Life sciences tend to have a flatter citations trend [shaded portion], perhaps because ideas in the field are easier for other experts to grasp—in contrast to fields like mathematics—so it takes less time for them to catch on. Data provided by Thomson Reuters Web of Science; Consultation by jevin west, university of Washington; Analysis and Data visualization by Accurat. This article originally appeared in the May 2014 issue of Popular Science.

Three Horizons – fields of future, full of foresight. I’d like to relate to parts of a book that came out in late 2013 from Bill Sharpe. His book, or actually more a booklet, called “Three Horizons: The Patterning of Hope”, published by Triarchy Press, has some really helpful insights. In this book, Bill outlines his distinct ways of creatively working through many of the unknowns, by framing and connecting though the Three Horizons, (3H) as his contribution to the patterning of hope for all our futures. I draw out a lot within his thinking, experiences and approaches within the book. Here are some of the ‘triggers’ I connected with strongly from his book: The three horizons does offer us much to frame the future Firstly, the 3H is actually a simple framework, see my original opening post in 2010,on a quick explanation if you need it. The 3H methodology enables us to look out into the future, across different horizons. Tackling uncertain futures for transformational change So it becomes clear the 3H is a way of working with change Like this:

How to see into the future Billions of dollars are spent on experts who claim they can forecast what’s around the corner, in business, finance and economics. Most of them get it wrong. Now a groundbreaking study has unlocked the secret: it IS possible to predict the future – and a new breed of ‘superforecasters’ knows how to do it ©Laurie Rollitt Irving Fisher was once the most famous economist in the world. In the 1920s, Fisher had two great rivals. Fisher’s rivals fared better than he did. If Fisher and Babson could see the modern forecasting industry, it would have astonished them in its scale, range and hyperactivity. It is true that forecasting now seems ubiquitous. Irving Fisher. Real breakthroughs have been achieved in certain areas, especially where rich datasets have become available – for example, weather forecasting, online retailing and supply-chain management. So why is forecasting so difficult – and is there hope for improvement? Tetlock’s response was patient, painstaking and quietly brilliant.

future_fabulators:new_approaches_and_needs_in_foresight [the libarynth] New Approaches And Needs In Foresight (workshop at FTA 2014 - 27 NOV 2014) short summary workshop “New approaches in FTA / foresight” at the EU FTA conference, November 2014 (based on notes from Cornelia Daheim) New Approaches FoAM on flickr 4 major clusters: IT-based / “automated” foresight (in early stages, to be used with a “disclaimer” because of the current hype, experiences still have to be evaluated and sense-making still not generated;) Relies strongly on having had a precise “question” / task before starting Integrated qualitative-quantitative approaches. New or Unmet Needs in Foresight Where are new needs? Needs in Innovation Field are expanding Also in corporate foresight Health / social systems “Political” Foresight Need for Shared Theoretical Background / Futures Literacy / practical principles Shared language / vocabulary Prove / exemplify impacts Practitioners being clear about values Need for more value-based approaches Tools and Skills Needs FoAM on flickr Foresight 2030

How to See the Future First manoftaste.de/Flickr One of the biggest challenges innovators face is to truly understand the market opportunity space before they start creating a strategy and well in advance of product development. Since we can’t see the future, we need to gain some real insight from deep domain experts and make sense of possible scenarios. I was given such a challenge when a celebrated medical device company came to me with the following questions: 1). This organization had mastered incremental innovation, smaller and less intrusive devices for example. Innovations often get stuck in the strategic planning cycle where excessive data collecting about the future often postpones their development. We decided to hold a one day summit at an airport hotel and invite a diverse group of domain experts. Each group was given a one page written scenario that they were asked to discuss and adjust to be more realistic given their experience. What are the future opportunities and challenges you will face?

Association of Professional Futurists - “Warming up your brain” using the Theory of Inventive Problem Solving The Theory of Inventive Problem Solving (TRIZ) Some weeks ago I learned about the basics of TRIZ (Theory of Inventive Problem Solving). I find the method itself and also the history of its development fascinating. The development of TRIZ started during the mid 1940s in Russia. The theory TRIZ assumes that typical solutions can be found for recurring problems and that psychological barriers like inertia hinder problem solving. Clearly, TRIZ aims to find solutions to technical problems and does not intend to describe possible futures. Using TRIZ to facilitate creativity and encourage out of the box thinking in workshops Imagine you have to carry out a workshop with participants that have never thought about the future. The Value Changing Method confronts participants with the question of what if an object (e.g. technology or societal values and norms) with an extraordinary value is rendered useless. Other application fields of TRIZ Fantogram: Savransky (2002) and Frenklach (1998) References