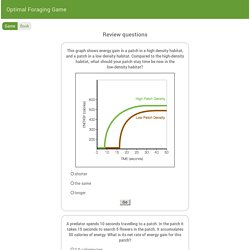 Behavioural Decisions The many things that animals do can be broken down into a series of decisions: when to fight, when to mate, what food to search for, and so on. An optimally designed animal should make the right decisions. If an optimality modeller tackles all these decisions at once, his or her model will quickly get out of hand. So it's best to limit the model to a simple decision: should the animal stay in this patch or go? Currency Ultimately, the benefit to the animal of solving a problem, in an evolutionary sense, is increased survival and reproductive success. Constraints In a perfect world, animals could just suck food and mates out of thin air. Animal Behavior, 2e. Broodmate Aggression Video by Hugh Drummond Success or failure in aggressive encounters often has profound effects on an individual’s performance in subsequent interactions with conspecifics, and such effects are termed winner versus loser effects. 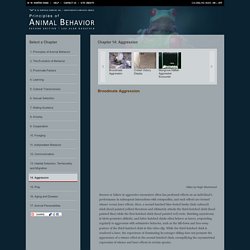 While the third-hatched chick is rendered a loser, the experience of dominating its younger sibling does not promote the appearance of a winner effect in the second-hatched chick, exemplifying the asymmetrical expression of winner and loser effects in certain species. Evolution: Library: Isolating Mechanisms: Lacewing Songs. When explaining a breakup, couples will often say, "We grew apart," or "We both changed in different ways. 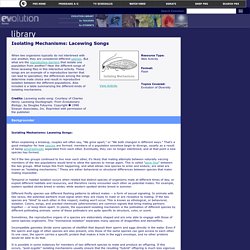 " That's a good metaphor for how species are formed: members of a population somehow begin to diverge, usually as a result of being geographically separated from each other. Eventually, they can no longer interbreed, and at that point a new species has formed. Yet if the two groups continued to live near each other, it's likely that mating attempts between naturally varying members of the two populations would tend to allow the species to merge again. This is called "gene flow" between the two groups. What keeps this from happening, and what allows new species to arise and endure, are what are known as "isolating mechanisms. " Dresser crab camouflage - Weird Nature - BBC wildlife. The Amazing Peacock Spider. Scientists Discover Dung Beetles Use The Milky Way For GPS. A team of scientists has discovered that dung beetles climb on dung balls and dance around in circles before taking off. 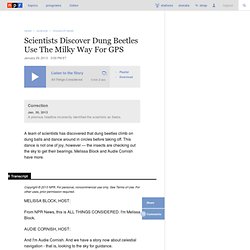 This dance is not one of joy, however — the insects are checking out the sky to get their bearings. Melissa Block and Audie Cornish have more. Copyright © 2013 NPR. For personal, noncommercial use only. See Terms of Use. From NPR News, this is ALL THINGS CONSIDERED. And I'm Audie Cornish. BLOCK: But before we get too lofty, this story also happens to be about dung beetles. ERIC WARRANT: Dung beetles and their grubs eat dung and everything about dung beetles has to do with dung in some form. BLOCK: That's professor Eric Warrant. CORNISH: Five years ago, he and a group of other scientists began studying the remarkable navigational skills of dung beetles. BLOCK: That's right - lazy dung beetles. WARRANT: It's a little bit like kicking the ball back into your own goal posts. Microsoft Word - E&BE_07_EvolveSoc.doc - E&BE_07_EvolveSoc.pdf. Stupider With Monogamy.