List of cognitive biases. Cognitive biases are tendencies to think in certain ways that can lead to systematic deviations from a standard of rationality or good judgment, and are often studied in psychology and behavioral economics. There are also controversies as to whether some of these biases count as useless, irrational or whether they result in useful attitudes or behavior. For example, when getting to know others, people tend to ask leading questions which seem biased towards confirming their assumptions about the person.

This kind of confirmation bias has been argued to be an example of social skill: a way to establish a connection with the other person.[7] The research on these biases overwhelmingly involves human subjects. Dunning–Kruger effect. The Dunning–Kruger effect is a cognitive bias wherein unskilled individuals suffer from illusory superiority, mistakenly assessing their ability to be much higher than is accurate. 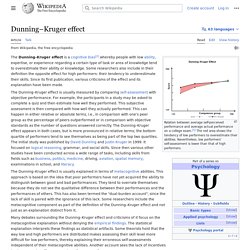 This bias is attributed to a metacognitive inability of the unskilled to recognize their ineptitude. Conversely, highly skilled individuals tend to underestimate their relative competence, erroneously assuming that tasks that are easy for them are also easy for others.[1] Winner's curse. The winner's curse is a phenomenon that may occur in common value auctions with incomplete information. 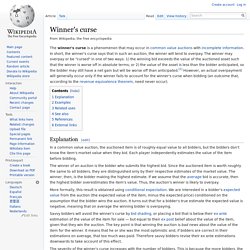 In short, the winner's curse says that in such an auction, the winner will tend to overpay. The winner may overpay or be "cursed" in one of two ways: 1) the winning bid exceeds the value of the auctioned asset such that the winner is worse off in absolute terms; or 2) the value of the asset is less than the bidder anticipated, so the bidder may still have a net gain but will be worse off than anticipated.[1] However, an actual overpayment will generally occur only if the winner fails to account for the winner's curse when bidding (an outcome that, according to the revenue equivalence theorem, need never occur). 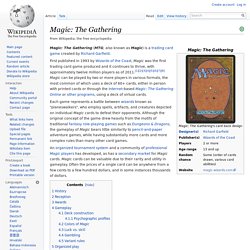 First published in 1993 by Wizards of the Coast, Magic was the first trading card game produced and it continues to thrive, with approximately twelve million players as of 2011[update].[1][2][3][4][5][6][7][8] Magic can be played by two or more players in various formats, the most common of which uses a deck of 60+ cards, either in person with printed cards or through the Internet-based Magic: The Gathering Online or other programs, using a deck of virtual cards. History[edit] Richard Garfield was a doctoral candidate at University of Pennsylvania when he first started to design the game. During his free time he worked with local volunteer playtesters to help refine the game.

He had been brought on as an adjunct professor at Whitman College in 1991 when Peter Adkison (then CEO of Wizards of the Coast games company) first met with Garfield to discuss Garfield's new game RoboRally. Dota 2 Wiki. Dota 2 is played in matches involving two teams of five players, each of which occupies a stronghold at a corner of the map. 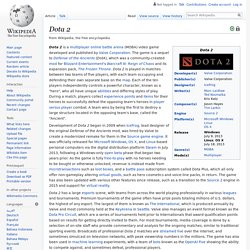 Each stronghold contains a building called the "Ancient", which the opposite team must destroy to win the match. Each player controls a "Hero" character and focuses on leveling up, collecting gold, acquiring items and fighting against the other team to achieve victory. Gameplay A game of Dota 2 in progress.

A team coordinates a defense alongside departing allied creeps. Riot Games Wiki. Riot Games is an American video game publisher that was established in 2006. 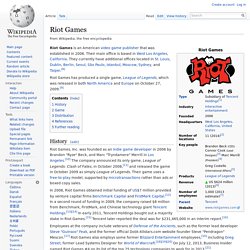 Their main office is based in West Los Angeles, California. They currently have additional offices located in St. Louis, Dublin, Berlin, Seoul, São Paulo, Istanbul, Moscow, Sydney, and Taipei.[8] Riot Games has produced a single game, League of Legends, which was released in both North America and Europe on October 27, 2009.[9] History[edit] Riot Games, Inc. was founded as an Indie game developer in 2006 by Brandon "Ryze" Beck, and Marc "Tryndamere" Merrill in Los Angeles.[10] The company announced its only game, League of Legends: Clash of Fates, in October 2008,[11] and released the game in October 2009 as simply League of Legends. 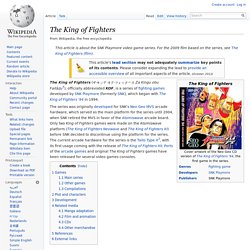 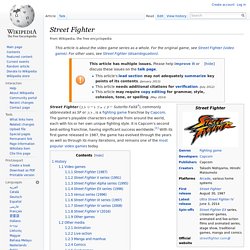 , commonly abbreviated as SF or スト, is a fighting game franchise by Capcom. The game's playable characters originate from around the world, each with his or her own unique fighting style. It is Capcom's second best-selling franchise, having significant success worldwide.[1] With its first game released in 1987, the game has evolved through the years as well as through its many iterations, and remains one of the most popular video games today.