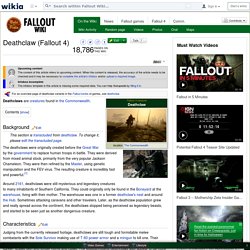 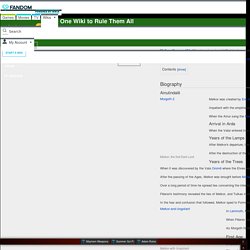 Seithr - BlazBlue Wiki - Your Bluepedia about the BlazBlue universe. Seithr (魔素, Maso, Magic Element), in BlazBlue is a substance that covers the planet. 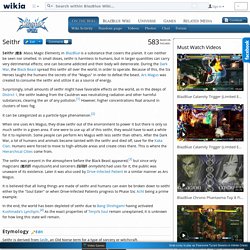 It can neither be seen nor smelled. In small doses, seithr is harmless to humans, but in larger quantities can carry very detrimental effects; one can become addicted and their body will deteriorate. Aether. "Sire, the Aether, shall we destroy it? 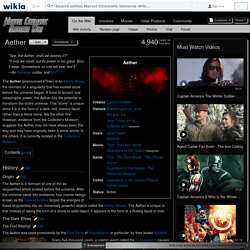 ""If only we could, but its power is too great. Bury it deep. Somewhere no one will ever find it. " Arceus. From Bulbapedia, the community-driven Pokémon encyclopedia. 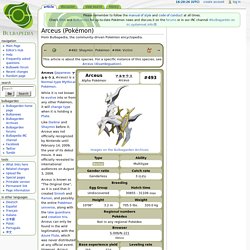 While it is not known to evolve into or from any other Pokémon, it will change type when it is holding a Plate.

Jenova - The Final Fantasy Wiki - 10 years of having more Final Fantasy information than Cid could research! October 2014 Jenova was a Calamity that fell from the sky a long, long time ago, and tried to destroy the planet... 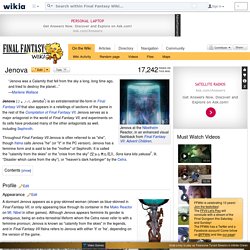 —Marlene Wallace Throughout Final Fantasy VII Jenova is often referred to as "she", though Ifalna calls Jenova "he" (or "it" in the PC version). Jenova has a feminine form and is said to be the "mother" of Sephiroth. Forside - Anarchopedia. Magazines + Sites. ITER. Coordinates: The project is funded and run by seven member entities — the European Union, India, Japan, People's Republic of China, Russia, South Korea and the United States. 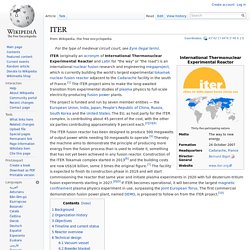 The EU, as host party for the ITER complex, is contributing about 45 percent of the cost, with the other six parties contributing approximately 9 percent each.[2][3][4] The ITER fusion reactor has been designed to produce 500 megawatts of output power while needing 50 megawatts to operate.[5] Thereby the machine aims to demonstrate the principle of producing more energy from the fusion process than is used to initiate it, something that has not yet been achieved in any fusion reactor. Background[edit] Fusion power has the potential to provide sufficient energy to satisfy mounting demand, and to do so sustainably, with a relatively small impact on the environment. Nuclear fusion has many potential attractions. Organization history[edit] Objectives[edit] Timeline and current status[edit] Reactor overview[edit] Avatar: The Last Airbender characters, episodes, elements, and more! Q Continuum.

For the CCG expansion with a similar name, please see CCG: Q-Continuum. 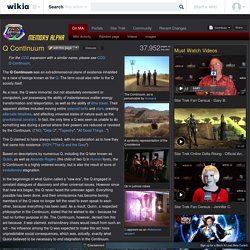 As a race, the Q were immortal, but not absolutely omniscient or omnipotent, just possessing the ability of instantaneous matter-energy transformation and teleportation, as well as the ability of time travel. Their apparent abilities included moving entire asteroid belts and stars, creating alternate timelines, and affecting universal states of nature such as the gravitational constant. Society for Scientific Exploration. WikiLeaks. Search WikiLeaks. Hammerspace. Examples of Hammerspace pictured in a WikiWorld cartoon Hammerspace (also known as malletspace) is a fan-envisioned extradimensional, instantly accessible storage area in fiction, which is used to explain how animated, comic, and game characters can produce objects out of thin air. 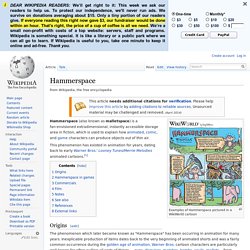 This phenomenon has existed in animation for years, dating back to early Warner Bros.' Looney Tunes/Merrie Melodies animated cartoons.[1] Origins[edit] The phenomenon which later became known as "Hammerspace" has been occurring in animation for many years. The term "Hammerspace" itself originates from a gag common in certain anime and manga. Another series that may have led to the term is City Hunter. Another series that made extensive use of hammerspace was Kodomo no Omocha, where the mother of the main character would pull toy hammers of varying sizes to tap her daughter on the head to forge breaks in her ranting and offer a chance to glean understanding and wisdom. Hammerspace in games[edit] Commercials[edit] Magic satchel. In role-playing video games, a magic satchel is a character's inventory in the game. 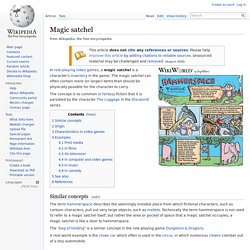 The magic satchel can often contain more (or larger) items than should be physically possible for the character to carry. The concept is so common in fantasy fiction that it is parodied by the character The Luggage in the Discworld series. Speed Force. A physical representation of the Speed Force. Panel from Impulse #66. Artwork by Ethan Van Sciver. The ability to access the Speed Force has been limited to only a few individuals in the DC Universe and when DC characters travel to the Marvel Universe, they are unable to access the Speed Force. The Speed Force has most often been discovered or accessed by accident as in the hard-water radiation accident which gave the Golden Age Flash, Jay Garrick, his powers.

(Pre-Crisis) Barry Allen and Wally West acquired their powers from an accident in a laboratory (later retconned to be Barry travelling through time to give his powers to himself) (Pre-Crisis) A.M.A.Z.O. - DCAU Wiki: your fan made guide to the DC Animated Universe. A.M.A.Z.O., better known simply as The Android or Profesor Ivo's Android, was a nanotechnogical creation of the late Professor Ivo. Amazo's nanotechnology enabled him to copy any trait and characteristic of people and objects, by merely looking at them. History Origins Amazo was found by Lex Luthor, when looking for Professor Ivo to repair his battlesuit. The Android was protecting Ivo's corpse. PowerPedia:Testatika. From PESWiki Update, September 2012: I called the Methernitha commune about coming for a visit, and learned that 1) the inventor passed away a couple of years ago, 2) no one at the commune is continuing with the technology, 3) they don't know who has knowledge about how the system works.

They didn't seem interested in propagating it in any way. -- Sterling D. Allan. The Master - Tardis Data Core, the Doctor Who Wiki. The Master - known by many other temporary aliases — was a renegade Time Lord and the Doctor's arch-enemy. Biography edit Early life edit.