US of A vs. Private Chelsea Manning 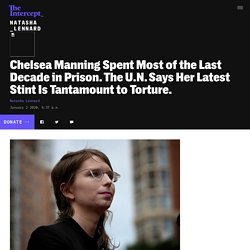 Army intelligence analyst Chelsea Manning addresses reporters before entering the Albert Bryan U.S. federal courthouse in Alexandria, Va., on May 16, 2019. Photo: Win McNamee/Getty Images On New Year’s Eve, as personal reflections on the last decade flooded in, Chelsea Manning’s account tweeted that she had spent 77.76 percent of her time since 2009 in jail. That same day, the United Nations Special Rapporteur on Torture Nils Melzer publicly released a letter from late last year accusing the United States of submitting Manning to treatment that is tantamount to torture.

“Such deprivation of liberty does not constitute a circumscribed sanction for a specific offense, but an open-ended progressively severe measure of coercion.” The Law Says Chelsea Manning Must Be Freed From Prison. Former U.S. 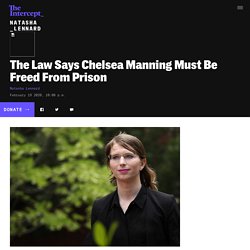 Army intelligence analyst Chelsea Manning arrives at the Albert Bryan U.S Courthouse on May 16, 2019, in Alexandria, Va. Photo: Win McNamee/Getty Images To observe Chelsea Manning’s actions over the last months is to know that she will not be coerced. She could have avoided her current incarceration at Alexandria Detention Center in Virginia, where she has been held for nearly a year. She could have freed herself at any point. Chelsea Manning Ordered Free From Prison. Chelsea Manning, photographed in Washington, D.C., in January 2018. 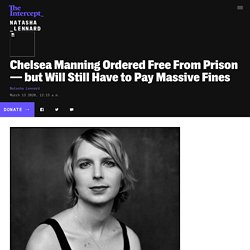 Photo: Jesse Dittmar/Redux On Thursday afternoon, a District Court judge in Virginia ordered that Chelsea Manning be released from jail, where she has been held since last May for refusing to testify before a grand jury. The ruling itself is striking in what it fails to recognize. “The court finds Ms. Manning’s appearance before the Grand Jury is no longer needed, in light of which her detention no longer serves any coercive purpose,” the judge noted. She endured months of extreme suffering, driving her to near death, but never wavered on her principled refusal to speak. While Manning’s release is vastly long overdue and most welcome, the framing and timing of the decision are galling. Glenn Greenwald: Chelsea Manning’s Refusal to Testify Against WikiLeaks Will Help Save Press Freedom. 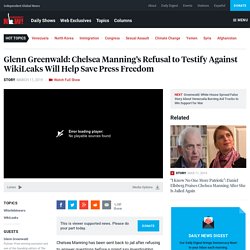 Copy may not be in its final form. AMY GOODMAN: Music by Mangueira, Brazil’s most famous samba school. Last week, Mangueira won Carnival in Rio de Janeiro, getting a perfect score from judges for its float honoring Rio Councilwoman Marielle Franco, who was assassinated almost a year ago. This is Democracy Now! “I Know No One More Patriotic”: Daniel Ellsberg Praises Chelsea Manning After She Is Jailed Again. This is a rush transcript. 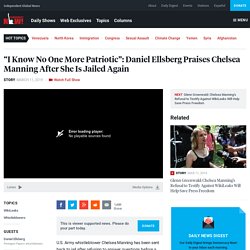 Copy may not be in its final form. AMY GOODMAN: U.S. Duffelblog. Log In. Photo Chelsea Manning, who confessed to disclosing archives of secret diplomatic and military documents to WikiLeaks in 2010 and has been incarcerated longer than any other convicted leaker in American history, has formally petitioned President Obama to reduce the remainder of her 35-year sentence to the more than six years she has already served. 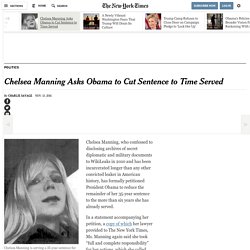 In a statement accompanying her petition, a copy of which her lawyer provided to The New York Times, Ms. US Army Blocks Chelsea Manning From Reading EFF Posts. The United States Army has blocked U.S. 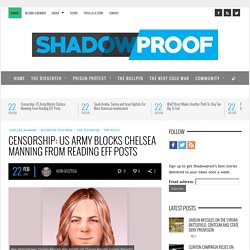 Army whistleblower Chelsea Manning, who is in prison at Fort Leavenworth, from reading printouts of posts from the Electronic Frontier Foundation’s website. Ironically, most of the materials dealt with the issue of prison censorship. Manning is serving a thirty-five year prison sentence at Leavenworth. She was convicted of offenses stemming from her decision to provide WikiLeaks over a half million U.S. government documents, which exposed war crimes, diplomatic misconduct, and other instances of wrongdoing and questionable acts by U.S. officials.

The Electronic Frontier Foundation is an organization, which fights for digital freedom and defends privacy rights. “This included several articles regarding the free speech rights of inmates, as well as the text of our formal comments to the Federal Communications Commission on proposed regulations of inmate telecommunications services providers,” Cohn described in a letter sent to Fort Leavenworth. Declaring Chelsea Manning’s Voice against Torture Contraband. Manning tweeted this picture as the last taken before she began hormonal therapy. 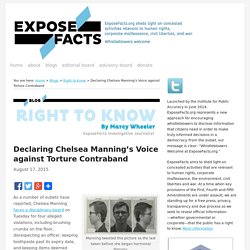 As a number of outlets have reported, Chelsea Manning faces a disciplinary board on Tuesday for four alleged violations, including brushing crumbs on the floor, disrespecting an officer, keeping toothpaste past its expiry date, and keeping items deemed contraband, including the Vanity Fair issue on Caitlyn Jenner. Manning will not have a lawyer at the hearing, and over the weekend authorities refused her access to the prison law library. She may receive indefinite solitary confinement as punishment for these absurd alleged offenses. Along with that list of seemingly trivial items, Leavenworth officials also confiscated an item that goes to the core of the whistleblowing that landed Manning in prison in the first place: the Senate Torture Report. Manning hasn’t ceased her efforts to hold the US accountable for its involvement in torture. Chelsea Manning could face indefinite solitary confinement for possessing Caitlyn Jenner’s Vanity Fair and an expired tube of toothpaste. 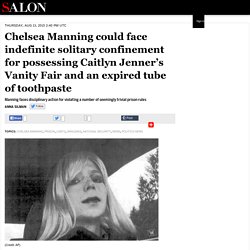 Manning, formerly known as Bradley Manning before her transition, was an intelligence analyst who was sentenced to 35 years in Fort Leavenworth in 2013 after leaking more than 700,000 classified documents to Wikileaks that she acquired while stationed in Iraq. Manning is being charged with violating prison rules, including possessing prohibited items like the Caitlyn Jenner issue of Vanity Fair, “I am Malala,” the Senate torture report, Transgender Studies Quarterly, and copies of The Advocate and Out Magazines. She is also being charged with possessing a tube of expired toothpaste, which falls into the category of “medicine misuse.” Admin Error Sends Bradley Manning to Death Row, Nidal Hasan to Gender Reassignment Surgery.

FT LEAVENWORTH, KS — An administrative error has been blamed for a mix-up in sentencing involving the cases of convicted Fort Hood shooter Maj. 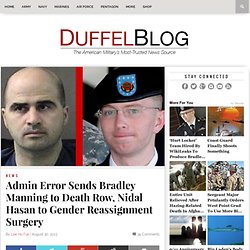 Nidal Hasan and Bradley Manning, the Army private convicted of leaking classified documents to the website WikiLeaks. After sentencing concluded last Wednesday in Fort Hood, Texas, it was reported Hasan would undergo gender reassignment surgery and change his name from Nidal to Nahid Hasan. Nahid is an Arabic name meaning “one with full, round breasts.” Not long after it was revealed, the traitor formerly known as Chelsea had been transferred to death row where he awaits execution by lethal injection. Leavenworth officials announced that both gender reassignment and execution have been approved by fiscal offices.

Sequestration and work furloughs were also cited as possible contributors to the errors, which are now fiscally and administratively impossible to correct. Bradley Manning Was Offered Plea Deal In Exchange For Testimony. FORT MEADE, Md. -- Speaking to reporters just hours after his client was sentenced to 35 years in prison, Bradley Manning's lawyer revealed on Wednesday that military prosecutors offered his client a plea deal in exchange for his testimony. But that deal involved a longer sentence than the 35 years Manning ultimately received, said defense attorney David Coombs, and "part of that would be to cooperate in testifying, so obviously we didn't do that. " Plea negotiations were confidential, and Coombs did not say explicitly that prosecutors had been seeking testimony against WikiLeaks and its founder, Julian Assange.

However, there is little else Manning would have had to offer. And Coombs has previously stated that the government was trying to force his client to act as a witness against Assange in a plea deal, but had not revealed the terms of that offer. A request for comment from the prosecutors' office was not immediately returned. Also on HuffPost: What Bradley Manning Revealed. “In no case shall information be classified… in order to: conceal violations of law, inefficiency, or administrative error; prevent embarrassment to a person, organization, or agency… or prevent or delay the release of information that does not require protection in the interest of the national security.”

Judge Lind released her ‘Special Findings’ report in the Manning trial today. Pic by C. Stoeckley. Sentencing Phase of Bradley Manning’s Trial, Day 8 (Live Updates) The prosecution calls its final two witnesses during the sentencing phase of the Bradley Manning trial. Pic by Stoeckley. What's Bradley Manning Sorry For? Secrecy Surrounds Evidence Of Harm From WikiLeaks Disclosures. WASHINGTON -- His words were straightforward: "I am sorry. Bradley Manning Proposed for Nobel Peace Prize. PFC Bradley Manning: Is PFC Bradley Manning a hero, or is he a villain? Why. Manning verdict: What you need to know. “I believed that if the general public, especially the American public, had access to the information contained within [the military’s own databases], it could spark a domestic debate on the role of the military and our foreign policy in general as it related to Iraq and Afghanistan.” That is — according to a statement Bradley Manning made before to the judge in his court martial, Colonel Denise Lind, on February 28 — what first led Manning to begin to leak large volumes of information to WikiLeaks: a desire to make Americans aware of the potential blowback of our counterinsurgency and counterterrorism policies.

Today, Lind found Manning guilty of 20 charges for that effort to inform the American people of the policies pursued in their name. But, in a hugely significant development, she also ruled that he was not guilty of the charge of aiding the enemy. The verdict was revealed with silence and a delay, as the Army imposed new reporting rules on the press, citing earlier “shenanigans.” Kevin Gosztola: Behind the Scenes of the Bradley Manning Trial Ignored by Corporate Media. Lost in the Bradley Manning Narrative: What He Actually Leaked. Did the Mainstream Media Fail Bradley Manning? Bradley Manning trial: 10 revelations from Wikileaks documents on Iraq, Afghanistan, Pakistan, and Europe.

As Bradley Manning Trial Begins, Press Predictably Misses the Point. Taibbi: Press Predictably Misses The Point In Manning Trial. Bradley Manning Is Guilty of “Aiding the Enemy” – If the Enemy Is Democracy. Of all the charges against Bradley Manning, the most pernicious — and revealing — is “aiding the enemy.” A blogger at The New Yorker , Amy Davidson, raised a pair of big questions that now loom over the courtroom at Fort Meade and over the entire country: Journalists file suit against Manning trial secrecy. Judge Allows Prosecution To Call Bin Laden Team Member In WikiLeaks Case. FORT MEADE, Md. -- A military judge cleared the way Wednesday for a member of the team that raided Osama bin Laden's compound to testify at the trial of an Army private charged in a massive leak of U.S. secrets to the WikiLeaks website.

Col. Denise Lind ruled for the prosecution during a court-martial pretrial hearing for Pfc. Evidence al-Qaida “received” WikiLeaks information permitted in Manning trial. On the first day of the latest round of pre-trial hearings in the Bradley Manning court martial proceedings, military judge Col. Denise Lind ruled that the government would be permitted to use evidence that al-Qaida and specifically Osama bin Laden “received” material published by WikiLeaks as a part of the prosecution’s most serious charge — that Manning “aided the enemy.” Did the Mainstream Media Fail Bradley Manning? Freedom of the Press Foundation Publishes Leaked Audio of Bradley Manning’s Statement. Glenn Greenwald on Bradley Manning: Prosecutor Overreach Could Turn All Whistleblowing into Treason. WikiLeaks Whistleblower Bradley Manning Says He Wanted to Show the Public the "True Costs of War"