It's F.O.S.S. — Open Source News, Tips And Tutorials. Data Elixir. The Absolute Minimum Every Software Developer Absolutely, Positively Must Know About Unicode and Character Sets (No Excuses!) By Joel Spolsky Wednesday, October 08, 2003 Ever wonder about that mysterious Content-Type tag? 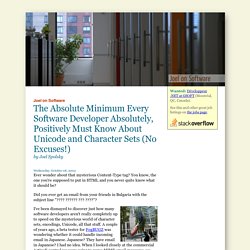 You know, the one you're supposed to put in HTML and you never quite know what it should be? Did you ever get an email from your friends in Bulgaria with the subject line "???? ?????? I've been dismayed to discover just how many software developers aren't really completely up to speed on the mysterious world of character sets, encodings, Unicode, all that stuff. But it won't. So I have an announcement to make: if you are a programmer working in 2003 and you don't know the basics of characters, character sets, encodings, and Unicode, and I catch you, I'm going to punish you by making you peel onions for 6 months in a submarine.

And one more thing: In this article I'll fill you in on exactly what every working programmer should know. A Historical Perspective The easiest way to understand this stuff is to go chronologically. And all was good, assuming you were an English speaker. Unicode Hello. Learn to code. Learning Python, Linux, Java, Ruby and more with Videos, Tutorials and Screencasts. Deux développeurs en vadrouille qui se sortent les doigts du code.

The BiT Bang Theory. Eli Bendersky's website. Walking Randomly. Thompson's Technological Insight. Be Myself. Le blog de Rémi. Tips For Versatile Coders. Apolitically Incorrect. Newsweek has a fascinating article about an archaeological site at Göbekli Tepe in Turkey that is well worth a look. 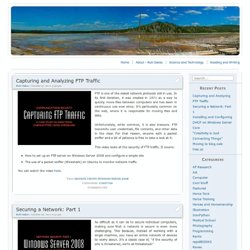 The site is the oldest religious temple ever discovered. Preliminary carbon dating has determined that some of the artifacts date from 9,400 BC, which makes the place about 11,500 years old. (Which, just to be clear, is 7000 years before the Great Pyramid and 6500 years before Stonehenge.) The article further explains: The ruins are so early that they predate villages, pottery, domesticated animals and even agriculture – the first embers of civilization. … [It] may be the very first thing that human beings ever built.

And yet, the site is amazing. This quote from Ian Hodder, head of archaeology at Stanford University, summarizes my response pretty well: [Göbekli Tepe] is unbelievably big and amazing, at a ridiculously early date. This doesn’t happen often. Göbekli is literally an outlier in every way. To really put this in perspective, consider the timeline below. Ferdy Christant. A few months ago I took one of the best decisions for JungleDragon in a long while: to open up parts of its operations to the community, by means of moderations tools. 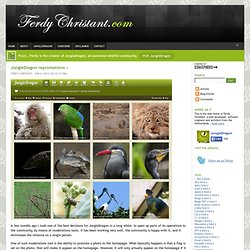 It has been working very well, the community is happy with it, and it eliminates the reliance on a single person. One of such moderations tool is the ability to promote a photo to the homepage. What basically happens is that a flag is set on the photo, that will make it appear on the homepage. DevTricks. William Edwards, Coder. Monday, April 7, 2014 I’m giving a Mill CPU talk in Växjö, Sweden 2014-04-25 There are perhaps a few seats available to interested members of the public if you’re in or near Växjö at the end of the month :) Announcing a presentation at 13.00h, Friday, April 25 at: Linnéuniversitetet (Linnaeus University) Vejdes Plats 6, Linnéuniversitetet Building B, Room 3021 352 52 Växjö Sweden The new Mill CPU architecture A presentation by Will Edwards (Mill Computing) The new Mill CPU architecture brings DSP-like efficiency and performance to general purpose computing. 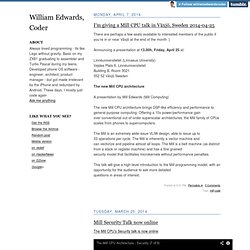 The Mill is an extremely wide-issue VLIW design, able to issue up to 33 operations per cycle. This talk will give a high-level introduction to the Mill programming model, with an opportunity for the audience to ask more detailed questions in areas of interest. Tuesday, March 25, 2014Wednesday, March 12, 2014 Snowden was right about encryption - so what can programmers do about it? And we can do that by encrypting everything. 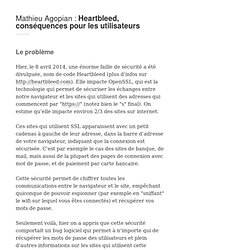 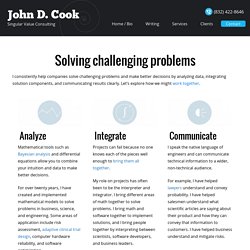 Sounds interesting. I’m a data scientist. Not sure what that means, but it sounds cool. I study machine learning. Hmm. I’m into big data. Even though each of these descriptions makes a different impression, they’re all essentially the same thing. There are distinctions.