The Improv Wiki. Using Nagios with SNMP - ConchShell. This article will show how to setup a custom check with nagios to monitor the mail queue on a set of servers. 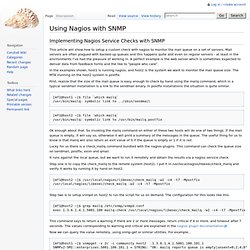 Mail servers are often plagued with backed-up queues and this happens quite alot even on regular servers - at least in the environments I've had the pleasure of working in. A perfect example is the web server which is sometimes expected to deliver data from feedback forms and the like to "people who care". In the examples shown, host1 is running nagios, and host2 is the system we want to monitor the mail queue size. The MTA irunning on the host2 system is postfix. First, realize that the size of the mail queue is easy enough to check by hand using the mailq command, which in a typical sendmail installation is a link to the sendmail binary. 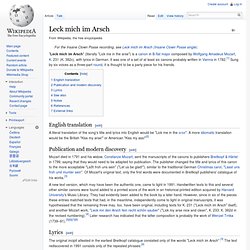 A more idiomatic translation would be the British "Kiss my arse! " or American "Kiss my ass! "[2] Publication and modern discovery[edit] List of inventors killed by their own inventions. Franz Reichelt (d. 1912) attempted to use this contraption as a parachute. 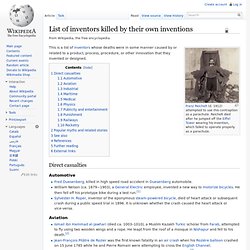 Reichelt died after he jumped off the Eiffel Tower wearing his invention, which failed to operate properly as a parachute. This is a list of inventors whose deaths were in some manner caused by or related to a product, process, procedure, or other innovation that they invented or designed. Direct casualties. Human penis size. Different sized penises of two individuals; in erect (left) and flaccid (right) state The most accurate measurement of the human penis comes from several measurements at different times since there is natural minor variability in size due to arousal level, time of day, room temperature, frequency of sexual activity, and reliability of measurement. 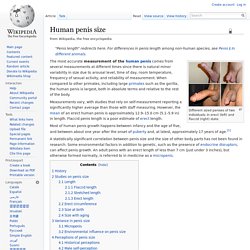 When compared to other primates, including large primates such as the gorilla, the human penis is largest, both in absolute terms and relative to the rest of the body. Measurements vary, with studies that rely on self-measurement reporting a significantly higher average than those with staff measuring. However, the mean of an erect human penis is approximately 12.9–15.0 cm (5.1–5.9 in) in length. Capgras delusion. The delusion most commonly occurs in patients diagnosed with paranoid schizophrenia, but has also been seen in patients suffering from brain injury[4] and dementia.[5] It presents often in individuals with a neurodegenerative disease, particularly at an older age.[6] It has also been reported as occurring in association with diabetes, hypothyroidism and migraine attacks.[7] In one isolated case, the Capgras delusion was temporarily induced in a healthy subject by the drug ketamine.[8] It occurs more frequently in females, with a female:male ratio of 3:2.[9] The information gathered from studying people with the Capgras delusion has theoretical implications for understanding face perception and neuroanatomy in both healthy and unhealthy individuals.[2] History[edit] Presentation[edit] 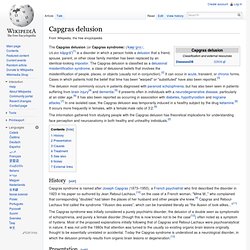 List of conspiracy theories. There are many unproven conspiracy theories of varying degrees of popularity, frequently related to but not limited to clandestine government plans, elaborate murder plots, suppression of secret technology and knowledge, and other supposed schemes behind certain political, cultural, and historical events. 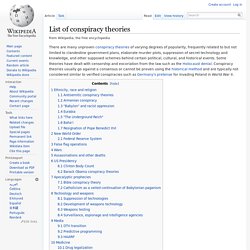 Some theories have dealt with censorship and excoriation from the law such as the Holocaust denial. Conspiracy theories usually go against a consensus or cannot be proven using the historical method and are typically not considered similar to verified conspiracies such as Germany's pretense for invading Poland in World War II. Ethnicity, race and religion[edit] Antisemitic conspiracy theories[edit] Antisemitism has, from the Middle Ages, frequently taken on characteristics of conspiracy theory. Main Page - Gamegrene - Ghyll. The Wikipedia Knowledge Dump (WikiDumper.org) Zamani - The Zamani Wiki is designed as a data... The New Yorker: Fact. 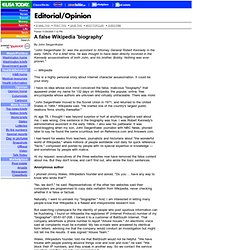 For a brief time, he was thought to have been directly involved in the Kennedy assassinations of both John, and his brother, Bobby. Nothing was ever proven. " — Wikipedia This is a highly personal story about Internet character assassination. I have no idea whose sick mind conceived the false, malicious "biography" that appeared under my name for 132 days on Wikipedia, the popular, online, free encyclopedia whose authors are unknown and virtually untraceable. "John Seigenthaler moved to the Soviet Union in 1971, and returned to the United States in 1984," Wikipedia said. At age 78, I thought I was beyond surprise or hurt at anything negative said about me.