This is an idea along the lines of the indieweb concepts of personal ownership ..

According to wikipedia:
Smallest Federated Wiki is a software platform developed by Ward Cunningham which adds forking features found in software development tools like GitHub to wikis.

The project was launched at IndieWebCamp 2011. The software allows its users to fork wiki pages, maintaining their own copies.

Federation supports what Cunningham has described as "a chorus of voices" where users share content but maintain their individual perspectives. This approach contrasts with the tendency of centralized wikis such as Wikipedia to function as consensus engines. Ward Cunningham's Smallest Federated Wiki Paves Road To Our Curated Future. Ward Cunningham, inventor of the wiki, is percolating another project: The Smallest Federated Wiki. 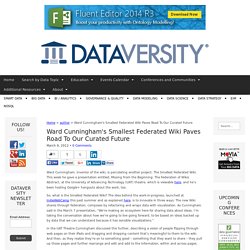 This week he gave a presentation entitled, Missing From the Beginning: The Federation of Wikis Abstract, at the University of Advancing Technology (UAT) theatre, which is viewable here, and he’s been hosting Google+ hangouts about the work, too. So, what is the Smallest Federated Wiki? The idea behind the work-in-progress, launched at IndieWebCamp this past summer and as explained here, is to innovate in three ways: The new Wiki shares through federation, composes by refactoring and wraps data with visualization. As Cunningham said in the March 7 presentation, “We’re making an ecosystem here for sharing data about ideas. I’m taking the conversation about how we’re going to live going forward, to be based on ideas backed up by data that we can understand because it has sensible visualizations.” Federated Education: New Directions in Digital Collaboration. By Mike Caulfield. 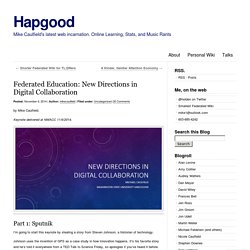 Keynote delivered at NWACC 11/6/2014. Part 1: Sputnik I’m going to start this keynote by stealing a story from Steven Johnson, a historian of technology. Johnson uses the invention of GPS as a case study in how innovation happens. It’s his favorite story and he’s told it everywhere from a TED Talk to Science Friday, so apologies if you’ve heard it before. The way the story goes is this. Meanwhile some physicists at Johns Hopkins are hanging out, and wondering — would it be possible to listen to this satellite?

So a couple of these guys go and fiddle with microwave receiving equipment — they just want to get this ping on tape. And we get really lucky here, because one or another of them says, hey let’s turn this project up to eleven – let’s use the variation of these pings to plot the trajectory of Sputnik around the earth using a mathematical model of the Doppler Effect. So that’s Johnson’s story. This is a letter from Arthur C. Smallest Federated Wiki. Smallest Federated Wiki is a software platform developed by Ward Cunningham which adds forking features found in software development tools like GitHub to wikis.[1] The project was launched at IndieWebCamp 2011.[2] The software allows its users to fork wiki pages, maintaining their own copies. 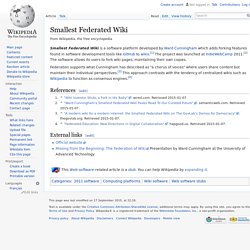 Federation supports what Cunningham has described as "a chorus of voices" where users share content but maintain their individual perspectives.[3] This approach contrasts with the tendency of centralized wikis such as Wikipedia to function as consensus engines.[4] References[edit] External links[edit] Smallest Federated Wiki - IndieWebCamp. This article is a stub. 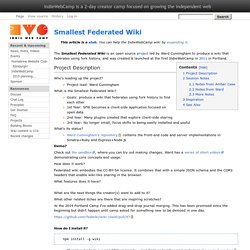 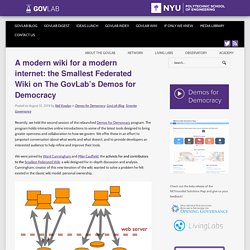 The program holds interactive online introductions to some of the latest tools designed to bring greater openness and collaboration to how we govern. We offer these in an effort to jumpstart conversation about what works and what doesn’t, and to provide developers an interested audience to help refine and improve their tools. Ward Cunningham: Missing from the Beginning on USTREAM: Ward Cunningham will visit on Wednesday 3/7/12. He will be presenting in the theater and on Ustream... Smallest Federated Wiki - IndieWebCamp. Wiki Inventor Sticks a Fork in His Baby. Ward Cunningham, the creator of the wiki, is proud of his invention. 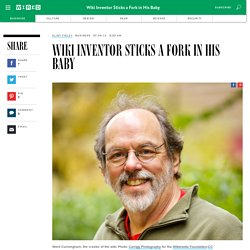 “We changed the world together,” he says of those who contributed to his software development site C2, which spawned the online collaboration software that underpins Wikipedia and countless other services across the net. But there is one thing about the wiki that he regrets. “I always felt bad that I owned all those pages,” he says. The central idea of a wiki — whether it’s driving Wikipedia or C2 — is that anyone can add or edit a page, but those pages all live on servers that someone else owns and controls. Cunningham now believes that no one should have that sort of central control, so he has built something called the federated wiki.

This new creation taps into the communal ethos fostered by GitHub, a place where software developers can not only collaborate on software projects but also instantly “fork” these projects, spawning entirely new collaborations. WardCunningham/Smallest-Federated-Wiki. Smallest Federated Wiki. Fedwiki/wiki-node-server. Fedwiki/wiki-client. Fedwiki/wiki-node. Federated Wiki. Concepts · WardCunningham/Smallest-Federated-Wiki Wiki. Here we describe general concepts and introduce terms that we will use freely in other documentation. 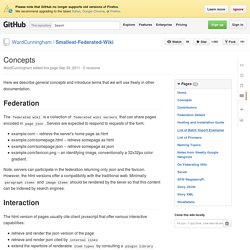 Federation The federated wiki is a collection of federated wiki servers that can share pages encoded in page json. Servers are expected to respond to requests of the form: example.com -- retrieve the server's home page as htmlexample.com/somepage.html -- retrieve somepage as htmlexample.com/somepage.json -- retrieve somepage as jsonexample.com/favicon.png -- an identifying image, conventionally a 32x32px color gradient. Note: servers can participate in the federation returning only json and the favicon. Interaction The html version of pages usually cite client javascript that offer various interactive capabilities: retrieve and render the json version of the pageretrieve and render json cited by internal linksextend the repertoire of renderable item types by consulting a plugin libraryassociate data sources and possible renderings on available pagesperform actions that modify pages.

Links. Frequently Asked Questions. As our end user documentation emerges we can expect there to be many questions. 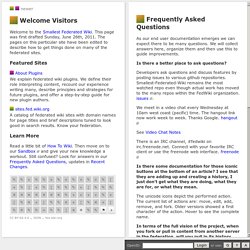 We will collect answers here, organize them and then use this to guide improvements. <b>Is there a better place to ask questions? Developers ask questions and discuss features by posting issues to the GitHub project We meet in a video chat every Wednesday at 10am west coast (pacific) time. We'll post a link here 10 or 15 minutes before we start. hangout There is an IRC channel, #fedwiki on freenode.net. There is a Google Group mailing list. We hold meetups occasionally in Portland.

For announcements. <b>Is there some documentation for those iconic buttons at the bottom of an article? The unicode icons depict the performed action. <b>In terms of the full vision of the project, when you fork or pull in content from another server in the federation, will you pull in its history also?