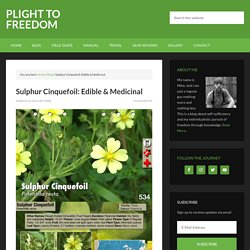 The flowers will remind you of strawberries and this plant does produce fruit but it isn’t widely used by foragers. The fruit is said to be edible raw or cooked and “the unripe fruit is almost as pleasant as the fully ripe fruit.” Medicinally cinquefoils have been used as an astringent, tonic, and febrifuge (fever reducer). It was used for fevers, diarrhea, dysentery, passive hemorrhages and a decoction of the root was gargled for ulcerations of the throat and mouth. Keep your eyes and ears open and your powder dry Sulphur Cinquefoil Sources: Audubon Guides Box Set – Birds, Tree, Wildflowers & Mammals. Felter, Harvey Wickes, M.D., and John Uri Lloyd, Phr. Hamel, Paul B. and Mary U. Moerman Daniel E., Native American Ethnobotany, Portland: Timber Press. 1998. What is Cinquefoil? - Alternative Nature Online Herbal. 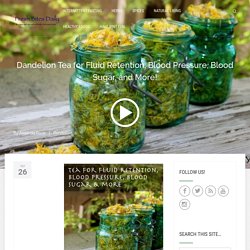 It’s springtime for all intents and purposes here in California. We’re recovering from winter around here, trying to get some fresh air and exercise as our bodies adjust to the beginning of the pollen onslaught. A friend asked me about fluid retention — she’s retaining a lot of water right now and she’s trying to figure out why. 6 Benefits of Stinging Nettle (Plus Side Effects) Stinging Nettles - Gathering and Making Nettle Tea. PlantSnap Blog - Plantsnap Blog. PlantSnap - Plant Identifier App. 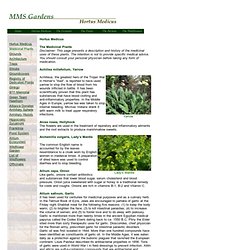 The intention is not to provide specific medical advice. You should consult your personal physician before taking any form of medication. Achillea millefolium, Yarrow Achilleus, the greatest hero of the Trojan War in Homer’s “Iliad”, is reported to have used yarrow to stop the flow of blood from his wounds inflicted in battle. Alcea rosea, Hollyhock The flowers are used in the treatment of repiratory and inflammatory ailments and the root extracts to produce marshmallow sweets.

Alchemilla vulgaris, Lady’s Mantle The common English name is accounted for by the leaves resemblance to a cloak worn by English women in medieval times. Allium cepa, Onion Like garlic, onions contain antibiotics and substances that lower blood sugar, serum cholesterol and blood pressure. Althea officinalis, True Marshmallow It is a native of Asia that has been naturalized in America.

Dogs with Sherri: Poison Ivy, Oak or Sumac. What did you get for Christmas? 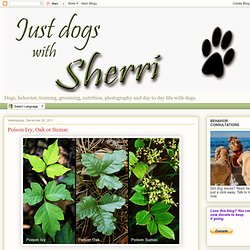 I got poison oak, ivy or sumac; nice eh? I'm not sure if I will post an image or not, it's pretty scary. Yesterday I had to run out to the store for a few things but opted not to because my face was oozing. Even a split second having to glance at an oozing face is a bit much to ask of the general public I believe. So I stayed home and slathered calamine lotion all over it. This case of erupting rash is smack dab on my face. I am highly sensitive to the stuff, it sucks big time.

This left me pondering as to why my dogs never got any itchy, oozing poison yet generously gave it to me. The toxic substance in any of these poisons is urushiol, the dreaded oil that delivers the rash. Six.Healing%20Plants. Art of Manliness. 41 Camping Hacks That Are Borderline Genius - BuzzFeed Mobile. A Summary of the Hydrologic Cycle: bringing all the pieces together. 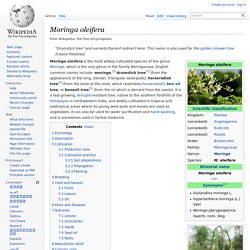 This name is also used for the golden shower tree (Cassia fistulosa) Moringa oleifera is the most widely cultivated species of the genus Moringa, which is the only genus in the family Moringaceae. English common names include: moringa,[2] drumstick tree[2] (from the appearance of the long, slender, triangular seed-pods), horseradish tree[2] (from the taste of the roots, which resembles horseradish), ben oil tree, or benzoil tree[2] (from the oil which is derived from the seeds).

It is a fast-growing, drought-resistant tree, native to the southern foothills of the Himalayas in northwestern India, and widely cultivated in tropical and subtropical areas where its young seed pods and leaves are used as vegetables. It can also be used for water purification and hand washing, and is sometimes used in herbal medicine.