What it Really Means to Hold Space for Someone 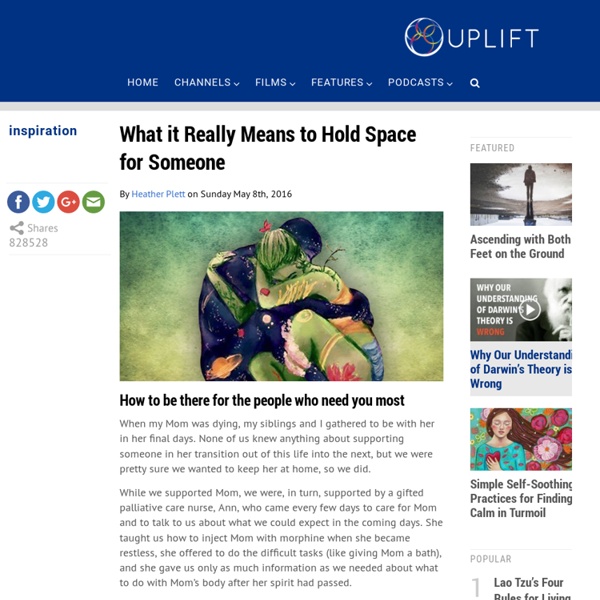 When my Mom was dying, my siblings and I gathered to be with her in her final days. None of us knew anything about supporting someone in her transition out of this life into the next, but we were pretty sure we wanted to keep her at home, so we did. While we supported Mom, we were, in turn, supported by a gifted palliative care nurse, Ann, who came every few days to care for Mom and to talk to us about what we could expect in the coming days. She taught us how to inject Mom with morphine when she became restless, she offered to do the difficult tasks (like giving Mom a bath), and she gave us only as much information as we needed about what to do with Mom’s body after her spirit had passed. The author with her mother “Take your time,” she said. Ann gave us an incredible gift in those final days. In the two years since then, I’ve often thought about Ann and the important role she played in our lives. Learning to hold space for others What does it mean to “hold space” for someone else? 1. 2.

The Powerful Predictor Behind Successful Relationships When does a broken relationship start to go wrong? Whatever you’re thinking — an awkward conversation with your boss, the white lie you told about being busy that was discovered, the time you were supposed to be out with friends but were really somewhere else — you’re probably wrong. These seemingly big moments are not the defining ones that make or break relationships. Eudaimonia Discussion of the links between virtue of character (ethikē aretē) and happiness (eudaimonia) is one of the central concerns of ancient ethics, and a subject of much disagreement. As a result there are many varieties of eudaimonism. Two of the most influential forms are those of Aristotle[3] and the Stoics. Aristotle takes virtue and its exercise to be the most important constituent in eudaimonia but acknowledges also the importance of external goods such as health, wealth, and beauty.

To Stop the Abuse of Women, We Also Have to Stop the Abuse of Men - At this watershed cultural moment, the #MeToo movement is finally breaking through that wall of institutionalized sexism and seemingly impenetrable power. To combat the powerful cultural dynamics that have so often silenced victims of sexual abuse and harassment, we understand that it is important to believe victims. #IBelieveYou can be a powerful force for active allies to begin to help address widespread and systemic abuse. Our society hasn’t culturally conditioned women to make accusations against men. Quite the opposite: It conditions women NOT to speak up.

Russian News Documentary Confirms that Nibiru Is Headed Towards Planet Earth Nibiru is Sumerian for 12th Planet From ancient Sumerian texts, there was a description that our creators came from a yet discovered planet that enters our Solar System ever 3,600 years. The texts said that they were known as the Nephilim, and that they had colonized Earth over 400,000 years ago. The bible also mentions this race, and calls them the “sons of God”. about — THE WAY WE MET My name is Brooklyn Sherman. I was born and raised in Detroit and now happily reside in Los Angeles, California. I have always been a hopeless romantic who loves to talk about relationships. Are Boundaries Overrated? “Be independent.” “Learn to manage on your own.” “Have a strong sense of self.” These are values strongly held by Americans and promoted by most mental health professionals. I first got a tickle of an idea that this might not be the only way to live when I married into an Indian family and spent time in Mumbai. Their consideration of the group could border on the absurd, yet when someone made a major life screw-up, they rallied around and held him close.

26 ‘Habits’ of People With Depression While depression can be in some ways the absence of action, there are still little habits, little routines, a person may pick up on when they re-enter a depressive episode. These habits can be small indicators you’re beginning to feel depressed again. They can even be positive things — habits developed to help you survive.

Dead Government Agent Reveals Horrific Information Soon to Affect All U.S. Citizens “The America I grew up in, and cherished, has been murdered by its own federal government. Our Constitution has become meaningless and our laws politicized so badly, they are no longer enforced except for political purposes” the note said. ”Our elected officials are, to a person, utterly corrupt and completely devoid of any love or respect for the country which pays them. To them, everything is about getting and keeping power, and making illicit money from backroom deals.” Excerpt From Original Article (Below) 10 Insights of Remarkable Parents from a Family Therapist At any given time you’ll find four or more parenting books on my Amazon wish list, a few by my nightstand, and an email box chock full of insightful parenting theories and approaches. Granted, child development is my career, but I speak with plenty of parents in my practice who find themselves in similar circumstances. With information around every corner and our culture projecting constant messages (many times contradictory) regarding how we should raise our kids, feeling like a confident and intentional parent can seem out of reach many days. In my 12 years as a family therapist, I’ve seen many well-intentioned parents mistakenly employing strategies that aren’t meeting the emotional or developmental needs of their children or families. I’ve also observed an increasing number of parents who are successfully mapping out new and healthier ways of raising children. 1 | Know that kids will act like kids.

This Is How To Read People: 5 Secrets Backed By Research We’d all like to learn how to read people like Sherlock Holmes. And research shows understanding things like body language is even more powerful than you might think. MIT found that the outcome of negotiations could be predicted by body language alone 87% of the time. From The Charisma Myth: How Anyone Can Master the Art and Science of Personal Magnetism: TiHKAL TIHKAL: The Continuation is a 1997 book written by Alexander Shulgin and Ann Shulgin about a family of psychoactive drugs known as tryptamines. A sequel to PIHKAL: A Chemical Love Story, TIHKAL is an acronym that stands for "Tryptamines I Have Known and Loved." Content[edit]