Magazine - Is Google Making Us Stupid? 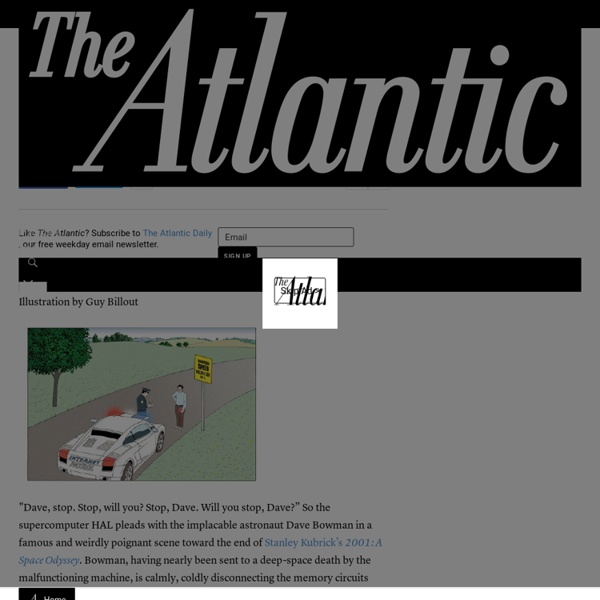 Illustration by Guy Billout "Dave, stop. Stop, will you? Stop, Dave. Will you stop, Dave?” So the supercomputer HAL pleads with the implacable astronaut Dave Bowman in a famous and weirdly poignant scene toward the end of Stanley Kubrick’s 2001: A Space Odyssey. I can feel it, too. I think I know what’s going on. For me, as for others, the Net is becoming a universal medium, the conduit for most of the information that flows through my eyes and ears and into my mind. I’m not the only one. Bruce Friedman, who blogs regularly about the use of computers in medicine, also has described how the Internet has altered his mental habits. Anecdotes alone don’t prove much. It is clear that users are not reading online in the traditional sense; indeed there are signs that new forms of “reading” are emerging as users “power browse” horizontally through titles, contents pages and abstracts going for quick wins. Reading, explains Wolf, is not an instinctive skill for human beings. Also see:

36 questions to get to know yourself better - imperfections and all. 36 questions to get to know yourself better Earlier this year The New York Times published a list of 36 questions written by psychologist Arthur Aron that new couples or acquaintances can ask each other if they want to fast-track their relationship (or break up, depending on what’s revealed). We wanted to create a similar questionnaire but have the focus be on self-discovery, so we turned to two psychologists who specialize in studying the self: Gary Lewandowski, Ph.D., a professor at Monmouth University in New Jersey, and Brent Mattingly, Ph.D., an assistant professor at Ursinus College in Pennsylvania. They created the questions based on psychological theories and research. The professors recommend that you consider each question carefully and write down your answers to get the most out of the quiz.

Jeffrey Kluger: Why China's Moon Mission Is a Good Thing Nobody gets to the moon by accident. If you’re a rocket scientist and know what you’re doing, Earth’s little sister ought not be such a challenging target. It’s huge — a whopping 2,155 mi. (3,468 km) across. It’s close — a mere 239,000 mi. (385,000 km) from Earthly launch pads. And if you take an as-the-crow-flies route, you can get there in just three days. That’s a walk to the 7-11 in a cosmos in which distances are measured in billions of light years. Technology for diplomacy: A chat with State's Alec R In Congo, e-mails and text messages are being used to warn women and children of attacking rebels nearby. In sub-Saharan Africa, text messages are instructing people how to take HIV medications. In Iran, an online video from President Obama to Iranians on their new year went viral.

Six ways Gmail revolutionized e-mail Mashable's Pete Cashmore says Gmail radically altered expectations of what a webmail client could be. It's the sixth birthday of Google's pioneering e-mail service: Gmail Gmail launched in 2004 with 1 gigabyte of free storage, an inconceivable amount at the time Gmail popularized the use of the "beta" tag on many "web 2.0" products Google's e-mail service also popularized labels, conversation "threads" and archives Editor's note: Pete Cashmore is founder and CEO of Mashable, a popular blog about social media.

What games have to teach us about learning: an interview with James Paul Gee James Paul Gee is one of the primary proponents for games in education. Originally a theoretical linguist, he has become a literacy educator, emphasising the important aspects of learning in game playing. He wrote What Video Games Have To Teach Us About Learning and Literacy and will be presenting at next week's Game Developers Conference in San Francisco. Gamesblog caught up with him before the event to talk games and education. 23 Ways To Treat Yo' Self Without Buying Or Eating Anything - Yes and Yes Here are some ‘treats’ that I regularly give myself because I ‘deserve’ them: * An entire block of Parmesan. Not on something, mind you. Amanda Lindhout, Writer of The House in the Sky, Shares the Story of Her Terrifying Kidnapping in Somalia - Magazine Photographed by Norman Jean Roy, Vogue, September 2013 Kidnapped in Somalia, Amanda Lindhout spent fifteen months in terrifying captivity. Only after meeting journalist Sara Corbett did she feel ready to tell her story. Every life is made up of a series of decisions—good ones, bad ones, opportunities of a lifetime, and those, in retrospect, that look extraordinarily ill considered.

Diplomatic Efforts Get Tech Support - washingtonpost.com Alec Ross arrives today at the State Department, armed with a new set of diplomatic tools including Facebook, text messaging and YouTube. Ross is a senior adviser on innovation to Secretary of State Hillary Rodham Clinton -- a role created for the 37-year-old nonprofit leader, who quickly rose within the Obama campaign, helping to craft tech policy under top technology adviser Julius Genachowski. His new job will blend technology with diplomacy in an attempt to help solve some of the globe's most vexing problems on health care, poverty, human rights and ethnic conflicts. And it is emblematic of the expansive approach the administration has taken to the role of technology in advancing its domestic and global agendas. "Secretary Clinton believes technology is a powerful tool to address the priorities of the State Department, including promoting human rights and vibrant democracies, fostering development and enhancing the impact of smart power," said State Department spokesman Robert Wood.

Astronauts tweet from space - 08 Apr 2010 - Computing Astronauts can now use social networking tools from outer space Nasa has implemented a new project that allows its astronauts to access and update their social networking profiles from space. The US space agency is using technology from enterprise software provider Citrix to create a home-like desktop experience, allowing astronauts to keep in touch with friends, colleagues and family via online social networks. A Citrix XenDesktop with high-definition HDX technology was recently installed on the Crew Support LAN, which provides astronauts on the International Space Station (ISS) with direct, secure access to desktop applications and web sites from any location, including space. The new network incorporates virtual desktops powered by XenDesktop and WAN optimisation technology from Citrix Branch Repeater, which ensures reliable and secure communications. Nasa said that the project is part of an effort to enhance the quality of life for astronauts during long missions.

Watch Digital Media - New Learners Of The 21st Century Online Aired: 02/13/201105:50Expires: 02/13/2015 Rating: NR James Paul Gee, Professor of Literacy Studies in the Department of English at Arizona State University, discusses how complex gaming environments can enrich problem-solving and drive innovation. Extended Interview: Dr. Imagining your future projects is holding you back. Do you have a big creative project in store? Do you lie awake sometimes, thinking about what might go into it, what the characters or environment might look like, how it will touch the audience in a whole new way? Do you imagine what it will feel like to have this project under your belt, and what kind of effect it will have on your life? Let me tell you about Forest Lords. Forest Lords is a series of ten fantasy novels, each a 1000-page brick, about the epic adventures of Greenleaf Barksley, elf proletarian, and his journeys to attain the Golden Leaf and save his homeland from the scourge of the Curse of the Titaness Denox. The thing is, none of this series exists—not even Forest Lords Volume One: The Elven Soul.

The Global Dominance of ESPN - Derek Thompson Josue Evilla “This is the chart I was talking about. This is powerful.” Artie Bulgrin, ESPN’s director of research, is hunched over an iPad in a wood-paneled conference room at the network’s New York City headquarters, on West 66th Street, swooshing through the slides of a presentation he’s prepared annually since 1998. Every year, in the second week of September, the company asks hundreds of random subjects for three “must have” TV networks.

Google implicated in the Orange Revolution I have finally found evidence that the Internet was instrumental in Ukraine's Orange Revolution...Turns out it's all Google's fault! It turns out that when you use Google Translate to translate (from Chinese to Russian) the expression "Vote for Yanukovych" (Yanukovych was Kremlin's favorite candidate), Google gives you "Vote for Yushenko" in the translated version. Global conspiracy orchestrated by Google! Even more intriguing is how spotted the error! It was discovered by Liberty.ru, a site closely associated with the Fund for Effective Politics, a leading pro-Kremlin think-tank headed by Gleb Pavlovsky, one of Yanukovich's cheerleaders. I can only imagine how many painfull months (or years?)