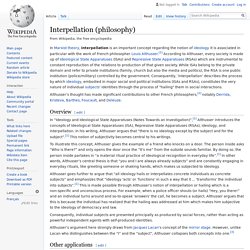 Introducing Herbaria 3.0. “Every species has a narrative of its own, a biography. 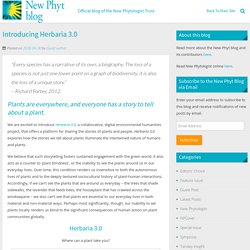 The loss of a species is not just one lower point on a graph of biodiversity, it is also the loss of a unique story.” – Richard Fortey, 2012. Plants are everywhere, and everyone has a story to tell about a plant. We are excited to introduce Herbaria 3.0, a collaborative, digital environmental humanities project, that offers a platform for sharing the stories of plants and people. Herbaria 3.0 explores how the stories we tell about plants illuminate the intertwined nature of humans and plants. We believe that such storytelling fosters sustained engagement with the green world. Herbaria 3.0 Where can a plant take you? 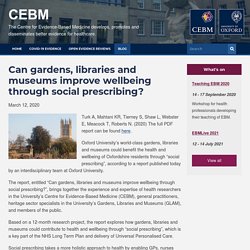 Oxford University’s world-class gardens, libraries and museums could benefit the health and wellbeing of Oxfordshire residents through “social prescribing”, according to a report published today by an interdisciplinary team at Oxford University. The report, entitled “Can gardens, libraries and museums improve wellbeing through social prescribing?” A Lesson in Resilience from Ancient Dates. Date Flasks, 1st–2nd century A.D., Roman. 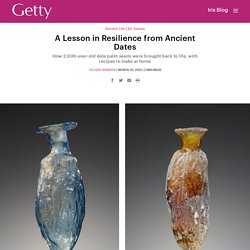 Glass, 2 13/16 × 1 1/4 in. The J. Paul Getty Museum, 2003.333 (left) and 2003.334 (right). Digital images courtesy of Getty’s Open Content Program What does an ancient date taste like? Sarah Sallon, a doctor at the Natural Medicine Research Center in Hadassah, and Elaine Solowey, an expert in arid agriculture, wanted to see if they could germinate the ancient seeds of a date palm excavated at Masada near the Dead Sea. New Plant Species Discovered In Ikea Parking Lot (Really) 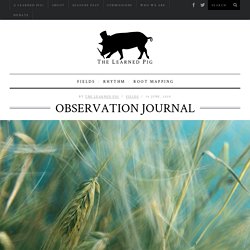 (1) Concierto para el bioceno. Intertwined Histories: Plants in Their Social Contexts - University of Calgary Press. About the Book How do we understand the boundaries of individual creatures? 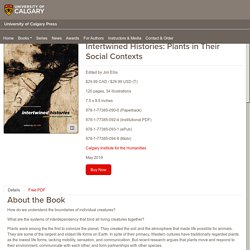 Urban Forests Save Lives. Katherine Mansfield in the Garden: Modernism’s Weird Botany – The Modernist Review. Camilla Bostock, University of Plymouth In an early autobiographical vignette, ‘In the Botanical Gardens’ (1907), the short story writer Katherine Mansfield has a transformative experience. 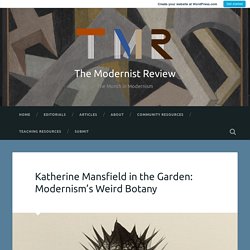 She writes: suddenly it disappears—all the pretty, carefully-tended surface of gravel and sward and blossom, and there is bush, silent and splendid. […] And everywhere, that strange, indefinable scent. Conifer is top tree in urban sound absorption test. Image copyright Ed Suominen/Flickr Scientists say trees have a role to play in combating noise pollution in urban environments and have identified the best species for the job. 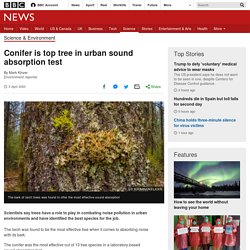 The larch was found to be the most effective tree when it comes to absorbing noise with its bark. The conifer was the most effective out of 13 tree species in a laboratory-based sound absorption test. The researchers say the findings can help urban planners use trees for noise control. You Can Pay People to Style Your Houseplants. Growing up in California, Orion Tait used to watch his father’s weekend housekeeping routine. 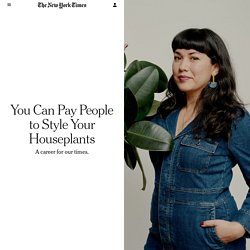 “Sunday was loud music — Neil Young — and my dad going around watering the plants,” Mr. Tait recalled. “He had a deck of plants growing everywhere. It was a ritual.” Mr. “I was, like, this is New York City,” Mr. How 14 flowers got their names. From saucy to the divine, the origins of some flower names add even more to the loveliness of their blooms. 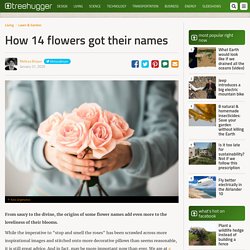 While the imperative to "stop and smell the roses" has been scrawled across more inspirational images and stitched onto more decorative pillows than seems reasonable, it is still great advice. And in fact, may be more important now than ever. We are at a strange place with nature, and it could use all the appreciation we can muster up. The quote may have been intended as a reminder to slow down and enjoy the moment, but I like to think of it as a reminder to revel in the beauty of the natural world, roses and all. With that in mind, appreciation for flowers can easily extend beyond their sublime fragrance. The Role of Leaf Shape on Insect Herbivory. The female weevil begins by walking along the margin of the leaf until she reaches the apex. At that point she walks sideways towards the interior of the leaf until she finds the midrib. She then turns around and walks back toward the leaf base again. She repeats these steps several times on both sides of the leaf until she is satisfied.

At that point, she will take several bites out of the midrib, which causes the leaf to wilt. Four Flowering Plants That Have Been Decidedly Queered. The American “Pansy Craze” of almost 100 years ago cemented the use of that flower’s name as a slang term for queer men. Oscar Wilde earlier turned the green carnation into a symbol for them across the pond by wearing one on his lapel.

Violets were associated with Sappho herself, and the calamus with Walt Whitman. A pre-Stonewall gay bar at the corner of Christopher Street and Gay Street was called The Flower Pot. And of course there’s Georgia O’Keeffe. The Secret Jailhouse Garden of Rikers Island. Set incongruously in the middle of Rikers Island’s post-apocalyptic landscape of low-slung jail blocks and razor wire is a lush garden, teeming with birds and butterflies, that seems to have been teleported down from some happier planet.

“That’s my baby,” said Mike Cruz, a stocky young man who is serving time at Rikers. He was gesturing toward a patch of flowers whose flamboyant shade of orange matched the stripes on his prison jumpsuit. “It’s a Mexican sunflower,” he said. “I put the seeds in myself, and look at it now, it’s five feet tall. You get to watch them grow, you feel good about that. Identifying and tagging urban plants with names written in chalk, directly on the sidewalk. So many aspects to love about this project!

The Planthunter – Written in the Trees: The Roots of Arborglyphs. The Spiritual Life of Plants — The Ethnobotanical Assembly. All these different veins of spirituality are grounded in ecology. They spring from and are substantiated by specific nets of interrelation between humans and other beings. As the base of ecological systems, plants play ubiquitous yet diverse roles in spiritual traditions: as materials, metaphors, teachers, healers and companions. Wherever spiritual practice can be found, from the Catholic sacrament to shamanic soul-calling, plants are present.

It is easy to study an element of culture, such as agriculture or art, without regard to the cosmology that underlies and gives birth to these expressions of understanding. What Is It with Millennials and Cactuses? On the outskirts of Chinatown, in the area of the Lower East Side known as Dimes Square—named for the Canal Street café that slings nouveau health food for scraggle-chic locals—another business was recently preparing to open shop.

This one was not selling baggy nineties-style skatewear or narrow seventies-style men’s neckwear but, rather, a pricklier sort of merchandise: cactuses. Carlos Morera and Max Martin, the proprietors of the Los Angeles-based Cactus Store, were arranging their wares—which included squat and bulbous specimens, abloom with pink flowers; furrowed Yoda-like varieties, fuzzed with chalky bristles; and tall columns with menacing spikes. A young woman in a kerchief was methodically pressing soppy green moss into the soil of a small garden in front of the greenhouse that houses the shop. “Audrey is our plant communicator,” Martin said. Bearded and shod in hiking boots, he had the scruffy but welcoming air of a trail guide. Chips placed in Saguaro to prevent theft.

Microplastics could pose a threat to plants. There’s been plenty of media attention on the threat plastics, especially microplastics, pose to animal life. The Grafted Cactus Origin Story. The best plant stories of 2018 – Andy Murdock. #plantlove » New York Botanical Garden. Murdered man's body found after tree 'unusual for the area' grew from seed in his stomach. Plants Are the World's Dominant Life-Form. Bosco Verticale. The Weird “Moss Balls” That Float By Day And Sink By Night. Trollskogen (The Troll Forest) – Borgholm, Sweden.

The twisted trees of Trollskogen, or “Troll Forest,” are up to 200 years old and look as though they are bewitched. Why young people are filling their homes with plants. Image copyright Daisy Hale / Liz Ward. From Plan to Plant - Plantae Community. The below article is written as an introduction to how genetically engineered plants are made for anyone without a science background and is made to be freely shared. One doesn’t need to take more than a quick scroll through Facebook or Twitter to see that genetically engineered (GE) plants are a hot topic of debate right now. Rheum theplanthunter.com. How to practice 'forest bathing' in a park. Houseplants as home health monitors. For eons, houses and indoor plants have gone together: the first a necessity, and the second an aesthetic feature. Along with pets and humans, houseplants are ubiquitous members in interior “megabiomes” (macroscopic home inhabitants). Take a Walk in the Woods. Doctor's Orders.

Getting it ripe. A Seed Artist Germinates History. A Common Plant With An Odd Pollination Mechanism. Ragweed. Nature as Metaphor. Picking a house plant. Elevating a yard into a garden. Millennials are filling their homes — and the void in their hearts — with houseplants. Houseplants: to support human health/RHS Gardening. High Country Apps. PlantSnap. Missouri Botanical Garden — A new smartphone app launched by Garden curator... Whitaker et al.v8.29 33. The best apps to identify unknown plants and flowers. iNaturalist: An App to Ease Plant Blindness - Botany One. The Serendipitous Discovery of Susan Fereday: A Story about the Impact of Citizen Science. What Makes a Citizen Science Project Successful? A Digital Exhibition. Harvesting Collections for Social and Scientific Benefit: Herbarium of RBGE. Essence of Plantness: ref 2017. Exploring the Nature Pyramid.