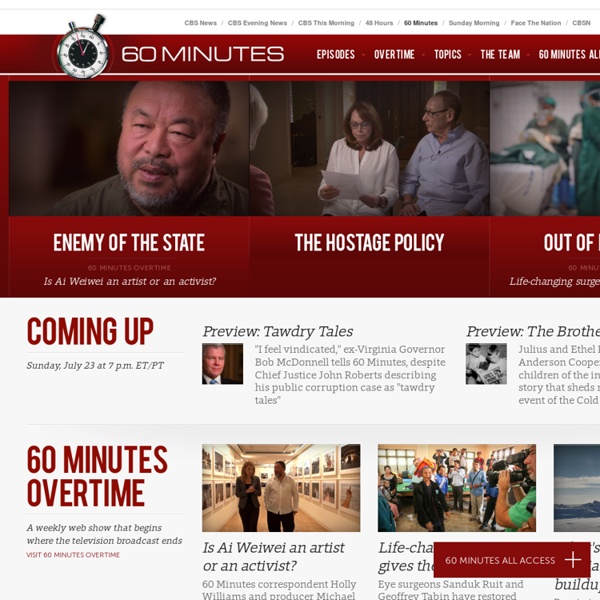 Fukushima: Three years later 60 Minutes Overtime In Fukushima's wake: A radioactive wasteland Pope Francis' first year filled with surprises 60 Minutes Segment Pope Francis, part one Hometown favorite aims to win Boston Marathon 100 hours in the CBS newsroom Editor's Picks Update on "Discovered" An update on a story Morley Safer reported last week about the discovery of the largest trove of missing art since the end of WWII. 60 Minutes/Vanity Fair: Music In this month's poll, many agree this decade has the worst music in the 45 years since Woodstock 60 Minutes Overtime A weekly web show that begins where the television broadcast ends VISIT 60 MINUTES OVERTIME Did the FBI miss a chance to catch Tamerlan? The love letters of the Vatican Library In 2011, Morley Safer toured the manuscripts of the Vatican Library and found love letters from "smitten school boy" Henry VIII Our Community Keni Keta"Fukushima" "@60Minutes Saw this episode tonight. 60 Minutes to go

60 Minutes Overtime Original / April 06, 2014 On the road with the Health Wagon It's not the first time Scott Pelley stepped foot on the beat-up Winnebago where the working poor of Appalachia get free health care Blogging Seems To Have Peaked, Says Pew Report The Pew Internet and American Life Project released its latest report today documenting how different generations use the Internet, and most of the findings won't come as a surprise. Across generations and almost across the board, we're spending more time engaged in online activities, as watching videos, listening to music, and reading the news, for example, become inceasingly popular. The one notable exception: a decline in blogging among teens, with only half as many blogging today as did in 2006. Blogging also declined slightly among adults aged 18-33. Its popularity did increase among older generations, and as a result the result for adult blogging overall went up, from 11% in late 2008 to 14% this year. Wired's Ryan Singel has a great analysis on whether or not we've reached "peak blogging."

The deadly DA. (Harris County, Texas District Attorney John B. Holmes, Jr.) HARRIS COUNTY DISTRICT ATTORNEY JOHN B. Holmes, Jr., isn't shy about his feelings for the death penalty: "There are certain types of offenses committed by certain types of offenders that demand the maximum penalty, " says Holmes. "I say without apology that if you murder someone here, the State of Texas is going to kill you." Home page of English-Chinese (Simplified) Dictionary Select "English-Chinese (simplified)" from the list of dictionaries at the top of any page on Cambridge Dictionaries Online to search this dictionary. Favourite Entries Key Features 140,000 words, phrases, meanings and examples. 37,000 Chinese translations. Secondo me sta notizia è stata comprata dal magnate per convincere i business men stranieri ad investire su questi organismi. Anche se sono d'accordo che l'ucraina si dovrebbe riformare e parecchio Now that Ukraine's electoral battles are over and the conflict in the country's eastern regions is frozen, one of three scenarios could unfold: Quick and painful economic and regulatory surgery, a slide into Russia's suffocating embrace, or chaos, as gangs of former volunteer fighters from the eastern war go on the rampage. The window of opportunity for Ukraine to seize the first -- and best -- option is rapidly closing, but politicians squabbling over portfolios and bureaucrats who perpetuate the old corrupt system seem oblivious to the urgency. To a handful of outsiders who are pushing for rapid change, failure to act would be a tragedy. One of these outsiders is Kakha Bendukidze, a former business tycoon who engineered Georgia's successful economic deregulation under then-President Mikheil Saakashvili. It's a frustrating experience, he said in an interview in the lobby of a Kiev hotel.

FRANCE 24 - Watch our TV channel Welcome back, {* welcomeName *} {* loginWidget *} Welcome back! {* #signInForm *} {* signInEmailAddress *} {* currentPassword *} {* /signInForm *} Your account has been deactivated. The Difference Between Friends, Fans and Followers With every day that passes, brand managers are learning the value of presence in social networks. The extent to which new media permeates a company’s fabric depends on where in the world the company is based, as well as the prevailing culture of its organization. What’s clear however, is that brands are paying attention. Social media and our understanding of its promise are raw. I’ve always believed that media and ensuing behavior are evolving faster than our ability to master it. As such, it relegates us to an important, not menial role of student versus expert.

Weird News: 5 Ridiculous Arguments That Led To Police Arrests Arguments that involve the police aren't just for Florida. Ever get into a raging "discussion" with your wife, boyfriend or It's Complicated about management of the TiVo? The fracas may've lasted days but it wasn't really ever about about the allocation of television recording, was it? Yeah, well you're a totally reasonable person and you solved the problem without the need for Johnny Law to insert his crew cut and hippie stompers into the equation. And along the way you may've learned a lesson or two about communication and expectations.

I Do Not Want Mercy, I Want You To Join Me Tim DeChristopher, who was sentenced Tuesday to two years in federal prison and a $10,000 fine for 'disrupting' a Bureau of Land Management auction in 2008, had an opportunity to address the court and the judge immediately before his sentence was announced. This is his statement: "… those who write the rules are those who profit from the status quo.

Judicial Errors and Crime Deterrence: Theory and Experimental Evidence Abstract The standard economic theory of crime deterrence predicts that the conviction of an innocent (type-I error) is as detrimental to deterrence as the acquittal of a guilty individual (type-II error). In this paper, we qualify this result theoretically, showing that in the presence of risk aversion, loss-aversion, or differential sensitivity to procedural fairness, type-I errors can have a larger effect on deterrence than type-II errors. We test these predictions with an experiment where participants make a decision on whether to steal from other individuals, being subject to different probabilities of judicial errors. The results indicate that both types of judicial errors have a large and significant impact on deterrence, but these effects are not symmetric. An increase in the probability of type-I errors has a larger negative impact on deterrence than an equivalent increase in the probability of type-II errors.