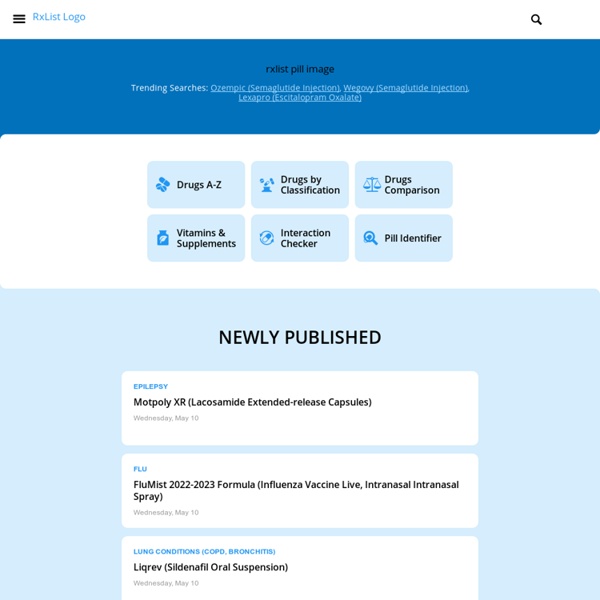 Pill Identifier: Why and How to Identify Your Medication Medical Author: Omudhome Ogbru, PharmD Medical and Pharmacy Editor:Jay W. Marks, MD Pharmacists and other health care professionals are diligent about ensuring that patients receive the correct medication. However, they are human, and once in a while they make mistakes. The doctor may prescribe the wrong dose or the wrong medication. What should you, the prudent consumer do to protect yourself? For pill identifiers to be valuable, you have to know the medication and strength you should have received. Find a picture of your pill using the RxList Pill Identifier Tool. Below is a list of commonly searched medications, click on a link to read patient information on this drug, see pictures of the different pills prescribed, understand the potential side effects, how to take the medication, and what to do if you miss a dose. REFERENCE: U.S.

World Population Clock: 7 Billion People (2015) - Worldometers World Population: Past, Present, and Future (move and expand the bar at the bottom of the chart to navigate through time) The chart above illustrates how world population has changed throughout history. View the full tabulated data. A cure for Cancer Since I was a child I never really liked hospitals, they always seemed to be blood sucking people for money sort of speak. I just hated getting vaccinations all the time, which I felt wasn't really necessary to get injected into our blood streams year after year. I always felt like something was wrong with certain things in life as a whole when I was young, and especially with the foods my mom use to purchase from the store. After eating I always seemed to get tired, and had less energy after finishing my meals.

DailyMed DailyMed provides high quality information about marketed drugs. Drug labeling on this Web site is the most recent submitted to the Food and Drug Administration (FDA) and currently in use; it may include, for example, strengthened warnings undergoing FDA review or minor editorial changes. These labels have been reformatted to make them easier to read. About DailyMed DailyMed provides high quality information about marketed drugs. Study: Some supplements may pose risks for older women Older women are reportedly at an increased risk of death when consumng vitamins or other dietary supplements. The use of dietary supplements has exploded in the United States in recent decadesFolic acid, vitamin B6, magnesium, zinc and copper pose an increased risk Iron was most strongly linked to an increased risk of earlier death -- calcium was the leastIncreases in death risk were extremely small and may not be clinically meaningful (Health.com) -- Older women have a slightly increased risk of dying at an earlier age if they take multivitamins or certain other dietary supplements, according to a new study published today in the Archives of Internal Medicine.

Drugs & Medications IMPORTANT: About This Section and Other User-Generated Content on WebMD The opinions expressed in WebMD User-generated content areas like communities, reviews, ratings, or blogs are solely those of the User, who may or may not have medical or scientific training. These opinions do not represent the opinions of WebMD. Healthy News and Information by NICK MEYER The immune system is something that is highly misunderstood not just by everyday people but also by the many conventional doctors who we depend on for health advice. Most people resort to things like synthetic vitamins and medicines (ignoring better natural alternatives) to deal with colds and improve immunity, but the cycle of sickness always seems to continue. For people with compromised immune systems, there are many natural options, and now researchers have discovered what could well be one of the best ways to reset and recharge your immune system; one that happens to be free and is believed to work even in the elderly as well.

Researching Medical Literature on the Internet Gloria Miccioli has been a law librarian for 23 years. Her specialty is research. She has worked as Government Documents/Reference Librarian at the Jacob Burns Law Library of the George Washington University Law School; as Senior Research Librarian for Williams & Connolly; and is currently International Librarian for Jones DayD.C. office, where she provides expert research services for the firm's overseas offices. The proliferation of medical websites is good news for the researcher with a small to non-existent medical collection. Legal researchers often have to consult medical sources, so it is fortunate that the Internet provides free access to a great deal of the medical literature, either in full text or citation/abstract format, and that it offers search capabilities good enough to fulfill most information needs.

Straight Talk about Vaccination Last year 10 children died in California in the worst whooping cough outbreak to sweep the state since 1947. In the first six months of 2011, the Centers for Disease Control and Prevention recorded 10 measles outbreaks—the largest of which (21 cases) occurred in a Minnesota county, where many children were unvaccinated because of parental concerns about the safety of the standard MMR vaccine against measles, mumps and rubella. At least seven infants in the county who were too young to receive the MMR vaccine were infected. These troubling statistics show that the failure to vaccinate children endangers both the health of children themselves as well as others who would not be exposed to preventable illness if the community as a whole were better protected. Equally troubling, the number of deliberately unvaccinated children has grown large enough that it may be fueling more severe outbreaks.