The climate crisis explained in 10 charts. The problem – rising carbon dioxide in the atmosphere The level of CO2 has been rising since the industrial revolution and is now at its highest for about 4 million years. 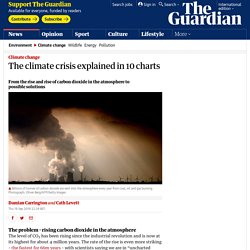 The rate of the rise is even more striking – the fastest for 66m years – with scientists saying we are in “uncharted territory”. The causes – fossil fuel burning Billions of tonnes of CO2 are sent into the atmosphere every year from coal, oil and gas burning. There is no sign of these emissions starting to fall rapidly, as is needed. The causes – forest destruction The felling of forests for timber, cattle, soy and palm oil is a big contributor to carbon emissions. The consequences – global temperature rise The planet’s average temperature started to climb steadily two centuries ago, but has rocketed since the second world war as consumption and population has risen. Climate change: 12 years to save the planet? Make that 18 months. Image copyright clintspencer Do you remember the good old days when we had "12 years to save the planet"? 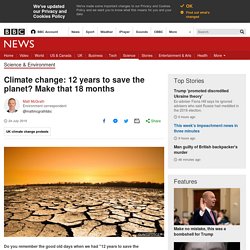 Now it seems, there's a growing consensus that the next 18 months will be critical in dealing with the global heating crisis, among other environmental challenges. Last year, the Intergovernmental Panel on Climate Change (IPCC) reported that to keep the rise in global temperatures below 1.5C this century, emissions of carbon dioxide would have to be cut by 45% by 2030. The Manifesto - Dark Mountain. This is where it all began. 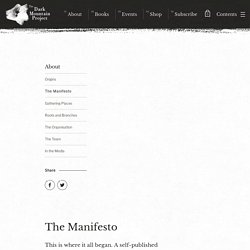 A self-published pamphlet, born out of two years of conversations, crowdfunded over the internet, launched at a small riverside gathering outside Oxford in summer 2009. Written by Paul Kingsnorth and Dougald Hine, it marked a first attempt to put into words the ideas and feelings which led to Dark Mountain. Think of it as a flag raised so that we can find one another. A point of departure, rather than a party line. 'Climate Despair' Is Making People Give Up on Life. As climate change worsens, some people might decide to DIY a solution. When Climate Change Starts Wars - Nautilus - Pocket. Climate change: Bill McKibben’s advice for activists. Some good news for far-future sea level rise. Glaciers are moody things with myriad personalities. 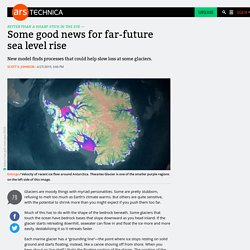 Some are pretty stubborn, refusing to melt too much as Earth’s climate warms. How Much Ice Has Greenland Lost to Climate Change? “The glaciers are still being pushed out of balance,” Eric Rignot, a senior scientist at NASA and an author of the paper, told me. 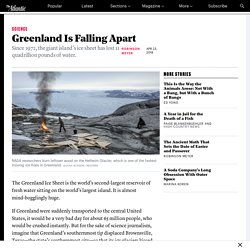 “Even though the ice sheet has [sometimes] been extremely cold and had low surface melt in the last year, the glaciers are still speeding up, and the ice sheet is still losing mass.” The paper casts the transformation of the Greenland Ice Sheet as one of the profound geological shifts of our time. Scientists measure the mass of ice sheets in “gigatons”—each unit equal to 1 billion metric tons, or roughly the same amount of water that New York or Los Angeles uses in a year. To fear or not to fear? A conversation between David Wallace-Wells and Eric Holthaus. In just the past year, the public conversation on climate change has turned dire. 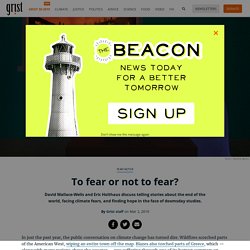 Wildfires scorched parts of the American West, wiping an entire town off the map. Use these tools to help visualize the horror of rising sea levels. The Tiny Swiss Company That Thinks It Can Help Stop Climate Change. Later, Wurzbacher told me he wants to offer a “one click” consumer service, perhaps in a year or two, which would expand what they’re doing in Iceland to individual customers and businesses. A Climeworks app could be installed on my smartphone, he explained.

It could then be activated by my handset’s location services. “You fly over here to Europe,” he explained, “and the app tells you that you have just burned 1.7 tons of CO₂. Do you want to remove that? Well, Climeworks can remove it for you. Paradoxical though it may seem, it’s probable that synthetic fuels offer a more practical path to creating a viable business for direct air capture. Steve Oldham, Carbon Engineering’s chief executive, added that direct-air-capture synthetics have an advantage over traditional fossil fuels: They won’t have to spend a dime on exploration. Climeworks perceives a large market for fuels, too. In an expanding market, synthetic fuels could have curious effects. Are you a robot? When the ice melts: the catastrophe of vanishing glaciers. Tackle climate or face financial crash, say world's biggest investors.

Global investors managing $32tn issued a stark warning to governments at the UN climate summit on Monday, demanding urgent cuts in carbon emissions and the phasing out of all coal burning. 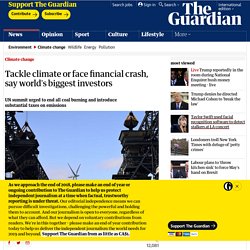 - The Washington Post. We Have a Decade to Prevent a Total Climate Disaster. We broke down what climate change will do, region by region. Climate Change Insurance: Buy Land Somewhere Else. Your Children’s Yellowstone Will Be Radically Different. YELLOWSTONE NATIONAL PARK — On a recent fall afternoon in the Lamar Valley, visitors watched a wolf pack lope along a thinly forested riverbank, ten or so black and gray figures shadowy against the snow. 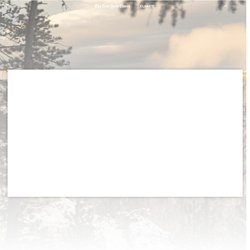 A little farther along the road, a herd of bison swung their great heads as they rooted for food in the sagebrush steppe, their deep rumbles clear in the quiet, cold air. In the United States, Yellowstone National Park is the only place bison and wolves can be seen in great numbers. Climate change will make America much warmer by 2050. See how these US cities will change. Our world is getting warmer. 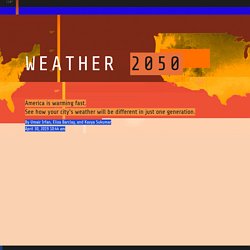 This we know. Just look at Los Angeles, which experienced all-time record heat in July, topping out at 118 degrees Fahrenheit. Dozens of other heat records across the United States were smashed last summer alone. Climate change: Oceans 'soaking up more heat than estimated' Image copyright Getty Images The world has seriously underestimated the amount of heat soaked up by our oceans over the past 25 years, researchers say. 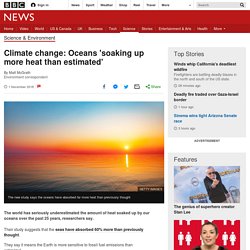 Their study suggests that the seas have absorbed 60% more than previously thought. They say it means the Earth is more sensitive to fossil fuel emissions than estimated. This could make it much more difficult to keep global warming within safe levels this century. - The Washington Post. Redirect?&url= Remembering the past won’t save us from the future. “Those who cannot remember the past are condemned to repeat it.” And those who teach the past are doomed to hear these words over and over, an adage that must be tolerated as a justification for their line of work. William Vollmann’s Brutal Book About Climate Change. It is also an almanac of global energy use. How the Weather Channel Made That Insane Hurricane Florence Storm Surge Animation. Don't Be Fooled: Weather Is Not Climate. I’m going to say something controversial.