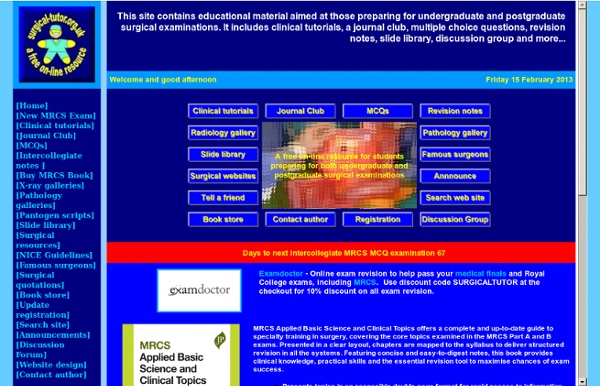 Blog » Blog Archive » 23 Surprisingly Effective Treatments for Depression (One Year Later) For the live-updated, interactive version of this infographic, click here. A year ago, we published one of our most popular findings – 6 surprisingly effective treatments for depression. I went ahead and repeated the analysis today, and now we have 23 treatments in the “surprisingly effective” category for depression. This chart is based on 4,956 people with depression who participated in CureTogether surveys, compared to 944 people last year. stencil with freezer paper (harry potter tee) Yes, I am a nerd. I came up with a brilliant idea for a Harry Potter t-shirt and I couldn't resist. "Expecto Patronum!" However, you can make whatever kind of design you want with a freezer paper stencil.

Why you should never go to the hospital in July Anthony Youn, M.D., is a plastic surgeon in Metro Detroit. He is the author of “In Stitches,” a humorous memoir about growing up Asian American and becoming a doctor. Do not get sick in July. Why? You might die. The 100 Most Important Things To Know About Your Character (revised) Quote from original Author(Beth):This list came about when, one day while struggling to develop a character for an upcoming Hunter game, my lovely roommate Nikki looked at me and said something like, "Wouldn't it be cool to have a list of questions you could go through and answer while you were making characters, so you'd make sure to consider all sorts of different elements in their personality?" I agreed, and that very evening we sat down over hot chocolate and ramen noodles to whip up a list of 100 appearance-, history-, and personality-related questions (which seemed like a nice even number) to answer as a relatively easy yet still in-depth character building exercise. Later on, we went through the list again, took out the questions that sucked (because there were a lot of them) and replaced them with better ones. What you see before you is the result of that second revision. Just don't email us specifically to tell us how much we suck. That only results in cranky gamerchicks.

Kubrick's bathrooms Stanley Kubrick: An Indoor-Plumbing Luddite by Stephanie Morgan Men like Marshall McLuhan pronounce the downfall of civilization in clear terms – in his case, the advent of written language split apart our tribal society forever destroying our close-knit society that was once built upon the need to remain close in order to receive information. Three years after his death, I realize that an artist like Stanley Kubrick is subtler when describing the downfall of civilization. Best known for films like “2001: A Spacey Odyssey,” “Full Metal Jacket,” and “Eyes Wide Shut,” Kubrick was once one of the famed five directors with “final cut” status. This meant that Kubrick controlled all aspects of the final product – no studio could take a film and recut it to their liking. Small Footprint, Big Yield: Create an Easy Micro Organic Urban Garden Today! April 28, 2009 by Robin Plaskoff Horton There are two things urban gardeners are short on: space and time. The Urban Garden, brainchild of Bill Arquitt, resolves both of these issues, making it efficient and simple to plant a vegetable garden with up to 55 plants in a 3-foot deep by 4-foot wide footprint.