Peds. Antibiotic Prescribing for Nonbacterial AURIs in Elderly Persons. Patients with colds get inappropriate antibiotics in nearly half of visits to doctors, study suggests - Health. Nearly half of Canadian seniors who go to a family doctor about a cold or other non-bacterial respiratory infection leave with a prescription for an unnecessary antibiotic, say researchers who aim to prevent the public health harm caused by such overuse. 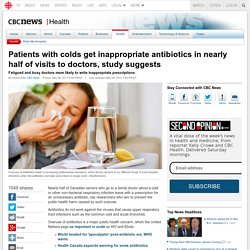 Antibiotics do not work against the viruses that cause upper respiratory tract infections such as the common cold and acute bronchitis. Antibiotic use for emergency department patients with upper respiratory infections: prescribing practices, patient expectations, and patient satisf... Impact of reducing antibiotic prescribing for acute bronchitis on patient satisfaction. Why the advice to take all your antibiotics may be wrong.

Ou’ve heard it many times before from your doctor: If you’re taking antibiotics, don’t stop taking them until the pill vial is empty, even if you feel better. 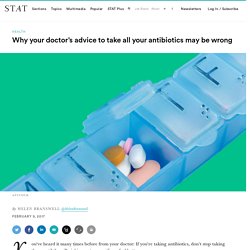 The rationale behind this commandment has always been that stopping treatment too soon would fuel the development of antibiotic resistance — the ability of bugs to evade these drugs. Information campaigns aimed at getting the public to take antibiotics properly have been driving home this message for decades. But the warning, a growing number of experts say, is misguided and may actually be exacerbating antibiotic resistance. article continues after advertisement The reasoning is simple: Exposure to antibiotics is what drives bacteria to develop resistance. The traditional reasoning from doctors “never made any sense. The question of whether this advice is still appropriate will be raised at a World Health Organization meeting next month in Geneva. Antibiotic overprescribing a growing problem. Both studies rely on data from 184 032 ambulatory care visits from the National Ambulatory Medical Care Survey, which samples office-based physicians, and the National Hospital Ambulatory Medical Care Survey, which samples hospital outpatient and emergency departments. 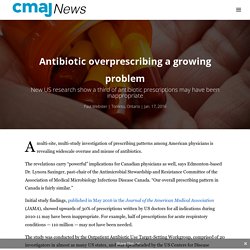 “We knew that misuse was occurring based on local studies,” says Dr. David Hyun, a coauthor of both studies. “But at the national level what surprised us was the vast scale of unnecessary prescriptions, and inappropriate prescription.” These two studies have created “an initial baseline” for further investigations, says Hyun. An American woman just died from a superbug resistant to 26 different antibiotics - Home. Friday January 20, 2017 A 70-year-old Nevada woman has died after contracting a superbug that could not be treated with any known antibiotic. 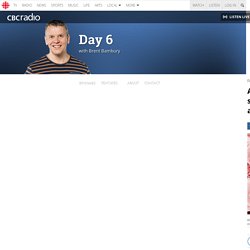 As microbiologist Dr. Lance Price tells Day 6 host Brent Bambury, cases like this will soon be all too common. "This is a huge problem. In the past, we'd see infections that were treatable with one or two or, maybe if we're lucky, three drugs. Superbug resistant to all antibiotics killed Nevada woman, doctors say - Health. A Nevada woman in her 70s who'd recently returned from India died in September from a "superbug" infection that resisted all antibiotics, according to a report released Friday. 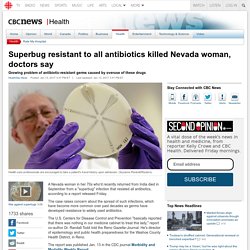 The case raises concern about the spread of such infections, which have become more common over past decades as germs have developed resistance to widely used antibiotics. The U.S. Centers for Disease Control and Prevention "basically reported that there was nothing in our medicine cabinet to treat this lady," report co-author Dr. Randall Todd told the Reno Gazette-Journal. He's director of epidemiology and public health preparedness for the Washoe County Health District, in Reno. The report was published Jan. 13 in the CDC journal Morbidity and Mortality Weekly Report. As reported by Todd and his colleagues, the woman fractured her right leg while in India and underwent multiple hospitalizations in that country over two years.

Duration of Antibiotic Treatment in Community-Acquired Pneumonia: A Multicenter Randomized Clinical Trial. Variability in Antibiotic Use Across Nursing Homes and the Risk of Antibiotic-Related Adverse Outcomes for Individual Residents. Study supports reducing antibiotics for sore throat, ear infections - Health. When family doctors prescribe fewer antibiotics for coughs, colds, sore throats and ear infections, it isn't linked to an increase in the most serious bacterial complications, such as bacterial meningitis, U.K. researchers have found. 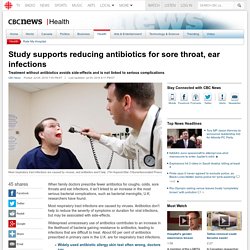 Most respiratory tract infections are caused by viruses. Antibiotics don't help to reduce the severity of symptoms or duration for viral infections, but may be associated with side-effects. Widespread unnecessary use of antibiotics contributes to an increase in the likelihood of bacteria gaining resistance to antibiotics, leading to infections that are difficult to treat. Prophylactic antibiotics after acute stroke for reducing pneumonia in patients with dysphagia (STROKE-INF): a prospective, cluster-randomised, open... 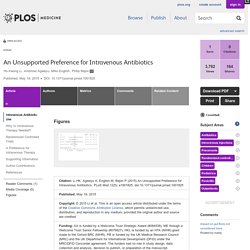 PLoS Med 12(5): e1001825. doi:10.1371/journal.pmed.1001825 Published: May 19, 2015 Copyright: © 2015 Li et al. This is an open access article distributed under the terms of the Creative Commons Attribution License, which permits unrestricted use, distribution, and reproduction in any medium, provided the original author and source are credited Funding: AA is funded by a Wellcome Trust Strategic Award (#084538), ME through a Wellcome Trust Senior Fellowship (#076827). Competing interests: The authors have declared that no competing interests exist. Stop antibiotics: experts. AFTER years of urging patients to finish their full course of antibiotics, GPs are now being encouraged to tell most patients to stop treatment when they feel better. 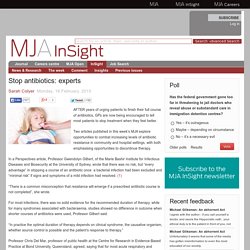 Two articles published in this week’s MJA explore opportunities to combat increasing levels of antibiotic resistance in community and hospital settings, with both emphasising opportunities to discontinue therapy. In a Perspectives article, Professor Gwendolyn Gilbert, of the Marie Bashir Institute for Infectious Diseases and Biosecurity at the University of Sydney, wrote that there was no risk, but “every advantage” in stopping a course of an antibiotic once a bacterial infection had been excluded and “minimal risk” if signs and symptoms of a mild infection had resolved. (1) Maryn McKenna: What do we do when antibiotics don’t work any more? Our dangerous overuse of antibiotics. I am privileged to help patients deal with a variety of common disorders such as ear infections, pharyngitis and sinus inflammation. 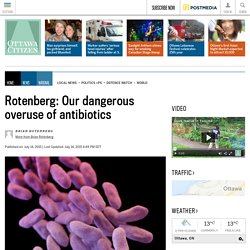 People suffer a great deal from these problems, especially when they are in the acute phase. I offer pain medication, ear or nasal rinses, gargles or decongestants, all of which work reasonably well. The more time spent on listening, the less time spent on prescribing antibiotics in general practice. Interventions to facilitate shared decision making to address antibiotic use for acute respiratory infections in primary care. Delayed Antibiotic Prescribing Strategies—Time to Implement?

Intervention to improve the quality of antimicrobial prescribing for urinary tract infection: a cluster randomized trial.