‘Superbugs’ Kill India’s Babies and Pose an Overseas Threat. Photo AMRAVATI, India — A deadly epidemic that could have global implications is quietly sweeping , and among its many victims are tens of thousands of newborns dying because once-miraculous cures no longer work. 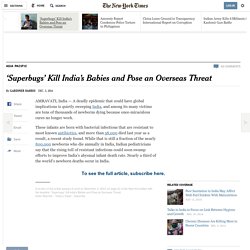 These infants are born with bacterial infections that are resistant to most known , and more than 58,000 died last year as a result, a recent study found. Brazil Olympics: Super-bacteria found in Rio sea waters. 15 December 2014Last updated at 21:21 ET. 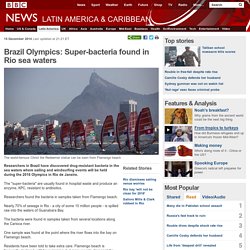 Imagining the Post-Antibiotics Future. Medical procedures may involve a high risk of infections, but our everyday lives are pretty risky too. 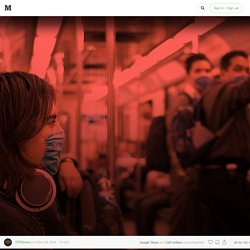 One of the first people to receive penicillin experimentally was a British policeman, Albert Alexander. He was so riddled with infection that his scalp oozed pus and one eye had to be removed. The source of his illness: scratching his face on a rosebush. (There was so little penicillin available that, though Alexander rallied at first, the drug ran out, and he died.)

Before antibiotics, five women died out of every 1,000 who gave birth. “Right now, if you want to be a sharp-looking hipster and get a tattoo, you’re not putting your life on the line,” says the CDC’s Bell. Bell’s prediction is a hypothesis for now—but infections that resist even powerful antibiotics have already entered everyday life. David Cameron calls for global response to superbugs. Antibiotic-resistant superbugs threaten to plunge the world back to the "dark ages" of medicine, according to David Cameron, who pledged that the UK will lead a global effort to develop new drugs. 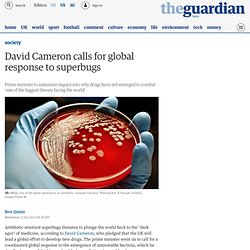 The prime minister went on to call for a coordinated global response to the emergence of untreatable bacteria, which he decribed as one of the biggest health threats facing the world today. "This is not some distant threat, but something happening right now," Cameron told the Times. "If we fail to act, we are looking at an almost unthinkable scenario where antibiotics no longer work and we are cast back into the dark ages of medicine, where treatable infections and injuries will kill once again. That simply cannot be allowed to happen and I want to see a stronger, more coherent global response.

" The prime minister is to announce an independent review led by Jim O'Neill, the former chief economist at Goldman Sachs, to identify why new drugs have failed to emerge on the international market. UEA researchers discover Achilles’ heel in antibiotic-resistant bacteria. Scientists at the University of East Anglia have made a breakthrough in the race to solve antibiotic resistance. 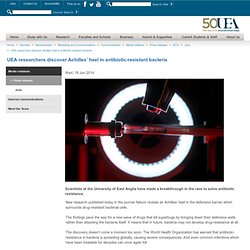 New research published today in the journal Nature reveals an Achilles’ heel in the defensive barrier which surrounds drug-resistant bacterial cells. The findings pave the way for a new wave of drugs that kill superbugs by bringing down their defensive walls rather than attacking the bacteria itself. It means that in future, bacteria may not develop drug-resistance at all. The discovery doesn’t come a moment too soon. The World Health Organization has warned that antibiotic-resistance in bacteria is spreading globally, causing severe consequences.

Drug-Resistant Bacteria Are Big Fans of E-Cigs. You, as a healthy or at least relatively healthy human (the rest of us will have to imagine), are not free of harmful pathogens. 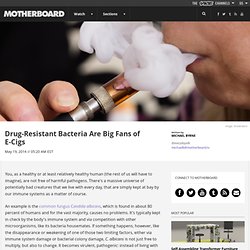 There's a massive universe of potentially bad creatures that we live with every day, that are simply kept at bay by our immune systems as a matter of course. An example is the common fungus Candida albicans, which is found in about 80 percent of humans and for the vast majority, causes no problems. It's typically kept in check by the body's immune system and via competition with other microorganisms, like its bacteria housemates.

If something happens, however, like the disappearance or weakening of one of those two limiting factors, either via immune system damage or bacterial colony damage, C. albicans is not just free to multiply, but also to change. It becomes virulent, pathogenic: instead of living with your body, it tries to take it over. Antibiotic-Resistant Bacteria Are Now In Every Part of the World. WHO declares antibiotic-resistant bacteria ‘a major global threat’ Why the post-antibiotic world is the real-life version of the zombie apocalypse. When We Lose Antibiotics, Here’s Everything Else We’ll Lose Too. A colony of an Actinomycetes bacteria taken at 140x magnification.Image courtesy Biology101.org/Flickr. 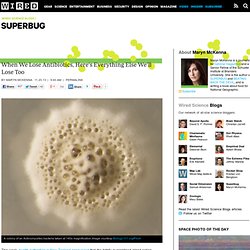 Get ready for a future where antibiotics no longer work. The world could soon be headed for a "post-antibiotic era" — in which many of our best drugs don't work and common infections can kill. 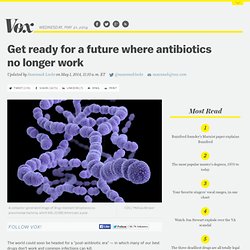 That was the terrifying conclusion of the World Health Organization's first report on the growth in drug-resistant microbes around the world. Worst of all, the report notes, we don't even have the proper monitoring around the globe to fully assess the situation. the microbes are coming, and we don't have the drugs to treat them "Resistance to common bacteria has reached alarming levels in many parts of the world," the report said, "indicating that many of the available treatment options for common infections in some settings are becoming ineffective. " So what is going on here? Imagining the Post-Antibiotics Future — Editor’s Picks. Medical procedures may involve a high risk of infections, but our everyday lives are pretty risky too. 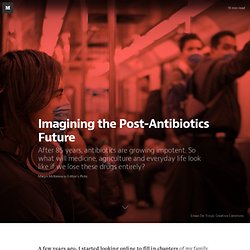 One of the first people to receive penicillin experimentally was a British policeman, Albert Alexander. He was so riddled with infection that his scalp oozed pus and one eye had to be removed. The source of his illness: scratching his face on a rosebush. (There was so little penicillin available that, though Alexander rallied at first, the drug ran out, and he died.) Before antibiotics, five women died out of every 1,000 who gave birth.

“Right now, if you want to be a sharp-looking hipster and get a tattoo, you’re not putting your life on the line,” says the CDC’s Bell. Bell’s prediction is a hypothesis for now—but infections that resist even powerful antibiotics have already entered everyday life. Rise of the Superbugs. The Future of Antibiotics and Resistance. In its recent annual report on global risks, the World Economic Forum (WEF) concluded that “arguably the greatest risk . . . to human health comes in the form of antibiotic-resistant bacteria. 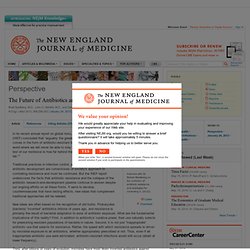 We live in a bacterial world where we will never be able to stay ahead of the mutation curve. A test of our resilience is how far behind the curve we allow ourselves to fall.”1 Traditional practices in infection control, antibiotic stewardship, and new antibiotic development are cornerstones of society's approach to combating resistance and must be continued. How do bacteria become resistant to antibiotics?" Antibiotics are compounds that either: kill bacteria directly (bacteriocidal)hamper their ability to grow and reproduce (bacteriostatic) When you are fighting off a bacterial infection, your immune system can be overwhelmed by the invading bugs.

Antibiotics are thrown into the fray to mount a defense against the invaders until your immune system can recover and finish off the remaining bacteria. How do antibiotics stave off bacterial growth? Antibiotics stop or interfere with a number of everyday cellular processes that bacteria rely on for growth and survival, such as: Beijing halts sales of tainted bottled water.

Authorities in Beijing have halted the sale of 31 brands of bottled water after they failed safety tests, the government reported, in the latest such scare to hit China. Random market inspections found bacteria colonies in the water, the Beijing Administration for Industry and Commerce said on its website, citing a joint study with the capital's product quality bureau. "In order to prevent these substandard products from entering the distribution chain, the product quality bureau has taken measures to halt sales," the administration said in a statement Wednesday. Tests on one brand of bottled water -- Yiqun -- found that bacteria levels were 9,000 times above safety standards, while those in Tianxing Special Water were 560 times higher, a report in the state-run Beijing Times said. When antibiotics no longer work. There may be nothing more viscerally unsettling than the idea that our food is tainted and could make us seriously ill.

Those anxieties were stoked this morning when Cargill, the third-largest turkey producer in the country, announced the recall of 36 million pounds of poultry for fear of salmonella contamination. The scare was precipitated by an outbreak in California — which left at least one person dead and more than 70 sick — which was traced back to Cargill’s products. Anti-bacterial soap 'helps superbugs' They found that because of the way triclosan, the main active ingredient in many antibacterial soaps, reacts in the cells, it may cause some bacteria to become resistant to commonly used antibiotics such as amoxicillin. Resistance to common anti-biotics is the key feature of superbugs, such as MRSA, which kill around 5,000 people in hospital every year.

The team found that some strains of E. coli developed drug resistance when exposed to triclosan soap.