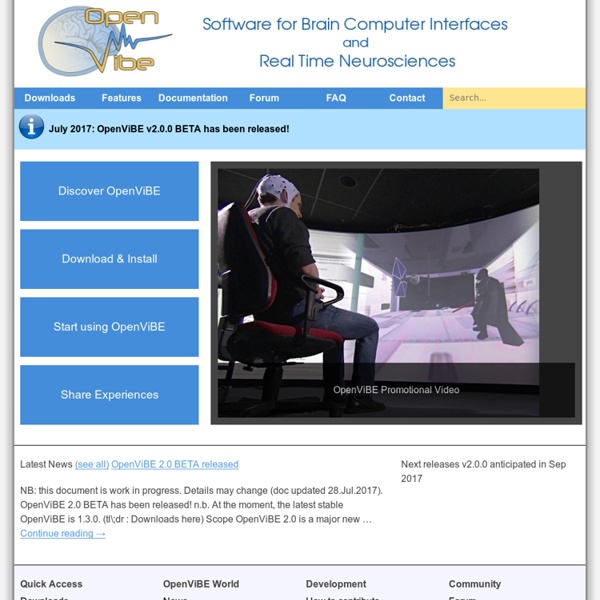 Your Mind Creates: Binaural Beats: An Infographic Guide to Brainwave Entrainment Imagine if you could get into a deep state of focused consciousness any time you want.What if I told you that this is possible? Here's your answer: get yourself some stereo headphones and listen to Binaural Beats. Binaural beats and brainwave entrainment are amazingly powerful tools for altering your state of mind.This is seriously useful whether you want to reach a deep meditative state of mind, achieve peak concentration whilst studying or immerse yourself in vivid creative visualization. Binaural beats can also help you raise your vibrational frequency. So, what are binaural beats? Binaural beats are one of the more popular types of brainwave entrainment.

Direct Brain Interface Project - University of Michigan The University of Michigan Direct Brain Interface (UM-DBI) project is unique among brain-computer interface (BCI) research groups in its combination of many years of BCI research and close clinical ties to assistive technology service delivery both through investigator background and sharing offices with the UM Rehabilitation Engineering Program’s (UMREP) clinical service. The UM-DBI project was co-founded by Dr. Simon Levine and Dr. The Lucid Dreaming Podcast - LucidSage.com Episode 29 – Jayne Gackenbach In this episode I interview Jayne Gackenbach who is a researcher and author of several books about lucid dreams and videos games. We discuss the intersection of videos games, dreams, nightmares, lucidity and how they are connected. Show notes: Episode 28 – Craig Weiss – Aladdin Dreamer In this episode I discuss the recent lucid dreaming device showing up on crowdfunding campaigns plus an interview with Craig Weiss, the Founder of CEO of Aladdin Dreamer, a company making a brain stimulation lucid dreaming device.

Welcome to the OpenEEG project About the project Many people are interested in what is called neurofeedback or EEG biofeedback training, a generic mental training method which makes the trainee consciously aware of the general activity in the brain. This method shows great potential for improving many mental capabilities and exploring consciousness. Other people want to do experiments with brain-computer interfaces or just want to have a look at their brain at work. Unfortunately, commercial EEG devices are generally too expensive to become a hobbyist tool or toy. So can zapping the brain really induce lucid dreams? TL;DR answer: it’s beginning to look pretty likely. In case you missed it, in 2014 researchers in Germany confirmed that zapping the brain of subjects can routinely induce lucid dreams. (By zapping, I mean applying a low voltage current stimulation to the scalp).

Brain–computer interface Research on BCIs began in the 1970s at the University of California, Los Angeles (UCLA) under a grant from the National Science Foundation, followed by a contract from DARPA.[2][3] The papers published after this research also mark the first appearance of the expression brain–computer interface in scientific literature. Due to the cortical plasticity of the brain, signals from implanted prostheses can, after adaptation, be handled by the brain like natural sensor or effector channels.[4] Following years of animal experimentation, the first neuroprosthetic devices implanted in humans appeared in the mid-1990s. Recently, studies in Human-computer interaction through the application of machine learning with statistical temporal features extracted from the frontal lobe, EEG brainwave data has shown high levels of success in classifying mental states (Relaxed, Neutral, Concentrating),[5] mental emotional states (Negative, Neutral, Positive)[6] and thalamocortical dysrhythmia.[7]

Dormio: Interfacing with Dreams to Augment Human Creativity Inspiration Sleep is a forgotten country of the mind. A vast majority of our technologies are built for our waking state, even though a third of our lives are spent asleep. Current technological interfaces miss an opportunity to access the unique, imaginative, elastic cognition ongoing during dreams and semi-lucid states.

Tomas Vega Here we go Motivation At the beginning of the semester I started playing with a Peltier thermoelectric device. Ditch the Buzzer: 4 New Futuristic Alarm Clocks for Optimal Sleep This article is part 2 of my sleep tech round up for 2016. This new burst of alarm clocks on the scene is important– because let’s be honest, our use of electronics (tablets, smartphones, TVs etc) dominates our bedrooms and pollutes our sleep. I struggle with this too. Sometimes I win, and admittedly, sometimes Netflix wins.