This Bandage Glows Green When You're Infected. CDC Alert: Drug-Resistant Foodborne Illness Spreads in US – Phenomena: Germination. Figuring out how to talk about antibiotic resistance—which you’ll be seeing discussed here a lot, since it’s the topic of my last book, an important part of my next book, and a central topic in my past blogging—is a difficult balancing act. 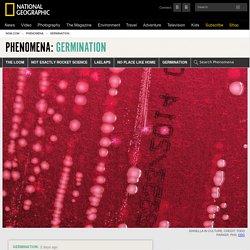 On the one hand, antibiotic resistance is a true global threat: 23,000 people die in the United States each year from resistant infections, according to the CDC, and a UK project estimates that the toll in 2050 will be 10 million deaths worldwide. On the other hand, if you’re a casual reader, alerts on antibiotic resistance probably all blur together. How can you know when a warning to be wary of this infection is more or less worth listening to than a caution that we’re losing that drug? It’s hard. I’ll try to provide guidance. The epidemic curve of Cipro-resistant Shigella since May 2014. Cockroaches, Alligators & Other Weird Sources of New Drugs. Phasing Out Certain Antibiotic Use in Farm Animals. Get Consumer Updates by E-mail Consumer Updates RSS Feed Print & Share (PDF 606 K) En Español On this page: The Food and Drug Administration (FDA) is implementing a voluntary plan with industry to phase out the use of certain antibiotics for enhanced food production. 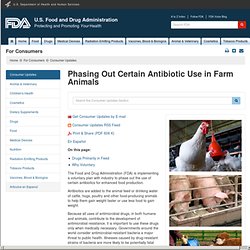 Antibiotics are added to the animal feed or drinking water of cattle, hogs, poultry and other food-producing animals to help them gain weight faster or use less food to gain weight. Because all uses of antimicrobial drugs, in both humans and animals, contribute to the development of antimicrobial resistance, it is important to use these drugs only when medically necessary. FDA is working to address the use of “medically important” antibiotics in food-producing animals for production uses, such as to enhance growth or improve feed efficiency.

Back to top Drugs Primarily in Feed Flynn explains that all the drugs affected by this plan are antibacterial products. Bacteria evolve to survive threats to their existence. Why Voluntary? Drug-resistant bacteria: 'We're facing a catastrophe' For the first time, the US government is estimating how many people die from drug-resistant bacteria each year - more than 23,000, or about as many as those killed annually by flu. 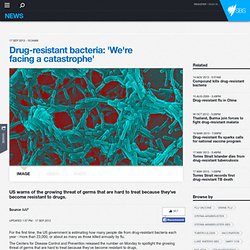 The Centers for Disease Control and Prevention released the number on Monday to spotlight the growing threat of germs that are hard to treat because they've become resistant to drugs. Finally estimating the problem sends "a very powerful message," said Dr. Helen Boucher, a Tufts University expert and spokeswoman for the Infectious Diseases Society of America. "We're facing a catastrophe. " Antibiotics like penicillin and streptomycin first became widely available in the 1940s, are considered one of the greatest advances in the history of medicine, and have saved countless lives. But as decades passed, some antibiotics stopped working against the bugs they previously vanquished. Antimicrobial resistance: global report on surveillance 2014. The End of Antibiotics? In recent years, the public health community has sounded increasingly louder alarms about the rise of antibiotic-resistant infections, or superbugs. 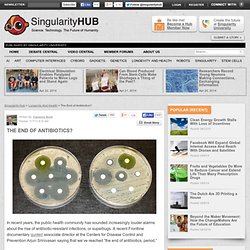 A recent Frontline documentary quoted associate director at the Centers for Disease Control and Prevention Arjun Srinivasan saying that we’ve reached “the end of antibiotics, period.” It made for an attention-grabbing headline, but what Srinivasan meant was we’re at the beginning of the end of antibiotics: people are dying from bacterial infections, and if we don’t make changes, we could see life-threatening infections become the norm instead of the exception. “We’re not at the end of antibiotics for all organisms or all conditions, but there are organisms that people get infections with for which we truly have no antibiotics that are effective, and people can die from those infections,” Lisa Winston, an infectious diseases specialist at the University of California in San Francisco, told Singularity Hub. 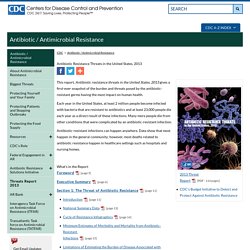 Each year in the United States, at least 2 million people become infected with bacteria that are resistant to antibiotics and at least 23,000 people die each year as a direct result of these infections. Antibiotic-resistant infections can happen anywhere. What's in the Report.