The Opportunity for Real-World Data and Evidence in Ophthalmology – Health Advances Blog. By Patrick Symmonds, Engagement Manager Attendees at this year’s American Glaucoma Society meeting seemed to have one question on their minds: “Which is the best MIGS device to use in each of my patients?” 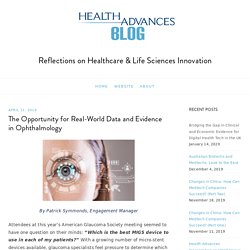 With a growing number of micro-stent devices available, glaucoma specialists feel pressure to determine which product is most appropriate for particular patients. This important question is difficult to answer due to the lack of quality comparative effectiveness studies across MIGS devices. Ex-UN chief Ban Ki-moon says US healthcare system is 'morally wrong' The former United Nations secretary general Ban Ki-moon has denounced the United States’ healthcare system as politically and morally wrong, and urged American leaders to enact publicly financed healthcare as a “human right”. 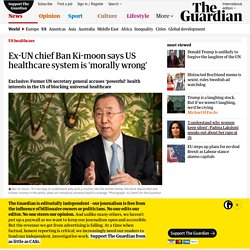 Ban made the comments in an exclusive interview with the Guardian in New York, as part of his work with The Elders, a group founded by Nelson Mandela to work on issues of global importance, including universal health coverage. The US has the world’s most expensive health system, accounting for nearly one-fifth of American gross domestic product and costing more than $10,348 per American. The United Kingdom, by comparison, spends a little under 10% of GDP according to the latest available statistics, and healthcare is free at the point of delivery. “It’s not easy to understand why such a country like the United States, the most resourceful and richest country in the world, does not introduce universal health coverage,” said Ban. Science is testing claims about psilocybin microdoses, and finding some truth. Dennis van der Meijden isn’t aiming to see the face of God, feel one with the cosmos, grasp the hidden reality of time and space, or embark on a sacred journey. 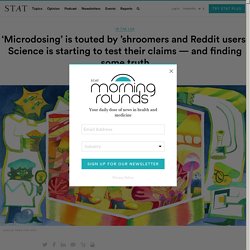 What the Dutch graphic designer, producer, and rapper (under the professional name Terilekst) wants — and gets — from his twice-weekly “microdoses” of psilocybin is more modest. “It sharpens all the senses, as if the frequencies of all of your atoms and energy field are raised a little bit and are being slightly more conscious,” said van der Meijden, 39, who told STAT he first microdosed psilocybin — the active ingredient in “magic mushrooms” — three years ago. Transforming psychedelics into mainstream medicines. In States With Medical Marijuana, Painkiller Deaths Drop by 25 Percent.

America has a major problem with prescription pain medications like Vicodin and OxyContin. 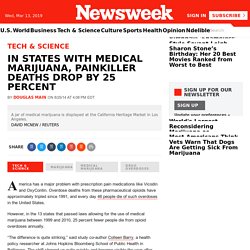 Overdose deaths from these pharmaceutical opioids have approximately tripled since 1991, and every day 46 people die of such overdoses in the United States. However, in the 13 states that passed laws allowing for the use of medical marijuana between 1999 and 2010, 25 percent fewer people die from opioid overdoses annually.

“The difference is quite striking,” said study co-author Colleen Barry, a health policy researcher at Johns Hopkins Bloomberg School of Public Health in Baltimore. Effect of yoga training on inflammatory cytokines and C-reactive protein in employees of small-scale industries. 10 Powerful Mudras and How to Use Them. In the practice of Yoga, you are encouraged to use your body in many ways, but ultimately with the intention of drawing yourself inward. 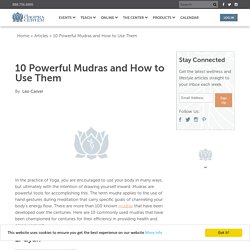 Mudras are powerful tools for accomplishing this. The term mudra applies to the use of hand gestures during meditation that carry specific goals of channeling your body’s energy flow. Types of Sound Healing Techniques and the Benefits of Sound Therapy. The concept of sound healing as an alternative medicine might raise some eyebrows. 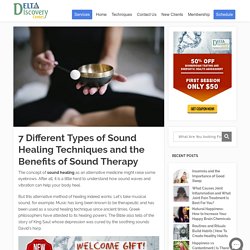 After all, it is a little hard to understand how sound waves and vibration can help your body heal. But this alternative method of healing indeed works. Let’s take musical sound, for example. Music has long been known to be therapeutic and has been used as a sound healing technique since ancient times. Popular Health Guru Sayer Ji Curates the Scientific Literature with His Bachelor’s Degree in Philosophy. There is a tool on Sayer Ji’s website GreenMedInfo.com that I wish I could recommend. 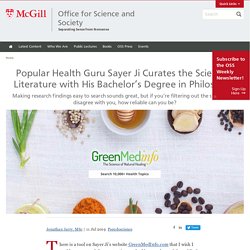 I am sometimes asked by members of the public for a place to go to find scientific papers in order to figure out what is “science” and what isn’t, and the Research Dashboard on Ji’s website appears to be up to that task. Adverse-pharmacological-action. GreenMedInfo. GreenMedInfo's new logo is big on "GreenMed" and small on "Research" — much like the website itself. 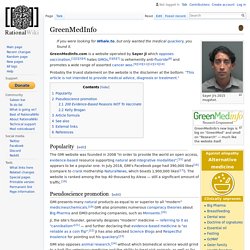 If you were looking for Whale.to, but only wanted the medical quackery, you found it. GreenMedInfo.com is a website operated by Sayer Ji which opposes vaccination,[1][2][3][4] hates GMOs,[5][6][7] is vehemently anti-fluoride[8] and promotes a wide range of assorted cancer woo.[9][10][11][12][13][14] Probably the truest statement on the website is the disclaimer at the bottom: "This article is not intended to provide medical advice, diagnosis or treatment.