Greenprint. Timeline Photos. Spectacular FLOATING HOME is Self-Built & Off-Grid. Solar Ecology at Penn State. Attending to the goal of the Solar Genome Project, which aims to deliver open-source methods and information exchange for characterization of the solar resource of the globe, the Solar Ecology Collaborative Lab at Penn State designed two low-cost and accurate solar radiometric systems: the SID and the ASE. 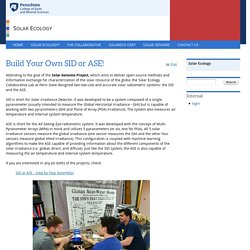 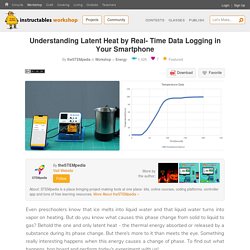 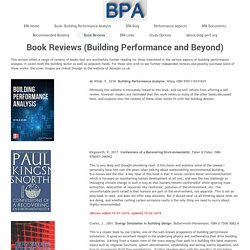 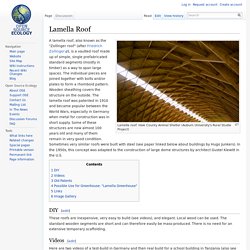 The individual pieces are joined together with bolts and/or plates to form a rhomboid pattern. Wooden sheathing covers the structure on the outside. The lamella roof was patented in 1910 and became popular between the World Wars, especially in Germany when metal for construction was in short supply. Some of these structures are now almost 100 years old and many of them remain in very good condition. DIY[edit] MIT Sustainable Design Lab. 13 ways your solar installation can get more expensive - Solar Power Rocks. Photo by cafecredit.com under CC2.0 From the homeowner’s perspective, installing solar is usually as easy as getting solar quotes, signing a contract, scheduling installation and flipping on the system. 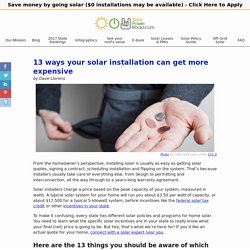 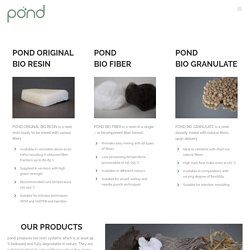 They are suitable to bind all natural fibers such as flax, hemp, pineapple, palm leaves, cotton, banana and jute resulting in making fully biodegradable products. In addition, it can also be applied to conventional fibers such as glass, carbon and kevlar. pond’s bio resin systems are mainly based on starch and designed to replace traditional oil based resins and plastics.

A Green City in China That Will Play a Major Role in Fighting Air Pollution - Dwell. Covering an area of approximately 175 hectares along the Liuzhou River, Forest City will have offices, houses, hotels, hospitals, and schools that will be entirely covered by a total of 40,000 trees and close to a million plants, including over 100 species. 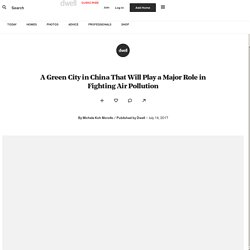 It will be connected to the main city of Liuzhou by a rail line with electrical train cars. Greenery, which will be planted in parks and gardens along the streets, as well as over the facades of all the buildings, will contribute to improved air quality as the plants will absorb both carbon dioxide and fine dust particles. The trees and plants will also serve as a noise barrier, improve Liuzhou’s biodiversity, and help decrease the region’s average air temperatures.

The new city will be able to accommodate an estimated 30,000 people, and its plant-covered buildings are expected to absorb close to 10,000 tons of carbon dioxide and 57 tons of pollutants, while producing approximately 900 tons of oxygen per year. Vo Trong Nghia Architects - HOME. Evolution of Solar Power - Breeze. This interactive infographic shows the cumulative installed solar power capacity per country, continent and the world as a whole between 1992-2015. 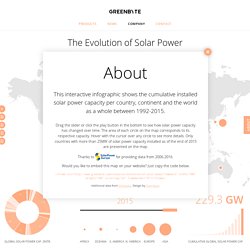 Drag the slider or click the play button in the bottom to see how solar power capacity has changed over time. The area of each circle on the map corresponds to its respective capacity. Hover with the cursor over any circle to see more details. Only countries with more than 25MW of solar power capacity installed as of the end of 2015 are presented on the map. Apollo-NG - Hackerspacecraft. For practical and economical reasons, Apollo-NG is based on two vehicles, just like Apollo-13: The CM pulls the LM to a destination, the LM parks in a geostationary very low earth orbit to quickly deploy the Hackerspace and its built-in lab and infrastructure, as well as R&D facilities and shelter for nomadic hackers. 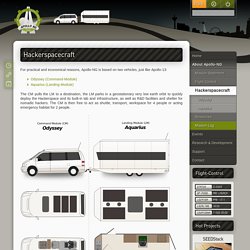 The CM is then free to act as shuttle, transport, workspace for 4 people or acting emergency habitat for 2 people. With the exception of diesel, to power the CM's primary engine, both systems are designed to be completely self-sustainable, harvesting solar, water, wind and biomass energy when and wherever possible. Design energy simulation for architect guide to 3d graphics by Zivan Jesic. An architect’s guide energy modeling in the design process by undefined. The passivhaus handbook cotterell, janet, dadeby, adam by undefined. Prefab architecture a guide to modular design and construction by undefined.

The end of scheduled obsolescence or L’increvable – Apart from UX. Who never had a problem with their washing-machine as little, as big and found themselves unable to fix it but by calling the manufacturer or worst case scenario, the plumber? 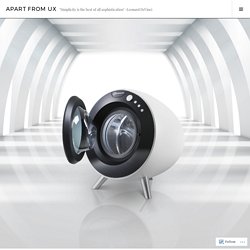 Besides that, it might have been another struggle to move the machine to where it is today due to its weight through the stairs. Accordion Fold Skylights. Tom Harris © Hedrich Blessing. Courtesy of Rebuild Foundation. One might think that an abandoned 1920s bank on Chicago’s South Side, crumbling from top to bottom—the roof long collapsed, exposing the interior to snow and rain for years—would be destined for a wrecking ball. Like so many other decaying structures in the area, that was certainly the fate of the Stony Island Savings & Loan building before artist, urban planner, and Chicago resident Theaster Gates intervened. Building Sustainably: Changing the Way We Look at Construction Materials - Engineering For Change. Study: Metals Used in High-Tech Products Face Future Supply Risks.

The study — which was based on previous research, industry information, and expert interviews — represents the first peer-reviewed assessment of the criticality of all of the planet’s metals and metalloids. “The metals we’ve been using for a long time probably won’t present much of a challenge. We’ve been using them for a long time because they’re pretty abundant and they are generally widespread geographically,” Graedel said. “But some metals that have become deployed for technology only in the last 10 or 20 years are available almost entirely as byproducts. You can’t mine specifically for them; they often exist in small quantities and are used for specialty purposes. LOW-TECH MAGAZINE. Zero Tool. Circuit board recycling GIF - HomemadeTools.net. Administrator Join Date Jan 2012 Location Colorado, USA Posts 8,407 Thanks 1,470 Thanked 825 Times in 490 Posts Circuit board recycling GIF The Following 2 Users Say Thank You to Jon For This Useful Post: Moby Duck (Yesterday), Seedtick (Today) Thread Information.

Why Architects Must Rethink Carbon (It's Not the Enemy We Face) - Point of View - January 2017. Susan Szenasy William McDonough, 2016 Courtesy Marta Chierego – World Economic Forum. Ralph Knowles: Pioneer In Solar Design. Distance Learning Textbooks. Microsculpture - The Insect Portraits of Levon Biss. US Environmental Protection Agency. MyEnvironment MyEnvironment provides immediate access to a cross-section of environmental data for any geographical location in the U.S. SS: Sustainable Infrastructure. Society of Building Science Educators. Scientists: How the New Focus on 1.5C is Reshaping Climate Research. Limiting global temperature rise to 1.5C has long been the goal of developing countries and those most at risk from climate change.

The Kids ISO 14000 Programme. Spectacular Bouverie Street Facade Utilises Fluoropolymer. Scientists Make Lithium-Air Batteries That Hold Their Breath. When Tesla Motors revealed its plan to buy solar panel maker SolarCity, the thread tying them together was battery storage. The idea, according to chief executive Elon Musk, is to combine solar panels with Tesla’s stationary Powerwall batteries. On cloudy days or in the evening, the stored energy could run your dishwasher or charge your Tesla Model S sedan.

For the batteries inside its cars and Powerwall systems, Tesla is betting on the same lithium-ion chemistry used in smartphones and hover-boards. Other companies and researchers think there is a better option. Many are experimenting with new lithium-air batteries that are smaller, lighter, and more energy-efficient than their forebears. On Monday, scientists from the Massachusetts Institute of Technology, the Argonne National Laboratory, and Peking University in China revealed a promising new version of lithium-air batteries. Do-It-Yourself (DIY) Wind Turbine. 4 Foot Wind Turbine - option for 6 Foot Sweep.

ThermalSwitch-StudioTJOA.pdf. Casa Tecnopanel « Elemental. Visitor 1. Feedback always welcomed... Please keep gotwind informed of your hard work, it helps us all. You can send pictures and ideas either by email or via theforum. Solar Tracker in the Internet Cloud - do it yourself. Show All 12 Items. In Sweden they are building high quality multifamily wood prefabs that we can only dream about here. Inhabitat - Green Design, Innovation, Architecture, Green Building. How to Build a Bicycle Generator - do it yourself. Untitled. Monitoring House Power Usage using an RTL-SDR. Build your own mini wind turbine from printer parts. EcoRenovator - View Single Post - DIY ventilation heat exchanger. ARDUINO SOLAR CHARGE CONTROLLER ( Version 2.0)

Six feet above the ground (above head height) the air is charged with more than 200 volts positive of free energy. This free energy is available da… BLDGBLOG. These Satellite Images of Earth "Breathing" Are Freaking Me Out. Untitled. Eco Viikki Helsinki, Finland. Solar Panel Testing Shunt Regulator. Solar 102 - Power Calculation. Henry Ford was into Hemp, so were his cars.