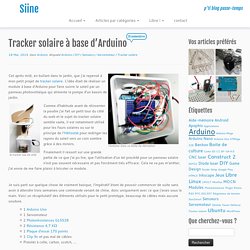 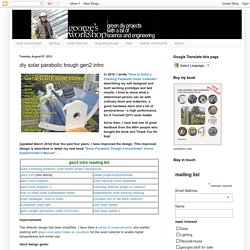 I tried to show what a determined person can do with ordinary tools and materials, a good hardware store and a bit of perseverance - a high performance Do It Yourself (DIY) solar heater. Since then, I have had lots of great feedback from the 600+ people who bought the book and Thank You for that! [updated March 2014] Over the past four years, I have improved the design. This improved design is described in detail my new book "Solar Parabolic Trough Concentrator: Home Experimenter's Manual". Improvements The reflector design has been simplified.

Gen2 design goals: Simpler hand or machine made ribs In the original version, there were three different types of ribs - now one rib does all three jobs. I show the methods I use to make small quantities by hand using patterns. (click any pic to enlarge) Electronic Projects. TripodTripod Mounts I am convinced that the best and strongest mount for PVs at ground level is one based on the design example of: poulektraxle.

Super Simple Sun Tracker. - Jose Pino's Projects and Tidbits. I Got some solar cells since two months ago, but it wasn't until the last week I decided to put those solar cells to work. 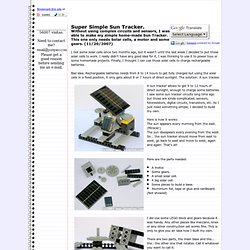 I really didn't have any good idea for it, I was thinking to use it to power toys or some homemade projects. Solar Tracker. Solar Tracker-1. This project will improve the output of your solar panel by about 40%. 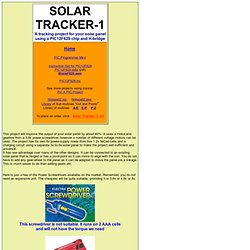 It uses a motor and gearbox from a 3.6v power screwdriver, however a number of different voltage motors can be used. The project has its own 6v power-supply made from five 1.2v NiCad cells and a charging circuit using a separate 3v to 6v solar panel to make the project self-sufficient and universal. It has one advantage over many of the other designs. It can be connected to an existing solar panel that is hinged or has a pivot-point so it can move to align with the sun.

You do not have to add any gear-wheel to the panel as it can be adapted to move the panel via a linkage. Here is just a few of the Power Screwdrivers available on the market. The Solar Project. Coordinates: Build Your Own Solar Battery Charger. First we need an old window, I got mine from a construction site. 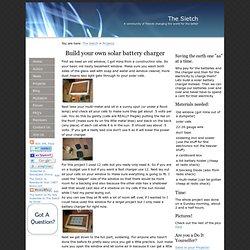 Its your basic old nasty basement window. Make sure you wash both sides of the glass well with soap and water and window cleaner, more dust means less light gets through to your solar cells. Next take your multi-meter and sit in a sunny spot (or under a flood lamp) and check all your cells to make sure they get about .5 volts per cell. You do this by gently (cells are REALLY fragile) putting the red on the front (make sure its on the little metal lines) and black on the back (any place) of each cell while it is in the sun. DIY Solar Panels. Mike Davis is an astronomer. 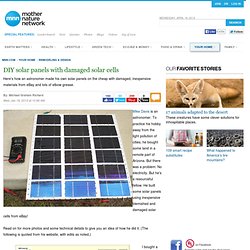 To practice his hobby away from the light pollution of cities, he bought some land in a remote part of Arizona. How to build a Solar Panel. Solar Panel Charging Rechargeable Batteries. I made a weather station to continuously monitor daylight and temperature. 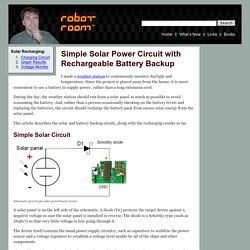 Since the project is placed away from the house, it is more convenient to use a battery to supply power, rather than a long extension cord. During the day, the weather station should run from a solar panel as much as possible to avoid consuming the battery. And, rather than a person occasionally checking on the battery levels and replacing the batteries, the circuit should recharge the battery pack from excess solar energy from the solar panel. This article describes the solar and battery backup circuit, along with the recharging results so far. 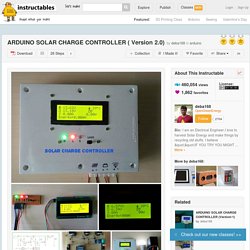 ARDUINO MPPT SOLAR CHARGE CONTROLLER (Version-3.0): 42 Steps (with Pictures) After lot testing we observed that MOSFET ( Q3 ) in ver-3.0 design is burning repeatedly.We tried to modify the existing software but not find any satisfactory result. 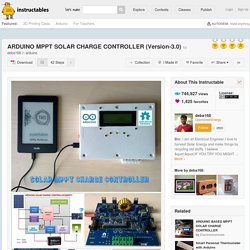 The other problem was that MOSFET Q1 ( in V-3.0) conduct even when there is no solar input. To solve the above problems and enhance the power handling capability we are modifying both the hardware and software.This is named as Version-3.1 Charge Controller.