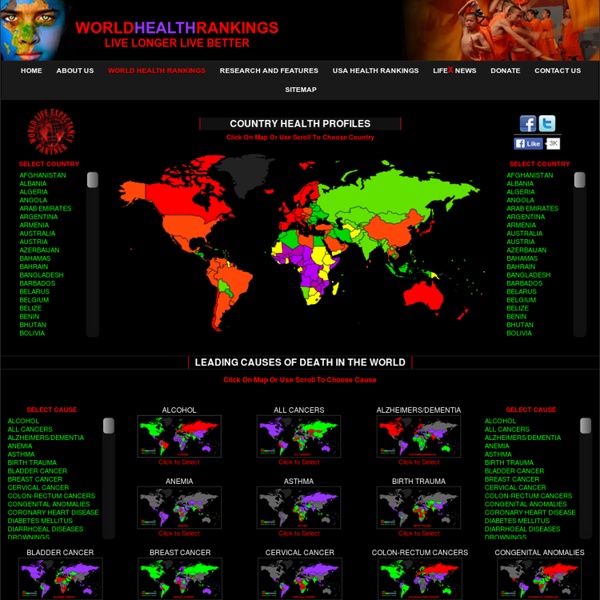 Access more than 36,000 Country Health correlations with this powerful comparison tool that let's you create side by side comparisons between any two countries in the world. Simply select a country from the list below to visit that country's page, we have selected a default comparison for you. Use the scrolling lists menu to select which country you want to compare it to or choose a new country. The tool will do the calculations for you and deliver the results instantly. Compare the Top 10 causes of death and see which country comes out on top. Related:  AGENDA 21-30 • Early Environmental Health - EH over time

Whistleblower Activist Exposes Covert Agenda Behind Geoengineered Global Climate Change Activist Michael Murphy Warns About Draconian Climate Change Legislation In The Works State of the Nation SOTN Editor’s Note A highly consequential global climate change conference recently took place in Paris, France. Several concerned activists, including Michael Murphy, attended this meeting in order to better understand the hidden agenda behind the extraordinary drive to pass sweeping global climate legislation. The primary stated purpose of this new regime of international laws and treaties is to exert absolute control over CO2 emissions at both the macro and micro levels throughout planet Earth. If successful, national governments and transnational corporations everywhere will be subjected to mandates and legislation limiting their CO2 emissions and carbon production. NWO Cabal Pursues Total Dominion Over The Earth’s Weather And Natural Resources The most disconcerting upshot of this conference has been well articulated by the following open letter written by Michael Murphy. Endnotes

The History of Sanitary Sewers AMA threatens holistic medicine (NaturalHealth365) If it was not already clear that natural medicine was in the cross-hairs of organized medicine, it certainly is now. Recently, the American Medical Association (AMA) began crafting its ‘ethical guidelines for physicians in the media’ to ‘defend the integrity of the profession.’ The new guidelines will target unorthodox medical information that the AMA deems dubious and unsubstantiated and create disciplinary guidelines for doctors who make public claims that do not align with the ‘best available science’. On the surface, these ethical guidelines may sound like a responsible way of discouraging doctors from making vague or erroneous statements and claims. A closer look, however, finds that the AMA is actually attempting to censor the free speech of doctors in media who draw attention to holistic medicine rather than the traditional Western treatments and medicines typically promoted by the pharmaceutical industry and conventional medicine.

London Lives 1690 to 1800 ~ Crime, Poverty and Social Policy in the Metropolis Agenda 21 in China and the Technocratic Vision for Global Dictatorship By Rusticus In the not-too-distant past, Antony Sutton was counted among the more respected historians in higher education, holding the title of research fellow at the esteemed Hoover Institute at Stanford University. Before being jettisoned from this coveted position by the Trilateral-affiliated dean, Sutton was (and remains) one of the most thorough academic researchers on the machinations of the Anglo-American Establishment to date. His work was so well-documented that, despite being antagonistic towards Sutton’s worldview, even Rhodesian globalist Zbigniew Brzezinski cited the accuracy of his research in his book, Between Two Ages. Of the erudite body of work produced by Antony Sutton, he remains best known for his books on banking, industrial, corporate, and military aid to Nazi Germany and the USSR by American companies. Needless to say, Sutton had to go. What I’ve managed to find thus far is fascinating, if not somewhat expected. Trilaterals Over Tianjin From China Daily: Problem?

Bhopal Disaster | Greenpeace On the night of December 2, 1984 a pesticide plant in Bhopal, India leaked methyl isocynate gas and other chemicals creating a dense toxic cloud over the region and killing more than 8,000 people in just the first few days. Take action right now to prevent a tragedy like Bhopal from ever happening again. Greenpeace is taking action On the twenty-fifth anniversary of the Bhopal disaster, a coalition of labor and environmental groups put out a call for safety at U.S. chemical plants. Just 300 of the 6,000+ high-risk chemical sites across the U.S. put more than 100 million Americans at risk if attacked. Recently, the House of Representatives approved a compromise chemical security bill (H.R. 2868) that could help prevent Bhopal-like catastrophes at some the highest risk U.S. chemical plants. The Senate will now take up the issue and a blue-green coalition is urging them to pass a stronger bill that would prevent chemical disasters at all of the highest risk chemical plants. The Bhopal Disaster

The Only Way Forward In 2015 By Brandon Turbeville In the year 2015, America and the rest of the world finds itself at a crossroads. The time is fast approaching when the world’s population will receive the final choice between a move toward true freedom or the clampdown of total oppression. Throughout recorded history, tyrannies have arisen and morphed into other forms with the end result being the creation and maintenance of a permanent worldwide oligarchy that is attempting to ensure the end of all independent thought and action. This oligarchy has maintained its control by a number of different methods, the concept of “divide and conquer” being one of the most important in its arsenal. In the past, there have been times where the façade has shown cracks and there have been individuals who have shown their perception of the obstacle of division and subsequently made strides to overcome it. Political divisions have taken America down to the lowest depths of division seen in decades. Later, the Huey P.

Home China: The Key to The New World Order By SGT Report Investigative Journalist James Corbett of the Corbett Report joins me with some very bad news about the New World Order. James says that despite the formation of the BRICS Banks, the Shanghai Gold Exchange and the new Asia Infrastructure Investment Bank (AIIB), the International Banker's plans to usher in their New World Order remain firmly in place and on track. James has carefully documented the "8 Immortal Families" in his report on China and the New World Order which shows how the 8 Immortals are totally connected to Henry Kissinger and the Rockefeller-Rothschild banking elite. "The West is being engineered into a world system of governance and government that can only come about through the rise of the East.

Love Canal :: Start of a Movement History: Love Canal: the Start of a Movement By Lois Marie Gibbs Lois Marie Gibbs was the key leader of Love Canal residents in their fight to be relocated away from a toxic dump containing over 20,000 tons of chemicals. She is the Executive Director of the Center for Health, Environment and Justice, which she founded in 1981 following the Love Canal struggle. CHEJ is a national organization that assists local people to become empowered to protect their communities from environmental threats. The following text was written by Lois Marie Gibbs and CHEJ in 1983 and updated in 1997 and 2002. The history of Love Canal began in 1892 when William T. However, the country fell into an economic depression and financial backing for the project slipped away. In 1953, after filling the canal and covering it with dirt, Hooker sold the land to the Board of Education for one dollar. Homebuilding around the old canal also began in the 1950's. The Love Canal Homeowners Association Summary of Events

5 Master Crimes We'll Have to Explain to Future Generations By Bernie Suarez Picture yourself still alive in the future. Perhaps after the new world order is fully operational (2030 or beyond). By then perhaps it’s too late. Humanity had become enslaved forever. Imagine a large percentage of humanity is now dead and gone. The “war on terror” that never did seem to end turned out to be the perfect tool to rationalize permanent war against everyone, anywhere, everywhere and at anytime. Before we knew it, it was too late. And there you are, in the future, seeing all of this. You then think to yourself, wondering what will you say to these children of the future to explain to them what your role was in preventing these now very key issues that the generations of the future will demand answers for. 1 – Over a decade of geoengineering and in-your-face weather manipulation. 2 – A generation without justice on 9/11 crimes. 3 – Open genetic (GMO) contamination of the food supply of the species. Do you have your story ready? Natural and Non-Toxic Products.