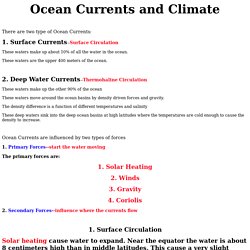 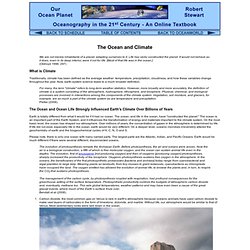 Life has verily constructed the planet. It would not behave as it does, even in its deep interior, were it not for life. [Most of that life was in the ocean.] (Oldroyd 1996: 297) What is Climate Traditionally, climate has been defined as the average weather: temperature, precipitation, cloudiness, and how these variables change throughout the year. For many, the term "climate" refers to long-term weather statistics. The Ocean and Ocean Life Strongly Influenced Earth's Climate Over Billions of Years Earth is totally different from what it would be if it had no ocean. Please note, there is only one ocean with many named parts. The evolution of photosynthesis remade the Archaean Earth. Carbon dioxide, the most common gas on Venus is rare in earth's atmosphere because oceanic animals have used carbon dioxide to make vast layers of carbonates in the form of limestone, dolomite, and marble. 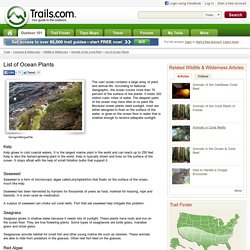 It is the largest marine plant in the world and can reach up to 250 feet. Kelp is also the fastest-growing plant in the world. Kelp is typically brown and lives on the surface of the ocean. It stays afloat with the help of small flotation bulbs that support it. Seaweed. Ocean Biome Plants Video (Seisen 3rd grade) Ocean Facts. Interesting Ocean Facts Area: about 140 million square miles (362 million sq km), or nearly 71% of the Earth's surface. 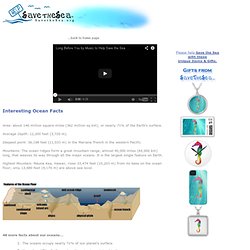 Average Depth: 12,200 feet (3,720 m). Deepest point: 36,198 feet (11,033 m) in the Mariana Trench in the western Pacific. Mountains: The ocean ridges form a great mountain range, almost 40,000 miles (64,000 km) long, that weaves its way through all the major oceans. It is the largest single feature on Earth. Highest Mountain: Mauna Kea, Hawaii, rises 33,474 feet (10,203 m) from its base on the ocean floor; only 13,680 feet (4,170 m) are above sea level. 48 more facts about our oceans... Coastlines The total length of the world's coastlines is about 315,000 miles, enough to circle the Equator 12 times. As coastal zones become more and more crowded, the quality of coastal water will suffer, the wildlife will be displaced, and the shorelines will erode. 60% of the Pacific and 35% of the Atlantic Coast shoreline are eroding at a rate of a meter every year. Fisheries Rising Sea Level. 15 Fun and Surprising Facts about the Earth’s Oceans. The oceans may make up 70 percent of the Earth’s surface, but we know very little about them, especially compared to our knowledge of the Earth’s land spaces — or even those of Mars and Venus. 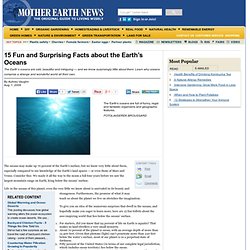 Consider this: We made it all the way to the moon a full four years before we saw the largest mountain range on Earth, lying below the oceans' surface. Life in the oceans of this planet, even the very little we know about is unrivaled in its beauty and strangeness. Furthermore, the promise of what it may teach us about the planet we live on stretches the imagination. To give you an idea of the numerous surprises that dwell in the oceans, and hopefully make you eager to learn more, here are 15 fun tidbits about the awe-inspiring world that lies below the oceans’ surface. For starters, did you know that 94 percent of life on Earth is aquatic? Hooked yet? 10 great facts about Portugal. Little Known Facts About The Ocean. Orcas (formerly known as killer whales), Orcinus orca, are actually dolphins. 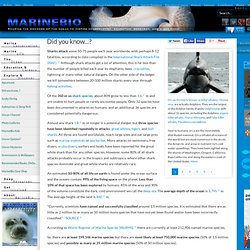 They are the largest of the dolphin family (Family Delphinidae with about 32 species, including the dolphins, pygmy killer whales, Feresa attenuata, and false killer whales, Pseudorca crassiddens). Next to humans, orca are the most widely distributed mammal. Orca inhabit all oceans of the world but are most numerous in the Arctic, the Antarctic and areas in nutrient-rich cold water upwellings. They have been sighted along the shores of Washington, Oregon, California, Baja California, and along the eastern coast of the United States. Fun Ocean Facts for Kids - Interesting Facts about the Pacific, Atlantic & Indian Oceans.