‘I Just Need the Comfort’: Processed Foods Make a Pandemic Comeback. Just a few months ago, Sue Smith considered herself a healthy eater. 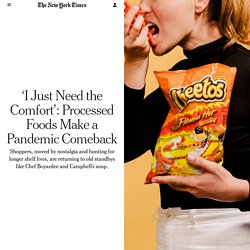 She ate salads with kale and quinoa. She counted calories. She eliminated processed sugar from her diet. She avoided dairy products. But in the past month, as the coronavirus pandemic made her housebound, Ms. During a trip to the grocery store, she bought SpaghettiOs. “I’m eating ice cream. As the coronavirus shutdowns continue across the United States, two growing trends involving how people eat — the rising amount of money spent on meals outside the home and the increased purchase of fresh or organic foods in grocery stores — have been reversed. That’s good news for big food companies like Kraft Heinz and J.M. Many large food businesses like the Campbell Soup Company, which had seen steady declines in soup sales the last two years, are now ramping up production and temporarily increasing wages for hourly employees to meet the higher demand.

Belgian-Dutch Study: Why in times of COVID-19 you can not walk/run/bike close to each other. - Veille, prospective, stratégie. Why we need to be more emotional to save the world - BBC Future. 10 grand challenges we'll face by 2050 - BBC Future. You don’t need to look very hard in a place like Miami to see how cities are changing in the 21st Century – rising sea levels are gradually making some of them disappear. 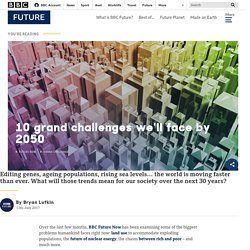 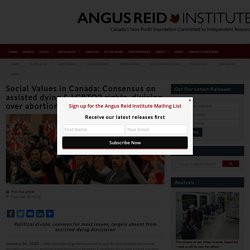 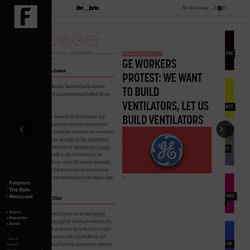 Their demands for the company: stop going about business as usual and start mass-producing ventilators for coronavirus patients, according to The Independent. Ventilators are in extremely short supply, especially in cities hit hardest by the pandemic, so the GE workers reasonably posit that the country needs them more than their usual output of jet engines right now.

War Effort. : GE workers protest and demand company build ventilators. General Electric factory workers protested on Monday in an act of solidarity to demand the company use its factories to produce ventilators for use in the fight against the coronavirus. 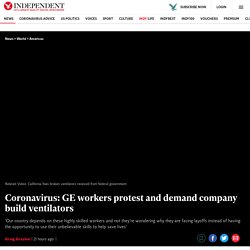 As the peak of coronavirus infections and deaths is still nearly two weeks away, GE workers have demanded the company convert its jet engine factories to begin producing ventilators. Vice News reported that workers at the company’s Massachusetts aviation facility stood six feet apart and held a silent protest. Scientists develop AI that can turn brain activity into text. Reading minds has just come a step closer to reality: scientists have developed artificial intelligence that can turn brain activity into text. 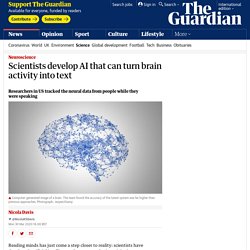 While the system currently works on neural patterns detected while someone is speaking aloud, experts say it could eventually aid communication for patients who are unable to speak or type, such as those with locked in syndrome. Struggling homeowners not your typical landlord: The case for rent forgiveness  In the age of COVID-19, where the unemployment rate is now estimated at 13.5% and many are struggling to pay next month’s rent, the necessity of suspending evictions, providing income supports for low-income households, and having a serious conversation about rent forgiveness couldn’t be clearer. 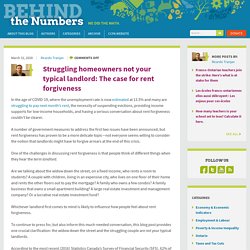 A number of government measures to address the first two issues have been announced, but rent forgiveness has proven to be a more delicate topic—not everyone seems willing to consider the notion that landlords might have to forgive arrears at the end of this crisis. The importance of new social norms in a COVID-19 outbreak. How can we achieve this? 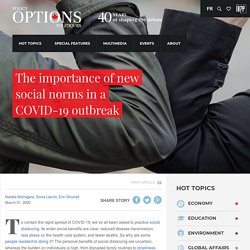 Our study of the 2009 H1N1 influenza outbreak offers lessons about the role of consistent and continuous public messaging in helping people choose behaviours that promote the social good over a personal cost. How Indigenous artists are getting even more creative during COVID-19. What’s an artist without an audience? 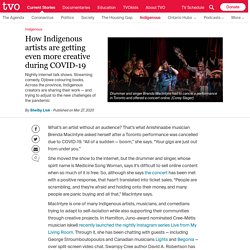 That’s what Anishinaabe musician Brenda MacIntyre asked herself after a Toronto performance was cancelled due to COVID-19. “All of a sudden — boom,” she says. “Your gigs are just out from under you.” She moved the show to the internet, but the drummer and singer, whose spirit name is Medicine Song Woman, says it’s difficult to sell online content when so much of it is free. How one cosmetics company is highlighting Indigenous representation. Ashley Callingbull, Autumn Peltier, and Buffy Sainte-Marie have at least two things in common: each is an Indigenous woman known for her work and activism, and each is the inspiration for a lipstick shade in Cheekbone Beauty’s Warrior Women makeup collection. 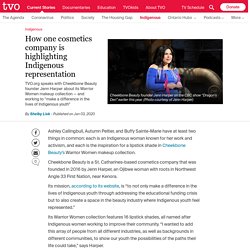 Cheekbone Beauty is a St. Catharines-based cosmetics company that was founded in 2016 by Jenn Harper, an Ojibwe woman with roots in Northwest Angle 33 First Nation, near Kenora. Its mission, according to its website, is “to not only make a difference in the lives of Indigenous youth through addressing the educational funding crisis but to also create a space in the beauty industry where Indigenous youth feel represented.” Its Warrior Women collection features 16 lipstick shades, all named after Indigenous women working to improve their community.

Coronavirus. Twelve Million Phones, One Dataset, Zero Privacy. These are the actual locations for millions of Americans. At the New York Stock Exchange … … in the beachfront neighborhoods of Los Angeles ... … in secure facilities like the Pentagon … … at the White House … Indigenous DNA database should be managed by its people. Canada’s use of DNA collection and analysis was expanded in March 2018 through the creation of five new DNA databases. Three were created for humanitarian purposes, and the other two are for criminal investigations. The RCMP National DNA Data Bank (NDDB) manages all five. Of particular note, especially for Canada’s Indigenous population, was the development of the Relatives of Missing Persons Index, which allows for the voluntary collection of the DNA of close relatives of missing persons. This database was promoted as a potentially useful tool in the ongoing investigation into missing and murdered Indigenous women and girls.

Brown said the proposed global taskforce should oversee and support the development of a vaccine and the production and distribution of medical equipment, and help to deal with the economic fallout of the crisis. To do the latter, it should coordinate the efforts of central banks; take steps to prevent the flight of capital from emerging market economies; and agree a joint approach to the use of government spending to boost growth.

Brown, who was at the centre of international efforts to lessen the impact of the 2008 financial crash, told The Guardian the taskforce should comprise heads of state, health experts and the heads of international organisations. In Just 10 Days, Dyson Designed a Completely New Ventilator Specifically for Covid-19 Patients. Fortunately for all of us, there are quite a few individuals and companies stepping up in different ways, from donating needed medical supplies to partnering with other manufacturers to build devices like ventilators. I've already written about how Apple was donating millions of masks to health care workers (10 million as of now), and how Tesla CEO Elon Musk purchased 1,000 ventilators from China and had them shipped to Los Angeles.

Then there's the effort from billionaires like Bill Gates and Mark Zuckerberg to bring more testing to Seattle and San Francisco, respectively. How your family can make the most of this time at home. Hong Kong’s Faulty Wristbands Allow Quarantined to Wander Free. Photographer: Anthony Wallace/AFP via Getty Images A glitch in Hong Kong’s electronic tracking system, designed to ensure people under compulsory quarantine orders stay at home, could potentially allow many to go outside undetected. Some Hong Kong residents returning from overseas have found they can’t register with the app that’s meant to track their movements via their mobile phone, meaning authorities have no information on their whereabouts during the mandatory 14-day self-quarantine period.

When Will Coronavirus Social Distancing Be Over? That Discomfort You’re Feeling Is Grief. We’re not going back to normal. To stop coronavirus we will need to radically change almost everything we do: how we work, exercise, socialize, shop, manage our health, educate our kids, take care of family members. Denmark’s Idea Could Help Avoid a Great Depression. In Coronavirus Fight, China Gives Citizens a Color Code, With Red Flags.

Opinion: What happens after the pandemic curve flattens? Michael Wolfson, PhD, is a former assistant chief statistician at Statistics Canada and a member of the Centre for Health Law, Policy and Ethics at the University of Ottawa. Neither A Black Swan Nor A Zombie Apocalypse: The Futures Of A World With The Covid-19 Coronavirus * Journal of Futures Studies. The Coronavirus Pandemic Will Change the World Forever. History Validates Fanfiction Smut Writers. Draining the Risk Pool. What I learned from studying billions of words of online fan fiction. Failed States. German military laptop with classified data sold on Ebay. Pedagogies of the futures: Shifting the educational paradigms.

US museum Dead Sea Scroll collection found to be fakes. 'Why can't I be viewed as an artist?' Indigenous Junos category debated among Manitobans. People kept working, became healthier while on basic income: report. The Verge Tech Survey 2020: how people feel about Apple, Google, Facebook, and more. 6. Unreal · Journal of Design and Science. Toronto builders try a new tactic to lure millennials to the hated suburbs. They call it ‘hipsturbia’

Hipsturbia, Co-Living And More Emerging Trends That Will Shape Real Estate In 2020. Only 53 per cent of Canadians trust core institutions, report says. The Modern Fragmentation of Lives & Identities. In 2040, your boss will track your every glance and keystroke. Robots, Regulation, and the Changing Nature of Public Spaces by Kristen Thomasen. Why having babies would be so complicated on a Mars colony - Business Insider. Dissatisfaction with democracy 'at record high' Why San Francisco's robot restaurants are failing: Eatsa, CafeX - Business Insider. The Personified City. The Unavoidable Problem of Self-Improvement in AI: An Interview with Ramana Kumar, Part 1. Delivery Apps Are Turning Gig Workers Into Drug Mules in Argentina. Uber Delivery Workers in Mexico Are Tracking Thieves Through Google Maps and WhatsApp Networks.