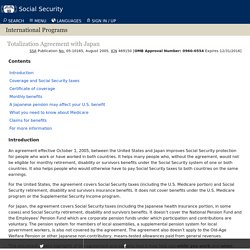 It helps many people who, without the agreement, would not be eligible for monthly retirement, disability or survivors benefits under the Social Security system of one or both countries. Complicating factors for U.S. nationals with Japanese pensions. Note: This is a sidebar story to the main article on the Japanese pension system here. 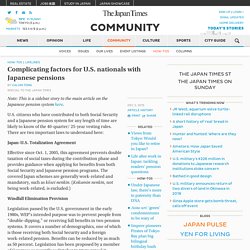 U.S. citizens who have contributed to both Social Security and a Japanese pension system for any length of time are likely to know of the 40-quarter/ 25-year vesting rules. There are two important laws to understand here: Japan-U.S. Totalization Agreement Effective since Oct. 1, 2005, this agreement prevents double taxation of social taxes during the contribution phase and provides guidance when applying for benefits from both Social Security and Japanese pension programs.

Windfall Elimination Provision Legislation passed by the U.S. government in the early 1980s, WEP’s intended purpose was to prevent people from “double-dipping,” or receiving full benefits in two pension systems. These laws have implications for two classes of recipients: For those who have been independently paying into Social Security for 40 or more quarters and into a Japanese scheme 25+ years, WEP applies.

Life after work in Japan: tackling readers' pension questions. Among the questions that Japan Times readers send to the Lifelines column, a perennial topic is navigating the Japanese pension system. 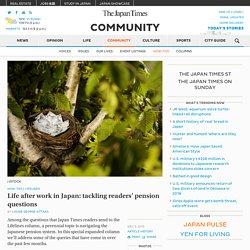 In this special expanded column we’ll address some of the queries that have come in over the past few months. I read that the Japanese government is thinking of reducing the requirement for pension qualification from 25 years to 10. When will the change take place? As the reader notes, to be eligible for a pension in Japan, you need to have paid in for a minimum of 25 years. However, according to the Japan Pension Service’s Tokyo office, the minimum will decrease to 10 years from April 2017. I know there is a lump-sum withdrawal option for foreigners. Foreign nationals who have paid into the Japanese pension system for a minimum of six months may claim back their payments — up to a maximum of 36 months’ worth — as a one-off lump-sum payment (ichikin) upon leaving the country. Complicating factors for U.S. nationals. U.S. citizens who have contributed to both Social Security and a Japanese pension system for any length of time are likely to know of the 40-quarter/ 25-year vesting rules. 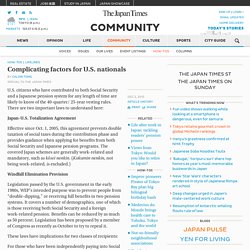 There are two important laws to understand here: Local Info for Global Expats. Expat on the Cheap: A Quick Guide to Affordable International Living. You might have noticed the staff of MakeUseOf occupies almost every corner of the globe. 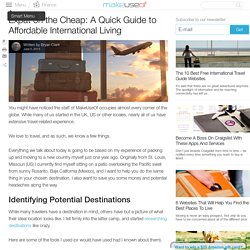 While many of us started in the UK, US or other locales, nearly all of us have extensive travel-related experience. We love to travel, and as such, we know a few things. Everything we talk about today is going to be based on my experience of packing up and moving to a new country myself just one year ago. Originally from St. Louis, Missouri (US) I currently find myself sitting on a patio overlooking the Pacific swell from sunny Rosarito, Baja California (Mexico), and I want to help you do the same thing in your chosen destination. The Best of Internet: Your Search for Expert Legal Help Gets Easier Now [US Only] 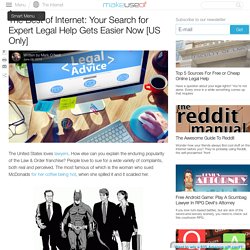 How else can you explain the enduring popularity of the Law & Order franchise? People love to sue for a wide variety of complaints, both real and perceived. The most famous of which is the woman who sued McDonalds for her coffee being hot, when she spilled it and it scalded her. So if you have a lawsuit itching to get out the gates and into the courtroom for the trial of the century, then good news. Finding the next Perry Mason to take your case, is as simple as turning on your computer and going online. The ever-helpful MakeUseOf is now here to put it all together for you in one article. Reddit Law Now of COURSE we are going to start with Reddit, because which subject is not covered by the cute little alien? Reddit Law gives you links to current legal-related news and discussions, and anyone remotely interested in the law should keep tabs on this page. Quora Law Priori Legal Similar sites include Hire an Esquire and Upcounsel.

Wall Street Journal Law Blog. 'Why I gave up my US passport' - BBC News. The Magazine feature on the number of expat Americans renouncing their US citizenship due to tax filing requirements prompted a huge response from readers. 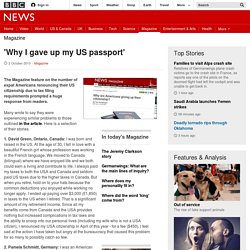 Many wrote to say they were experiencing similar problems to those outlined in the article. Here is a selection of their stories. 1. David Green, Ontario, Canada: I was born and raised in the US. At the age of 30, I fell in love with a beautiful French girl whose profession was working in the French language.