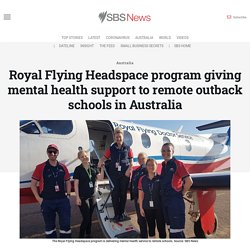 But thanks to the Royal Flying Doctor Service (RFDS), mental health practitioners are making the long journey out to the school much shorter, travelling by light plane. The program is a recent partnership between the national youth mental health service Headspace and the RFDS and it Is providing opportunities students would otherwise miss out on. The program gets mental health professionals into remote outback schools. SBS News "We don't have a school councillor in a place like this, so without the Headspace program there would be nothing," Oodnadatta Aboriginal School principle Aaron Holder told SBS News. "The challenges they may face include grief and loss, that can be a big one. But she said living in remote communities can also be a "protective factor" for Aboriginal youths.

"Having an actual face-to-face support service makes a difference. Royal Flying Doctor Service takes mental health programs to the most remote areas. The sugarcane farmer Mental health in the outback Diving on the reef The reef diving industry Mining and the reef Hard Bargain - Episode 4: Is Aldi wine any good? 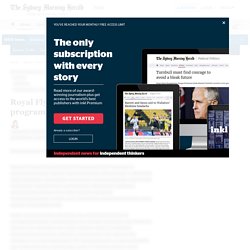 Hard Bargain - Episode 4: Is Aldi wine ... Royal Flying Doctor service gets an $18 million boost. For the first time, the Royal Flying Doctor Service will operate a for-profit service providing training to the hundreds of pilots in Australasia who fly Beechcraft King Air planes, the ones used to deliver medical treatment to remote areas. 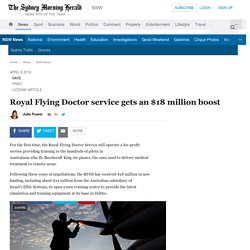 Following three years of negotiations, the RFDS has received $18 million in new funding, including about $12 million from the Australian subsidiary of Israel's Elbit Systems, to open a new training centre to provide the latest simulation and training equipment at its base in Dubbo. Currently operators of these light aircraft, including the RFDS which has a fleet of 18, go to Europe or the United States for the latest training, said David Charlton, the RFDS' general manager for aviation and strategic development. The new training facilities would allow RFDS to train its own pilots and doctors and nurses together by providing aero-medical simulation. Tourists, who already flock to the base, will be able to watch the training. Royal Flying Doctor Service. The Royal Flying Doctor Service is one of the largest and most comprehensive aeromedical organisations in the world, providing extensive primary health care and 24-hour emergency service to people over an area of 7.69 million square kilometres. 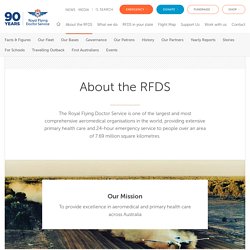 Our Mission To provide excellence in aeromedical and primary health care across Australia Delivered by a dedicated team of professionals, using the latest in aviation, medical and communications technology, and supported by a vast number of volunteers and supporters, the RFDS is vital for those that live, work and travel in rural and remote Australia. Dedication. Royal Flying Doctor Service. Graphic: New research paper New Release The Royal Flying Doctor Service has released a new research paper entitled "Providing Aeromedical care to Remote Indigenous Communities". 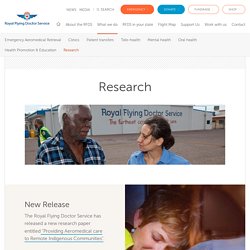 "This research is a first for the RFDS. It warns Indigenous children are over-represented in aeromedical retrieval data. Preventable or manageable illnesses such as pneumonia, asthma and croup are leaving kids so ill the only option is to fly them to hospital," said Martin Laverty, CEO of the Royal Flying Doctor Service of Australia. The research outlines illness and injury rates requiring a sample of 17,606 to be flown from remote communities to hospitals over a three year period. Flying Doctor Mental Health programs. Royal Flying Doctor Service.

Flying Doctor dental programs. A large proportion of people living in remote and rural Australia do not have access to a regular dental service. 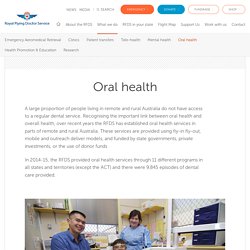 Recognising the important link between oral health and overall health, over recent years the RFDS has established oral health services in parts of remote and rural Australia. These services are provided using fly-in fly-out, mobile and outreach deliver models, and funded by state governments, private investments, or the use of donor funds In 2014-15, the RFDS provided oral health services through 11 different programs in all states and territories (except the ACT) and there were 9,845 episodes of dental care provided. Royal Flying Doctor Service. Remote consultations - often referred to as 'tele-health consultations' form the core of RFDS services. 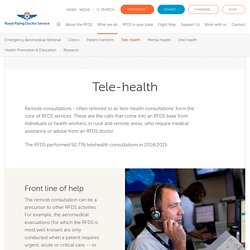 These are the calls that come into an RFDS base from individuals or health workers, in rural and remote areas, who require medical assistance or advice from an RFDS doctor. The RFDS performed 92,776 telehealth consultations in 2014/2015. Graphic: Telehealth doctor Front line of help The remote consultation can be a precursor to other RFDS activities. The large majority of remote consultations are conducted over the phone, using satellite and mobile phones. As part of the telehealth line, the RFDS has established medical chests around Australia containing a range of pharmaceutical and non-pharmaceutical items, which enable emergency and non-emergency treatment to be given to people living and working in remote areas. The medical chest has evolved over many years to cover a number of medical conditions that would be difficult for people living and working in remote areas to treat. 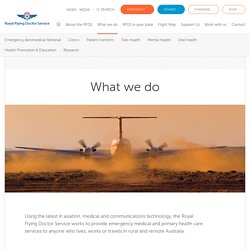 Medical services needed by people living in rural and remote areas of Australia are no different to services required in our large cities, but the vast distances that small rural populations have to overcome to access health services, provide a real challenge. The Royal Flying Doctor Service works to assist country Australians in many ways. With a waiting room of 7.13 million square kilometres, the RFDS provides 24-hour aeromedical emergency services that can reach anywhere, no matter how remote, within hours.