Documentaries III. Elitism. Elitism also refers to situations in which an individual assumes special privileges and responsibilities in the hope that this arrangement will benefit humanity or themselves. 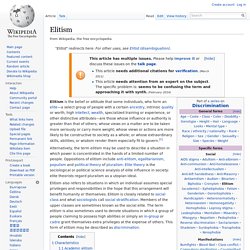 Elitism is closely related to social class and what sociologists call social stratification. Members of the upper classes are sometimes known as the social elite. The term elitism is also sometimes used to denote situations in which a group of people claiming to possess high abilities or simply an in-group or cadre grant themselves extra privileges at the expense of others. This form of elitism may be described as discrimination. Characteristics[edit] Some synonyms for "elite" might be "upper-class" or "aristocratic," indicating that the individual in question has a relatively large degree of control over a society's means of production.

Academic elitism[edit] Anti-elitism[edit] Egalitarianism[edit] Elitism endorses the exclusion of large numbers of people from positions of privilege or power. See also[edit] Elitism. Shane Gardner for Sheriff. If you could change one thing about the processing and treatment of the mentally ill in our justice system, what would that be? 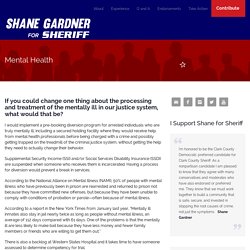 I would implement a pre-booking diversion program for arrested individuals who are truly mentally ill, including a secured holding facility where they would receive help from mental health professionals before being charged with a crime and possibly getting trapped on the treadmill of the criminal justice system, without getting the help they need to actually change their behavior. Supplemental Security Income (SSI) and/or Social Services Disability Insurance (SSDI) are suspended when someone who receives them is incarcerated. Having a process for diversion would prevent a break in services. According to a report in the New York Times from January last year, “Mentally ill inmates also stay in jail nearly twice as long as people without mental illness, an average of 112 days compared with 61 days. I know that recovery is real, and families can heal. Absolutely. Maker culture.

The maker culture is a contemporary culture or subculture representing a technology-based extension of DIY culture. 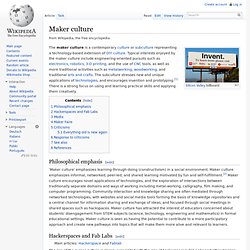 Typical interests enjoyed by the maker culture include engineering-oriented pursuits such as electronics, robotics, 3-D printing, and the use of CNC tools, as well as more traditional activities such as metalworking, woodworking, and traditional arts and crafts. The subculture stresses new and unique applications of technologies, and encourages invention and prototyping.[1] There is a strong focus on using and learning practical skills and applying them creatively. Philosophical emphasis[edit] 'Maker culture' emphasizes learning-through-doing (constructivism) in a social environment. Brit Morin: What Is the Maker Movement and Why Should You Care? My time spent in home economics as a teenager was pretty grim. 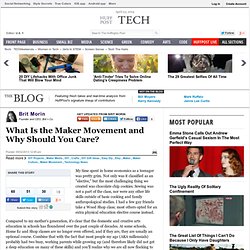 Not only was it classified as an "elective," but the most challenging thing we created was chocolate chip cookies. Sewing was not a part of the class, nor were any other life skills outside of basic cooking and family anthropological studies. I had a few guy friends take a Wood Shop class; most others opted for an extra physical education elective course instead. Compared to my mother's generation, it's clear that the domestic and creative arts education in schools has floundered over the past couple of decades. At some schools, Home Ec and Shop classes are no longer even offered, and if they are, they are usually an optional course. To further prove my case, take a look at something a Brit + Co. reader recently wrote me: "My mom was named Miss Betty Crocker of Springfield, New Jersey in 1967.

Which brings up a good point: what exactly does "DIY" mean these days? The larger companies are getting involved as well. Derek Sivers: How to start a movement. Thesis Blog has moved to ... Part of a Process – 1 A different thought in searching for a distinctive program that’d be appropriate and provide a stronger argument. 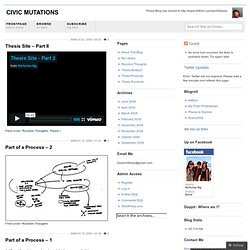 Rather than looking into relationship between users, what is the relationship between the platform and the users themselves. (Top) Facebook Diagram (Top) Twitter Diagram (Top) LinkedIn Diagram (Top) Dating Sites Diagram (i.e. match.com) Filed under: Random Thoughts Thesis Site – Part I Proposed thesis project site. Draft for Intro Working on a draft on what to present for next week. Filed under: Diagram, Random Thoughts, Thesis I The Human Network I’ve been following David Armano’s blog for a while now and find his presentation to be quite informative, and this one below is no exception. Progress: Diagram Looks like the diagram for Twitter is more straightforward than the one for Facebook, but is it communicating what I intended? Update: Added a YouTube Diagram below. Filed under: Diagram, Progress, Random Thoughts Progress: Facebook Diagram v2 Hypotheses?