21st Century Teens Vs 20th Century Teens. There's no longer a place like PlayStation Home. Smartphones blamed for decline in sex lives. Chevrolet Teen Driver Safety System. Your first car is more than just a car; it’s a symbol of independence and freedom. 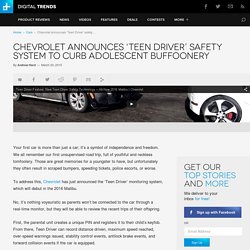 We all remember our first unsupervised road trip, full of youthful and reckless tomfoolery. Those are great memories for a youngster to have, but unfortunately they often result in scraped bumpers, speeding tickets, police escorts, or worse.

What Happens When Teens Try to Disconnect From Tech For Three Days. Ki Sung/MindShift Being without a phone can be an incapacitating feeling, possibly worse than leaving a wallet at home. 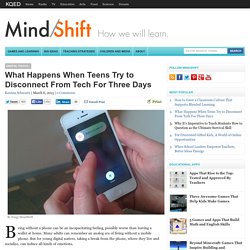 Many adults can remember an analog era of living without a mobile phone. But for young digital natives, taking a break from the phone, where they live and socialize, can induce all kinds of emotions. Recently, a line of teenage boys were frantically sending last-minute texts and posting to Facebook one final time before grabbing a manilla envelope and sealing their devices inside. These boys volunteered to abstain from using not just their phones but all digital devices for three days to better understand the role of technology in their lives. Digital Citizenship. on Pinterest. Risks in Using Social Media to Spot Signs of Mental Distress. The Samaritans, a well-known suicide-prevention group in Britain, recently introduced a free web app that would alert users whenever someone they followed on Twitter posted worrisome phrases like “tired of being alone” or “hate myself.” 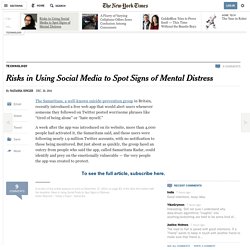 A week after the app was introduced on its website, more than 4,000 people had activated it, the Samaritans said, and those users were following nearly 1.9 million Twitter accounts, with no notification to those being monitored. But just about as quickly, the group faced an outcry from people who said the app, called Samaritans Radar, could identify and prey on the emotionally vulnerable — the very people the app was created to protect.

“A tool that ‘lets you know when your friends need support’ also lets you know when your stalking victim is vulnerable #SamaritansRadar,” a Briton named Sarah Brown posted on Twitter. A week and a half after the app’s introduction, the Samaritans announced it was reconsidering the outreach program and disabled the app. Dr. How Dating Apps Are Changing the Way We Behave in Public. Last month, on a blustery night the week before Christmas, my friend Jeff Ferzoco and I sat alone in a gay club in Brooklyn’s Williamsburg neighborhood discussing Grindr, the mobile dating app used daily by five million gay men around the world. 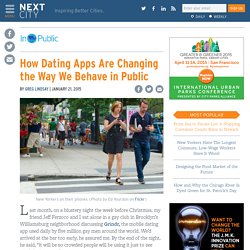 We’d arrived at the bar too early, he assured me. By the end of the night, he said, “it will be so crowded people will be using it just to see who’s in the room.” I believed him, because earlier that year I had seen Jeff navigate the social terrain of Manhattan’s East Village this way.