US of A National Security Issues

John Brennan and Restructuring the CIA. “I had the gravest forebodings about this organization [the Central Intelligence Agency] and warned the President that as set up neither he, the National Security Council, nor anyone else would be in a position to know what it was doing or how to control it.” 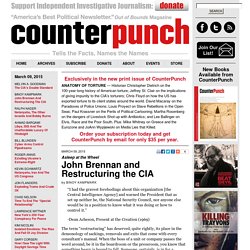 The War Nerd: More proof the US defense industry has nothing to do with defending America. By Gary Brecher On December 18, 2014 KUWAIT CITY—This has been a classic week in the defense procurement industry. 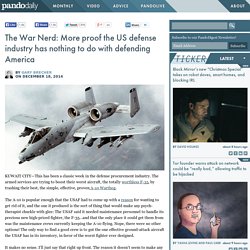 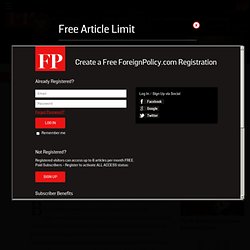 The aircraft belonged to the Federal Bureau of Investigation, which wanted to determine where the embassy's communications center was being located. But the Chinese construction crews hid their work on this part of the building by pulling tarpaulins over the site as it was being constructed. The CIA’s Memory Prison. The memory hole is deep at Guantánamo Bay. 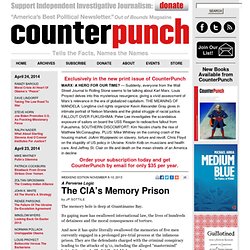 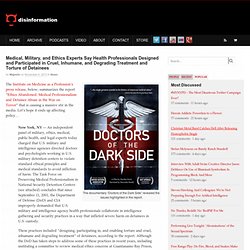 The Task Force on Preserving Medical Professionalism in National Security Detention Centers (see attached) concludes that since September 11, 2001, the Department of Defense (DoD) and CIA improperly demanded that U.S. military and intelligence agency health professionals collaborate in intelligence gathering and security practices in a way that inflicted severe harm on detainees in U.S. custody.These practices included “designing, participating in, and enabling torture and cruel, inhumane and degrading treatment” of detainees, according to the report.

How a Telecom Helped the Government Spy on Me. In 2004, my telephone records as well as those of another New York Times reporter and two reporters from the Washington Post, were obtained by federal agents assigned to investigate a leak of classified information. 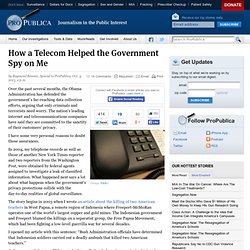 What happened next says a lot about what happens when the government’s privacy protections collide with the day-to-day realities of global surveillance. The story begins in 2003 when I wrote an article about the killing of two American teachers [1] in West Papua, a remote region of Indonesia where Freeport-McMoRan operates one of the world’s largest copper and gold mines. The Indonesian government and Freeport blamed the killings on a separatist group, the Free Papua Movement, which had been fighting a low-level guerrilla war for several decades. I opened my article with this sentence: “Bush Administration officials have determined that Indonesian soldiers carried out a deadly ambush that killed two American teachers.” The story prompted a leak investigation. I’m not so sure. National Security Agency Tasked with Targeting Adversaries' Computers for Attack Since Early 1997, According to Declassified Document. Washington, D.C., April 26, 2013 – Since at least 1997, the National Security Agency (NSA) has been responsible for developing ways to attack hostile computer networks as part of the growing field of Information Warfare (IW), according to a recently declassified internal NSA publication posted today by the non-governmental National Security Archive ("the Archive") at The George Washington University. 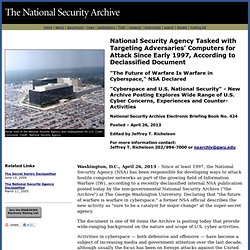 Declaring that "the future of warfare is warfare in cyberspace," a former NSA official describes the new activity as "sure to be a catalyst for major change" at the super-secret agency. The document is one of 98 items the Archive is posting today that provide wide-ranging background on the nature and scope of U.S. cyber activities. China May Have Helped Pakistan Nuclear Weapons Design, Newly Declassified Intelligence Indicates. CIA in 1977 Correctly Estimated South Africa Could Produce Enough Weapons-Grade Uranium "to Make Several Nuclear Devices Per Year" Report on the Libyan Nuclear Program Found that "Serious Deficiencies," "Poor Leadership" and Lack of "Coherent Planning" Made it "Highly Unlikely to Achieve a Nuclear Weapons Capability "Within the Next 10 years" Intelligence Estimates on Argentina and Brazil Raised Questions About Their Nuclear Programs and Whether they Sought a Weapons Capability National Security Archive Electronic Briefing Book No. 423 Posted - April 23, 2013 Edited by William Burr For more information contact: William Burr - 202/994-7000 or nsarchiv@gwu.edu Washington, D.C., April 23, 2013 – China was exporting nuclear materials to Third World countries without safeguards beginning in the early 1980s, and may have given Pakistan weapons design information in the early years of its clandestine program, according to recently declassified CIA records. 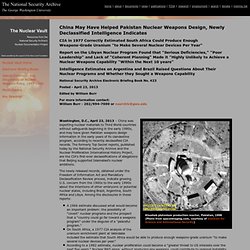