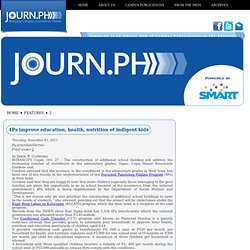 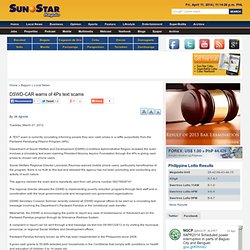 Department of Social Welfare and Development (DSWD)-Cordillera Administrative Region revealed the scam involves a circulating text scam claiming President Noynoy Aquino Foundation through the 4Ps is giving cash prizes to chosen cell phone users. Social Welfare Regional Director Leonardo Reynoso warned mobile phone users, particularly beneficiaries of the program, there is no truth to this text and stressed the agency has not been promoting and conducting any activity of such nature. 4Ps not a solution to PHL high poverty incidence – Sec. Soliman  4Ps: Breaking the shackles of poverty? - The Freeman » The Freeman Sections » Cebu News. MANILA, Philippines - NLEX struck back in the fourth period as it overcame Cafe France, 66-60, to stretch its win streak to four and stay at the top in the PBA D-League Foundation Cup at Ynares Sports Center yesterday. 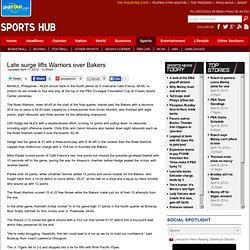 The Road Warriors, down 40-45 at the start of the final quarter, blazed past the Bakers with a decisive 20-8 run to seize a 60-53 lead, capped by a three-pointer from Eman Monfort, who finished with eight points, eight rebounds and three assists for the defending champions. Cliff Hodge led NLEX with a double-double effort, scoring 14 points and pulling down 14 rebounds, including eight offensive boards. Chris Ellis and Calvin Abueva also hauled down eight rebounds each as the Road Warriors lorded it over the boards, 62-39. Hodge tied the game at 51 with a three-point-play with 6:36 left in the contest then the Road Warriors capped their stretch-run charge with a 15-9 run to frustrate the Bakers. Sportshub ( Article MRec ), pagematch: 1, sectionmatch: 1. Northern Dispatch (nordis) Weekly » Blog Archive » 4Ps not for poor families. By KIMBERLIE N. 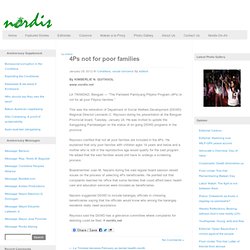 QUITASOLwww.nordis.net LA TRINIDAD, Benguet — “The Pantawid Pamilyang Pilipino Program (4Ps) is not for all poor Filipino families.” This was the reiteration of Depatment of Social Welfare Development (DSWD) Regional Director Leonardo C. Reynoso during his presentation at the Benguet Provincial board, Tuesday, January 24. Center for Women's Resources. 4Ps: Disempowering women – CWR study “While it correctly targeted the poorest of the poor, 4Ps or CCT creates a culture of dependence; and this dependence is disempowering,” according to the latest study of the Center for Women’s Resources (CWR), a research and training institution. 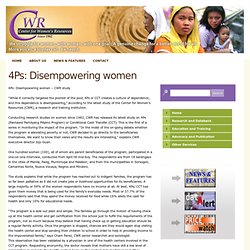 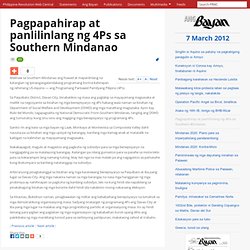 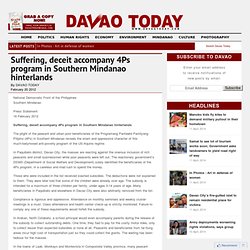 In Paquibato district, Davao City, the masses are reacting against the onerous inclusion of rich peasants and small businessmen while poor peasants were left out. Avoid using 4Ps for politics: Department of Social Welfare and Development. OFFICIALS of the Department of Social Welfare and Development (DSWD) warned local government officials against using the National Government’s conditional cash transfer program for their political interests. 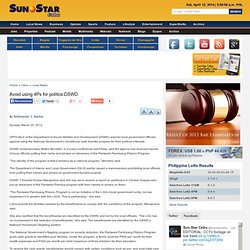 DSWD Undersecretary Mateo Montaño, in a press conference last Friday, said the agency has received reports of local officials putting their name and photos on streamers of the Pantawid Pamilyang Pilipino Program. “The identity of the program is that it remains as a national program,” Montaño said. The Department of Interior and Local Government (DILG) earlier issued a memorandum prohibiting local officials from putting their names and photos on government-funded projects. DSWD 7 Director Evelyn Macapobre said she has yet to receive a report on politicians in Central Visayas who put up streamers of the Pantawid Pamilya program with their names or photos on them. Local officials told to get names off 4Ps materials. MANILA, Philippines—Posters and streamers announcing the government’s conditional cash transfer (CCT) program should no longer bear the names and photos of governors and mayors, the Department of the Interior and Local Government (DILG) said on Saturday. 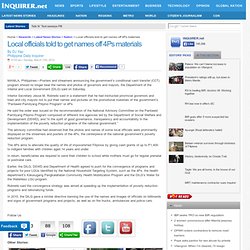 Interior Secretary Jesse M. DILG chief Jesse Robredo: 4Ps are for the poor, not for LGUs' publicity mileage. 4Ps-RPs Challenge To Meet MDG. THE PANTAWID PAMILYANG Pilipino Program (4Ps) implemented by the Department of Social Welfare and Development, is one of the responses of the Philippine government to the challenge of meeting the Millennium Development Goals (MDG), DSWD-IX 4Ps Regional Program Coordinator Ms. 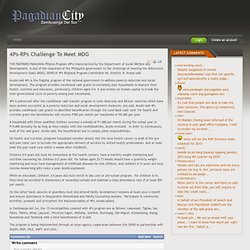 Lacierda, who was in Capiz with Deputy Spokesperson Abigail Valte, said that they were instructed by President Benigno S. 4Ps beneficiaries get 1st pay-out - Dalaguete, Cebu - Municipality of Dalaguete. 4Ps in Action: Improved Malnutrition in Cebu City - ALAGAD Party-List. 4Ps: Isang Dokumentaryo [Pantawid Pamilyang Pilipino Program] ‘Special’ children of the 4Ps. The schoolhouse in Barangay Cogon in the Island Garden City of Samal sits at the end of a dirt path leading from the community basketball court and barangay center. Dropping by one of the classrooms, we find students seated on the wooden desks, clean and bright-faced even if they are dressed in faded clothes, their feet shod in worn-out rubber slippers. When we meet the school principal, Antonio Arcega, we ask him what the impact has been on his school and students of the “Pantawid Pamilyang Pilipino Program” or “4Ps” administered by the Department of Social Welfare and Development.

“Oh, the school has improved a lot,” he exclaims with hardly any prodding. “We find the child beneficiaries attending classes daily and their school work has improved.” Before the 4Ps came into effect, he adds, the children from the poorest families were frequently absent, and when asked why they missed school, they would invariably reply that it was because they had nothing to eat for breakfast. Social Watch Philippines' Position Paper on the Pantawid Pamilyang Pilipino Program (4Ps) Australia pledges P200M to 4Ps. Posted on December 4, 2011 by admin By ELLALYN B.

DE VERA December 3, 2011, 7:50pm. Muslims, Christians get together to claim 4Ps. As part of the Philippine government’s poverty alleviation initiative, a Conditional Cash Transfer by way of the Pantawid Pamilyang Pilipino Program (4Ps Program), is being given to poor but deserving residents all over the Philippines. With the use of a Landbank ATM Card, these residents receive a regular stipend from the government to help ease their financial burdens.

In some instances, the recipients of this government dole-outs experience difficulty in obtaining their cash because ATMs are scarce in the rural areas. It is refreshing to note that Electronic Network Cash Tellers, Inc. (ENCASH), the country’s first independent ATM deployer, is meeting the challenge of deploying ATMs in areas not deemed viable by commercial banks. Recently, ENCASH deployed an ATM at the Lapuyan People’s Multi-Purpose Cooperative (LAPMUCO) in Zamboanga Sibugay. Eric J. ENCASH sees itself continuing to provide ATM services to the rural areas where ATMs are greatly needed by the community.