Guide: How to solve Yosemite memory leaks and C... I post this hoping to help those users who, like me, are experiencing high CPU usage and massive memory leaking with OS X core services and apps, leading to slow performance and battery drain. 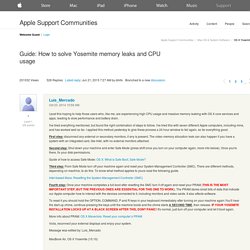 I've tried everything mentioned, but found the right combination of steps to follow. I've tried this with seven different Apple computers, including mine, and has worked well so far. I applied this method yesterday to give these process a 24 hour window to fail again, so far everything good. First step: disconnect any external or secondary monitors, if any is present.

The video memory allocation leak can also happen if you have a system with an integrated card, like Intel, with no external monitors attached. Second step: Shut down your machine and enter Safe Mode (press shift once you turn on your computer again, more info below). Mac Specs, Prices, Answers and Comparison @ EveryMac.com, Est. 1996. iComputer Denver Mac & PC Computer Repair Services and IT Network Support. Here are a few tricks to squeeze the absolute best performance out of your SSD on a Mac OS. 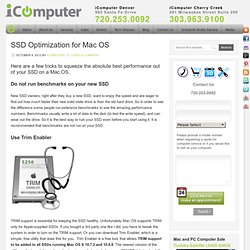 Do not run benchmarks on your new SSD New SSD owners, right after they buy a new SSD, want to enjoy the speed and are eager to find out how much faster their new solid state drive is than the old hard drive. Repairing permissions: What you need to know. When it comes to Mac OS X troubleshooting and maintenance, Repairing permissions may be the most frequently recommended course of action. 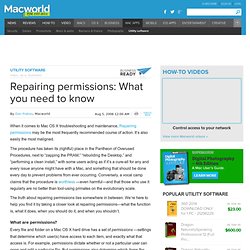 It’s also easily the most maligned. The procedure has taken its (rightful) place in the Pantheon of Overused Procedures, next to “zapping the PRAM,” “rebuilding the Desktop,” and “performing a clean install,” with some users acting as if it’s a cure-all for any and every issue anyone might have with a Mac, and something that should be done every day to prevent problems from ever occurring. Conversely, a vocal camp claims that the procedure is worthless —even harmful—and that those who use it regularly are no better than tool-using primates on the evolutionary scale. The truth about repairing permissions lies somewhere in between. We’re here to help you find it by taking a closer look at repairing permissions—what the function is, what it does, when you should do it, and when you shouldn’t.

What are permissions? What does repairing permissions do? . No. Is my Mac using too much memory??? Edit/Update: Modern releases of OS X (Mountain Lion and particularly Mavericks) treat memory much differently. I'm leaving this post as-is for historical reasons, but if you're running Mavericks you'll see things pretty differently. I have been a linux user for a few years, and I recently (6 months ago) switched to a MacBook. One of the reasons I originally switched from Windows to Linux was resource efficiency. There were others, but this is the one that leads to this discussion. A couple of weeks after I got my MacBook, I was working one day on a programming project for school with nothing open but iTerm and a couple of gvim windows. If you open the Activity Monitor (found in utilities) and select the "System Memory" tab at the bottom, you'll see something that looks roughly like this: OSX labels physical memory (RAM) as follows: Wired, Active, Inactive, and Free.

Wired memory is used by the OS and is pretty much untouchable. Free memory is just that, free. Mac OS X Lion Adds CoreStorage, a Volume Manager (Finally!) – @SFoskett. Apple fan boys won’t like to hear this, but Mac OS X was majorly deficient in an area near and dear to my heart. 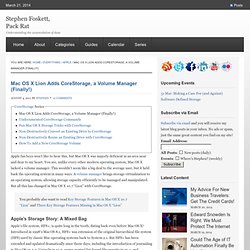 You see, unlike every other modern operating system, Mac OS X lacked a volume manager. This wouldn’t seem like a big deal to the average user, but it held back the operating system in many ways. A volume manager brings storage virtualization to an operating system, allowing storage capacity efficiently to be managed and manipulated. But all this has changed in Mac OS X 10.7 “Lion” with CoreStorage. Memory Usage Performance Guidelines: About the Virtual Memory System. Efficient memory management is an important aspect of writing high performance code in both OS X and iOS. 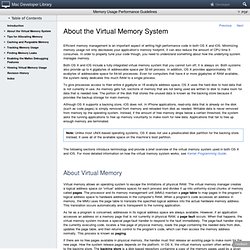 Minimizing memory usage not only decreases your application’s memory footprint, it can also reduce the amount of CPU time it consumes. In order to properly tune your code though, you need to understand something about how the underlying system manages memory. Both OS X and iOS include a fully-integrated virtual memory system that you cannot turn off; it is always on. Both systems also provide up to 4 gigabytes of addressable space per 32-bit process. In addition, OS X provides approximately 18 exabytes of addressable space for 64-bit processes. To give processes access to their entire 4 gigabyte or 18 exabyte address space, OS X uses the hard disk to hold data that is not currently in use. Although OS X supports a backing store, iOS does not. Understand Mac OS X processes on your Mac : by triviaware. 3 simple steps Open Terminal.app from Applications/Utilities folder and type command: ps -A > process.txt This command will list all currently running processes on your Mac and save this information into process.txt file in your home directory. 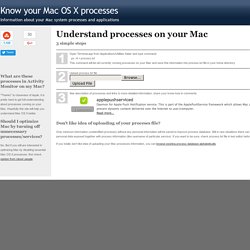