Recettes - Pearltrees. Autour de la gastronomie. Cuisine. RICARDO. La nourriture. Portails / Blogs. Collections de perles. Food in Every Country. (1) We Are Breakfast - French II Cooking Project. 403 Forbidden. French Restaurant Vocabulary and Phrases for Eating Out. The truth is, most waitstaff at restaurants in the French capital know at least some basic English, so ordering or paying is rarely a problem if your French is nonexistent. 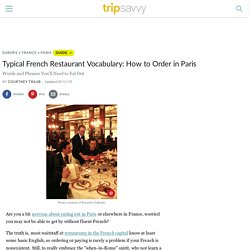 Still, to really embrace the "when-in-Rome" spirit, why not learn a few useful words and phrases commonly used in restaurants? You'll have a more interesting experience if you can use some of this basic Paris restaurant vocabulary, and may find the staff to be even warmer when they see you're making an effort to wield some French. Use this guide to learn basic expressions and understand most signs and menu headings at restaurants in Paris.. Also see our top 5 tips on avoiding unpleasant service in Paris -- and to learn how to distinguish between truly rude behavior and basic cultural differences that can lead to misunderstandings. Basic Signs to Learn and Watch for at Paris Restaurants: Arriving at the Restaurant: Basic Words and Expressions Do you have a table near the window, please? Paris Wise - Everything you need to know paris-wise - Journal - Au Resto - Reading a French Menu. Au Resto, pronounced oh resto, means “at the restaurant.” 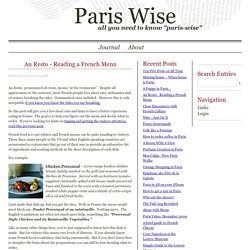 Despite all appearances to the contrary, most French people love short cuts, nicknames and, of course, breaking the rules. Grammatical ones included. However this is only acceptable if you know you know the rules you are breaking. So this post will give you a few short cuts and hints to have a better experience eating in France. The goal is to help you figure out the menu and decide what to order. Menus in French with English equivalents. A short French-English Glossary of essential restaurant terms. 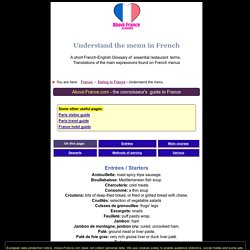 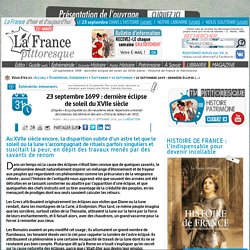 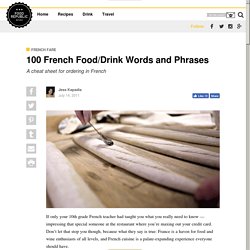 Don’t let that stop you though, because what they say is true: France is a haven for food and wine enthusiasts of all levels, and French cuisine is a palate-expanding experience everyone should have. Try out some of my extensive choice vocabulary for avoiding snails, raw beef and frogs’ legs (although why would you want to?) Or honing the basics for customizing your steak-frites and procuring the right water. Yes, you read that correctly. Bon appétit! Be sure to subscribe to Food Republic Today on Apple Podcasts or wherever you get your podcasts. Drinking Things that are potentially disgusting (but are usually delicious) 105 Words That Make Ordering Food in French Restaurants Easier. 105 Words That Make Ordering Food in French Restaurants Easier. How to Read a French Menu and Order Food Like the French.

Whether you’re dining in France or in some fancy French restaurant elsewhere, going face-to-face with a French menu is enough to make you rack your brains for all the French you know. 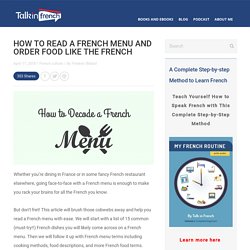 But don’t fret! This article will brush those cobwebs away and help you read a French menu with ease. How to Read a French Menu. Reading the menu in a French restaurant can be a little tricky, and not just because of language difficulties. 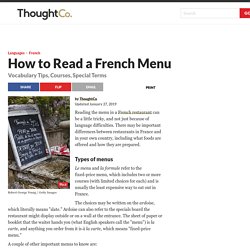 There may be important differences between restaurants in France and in your own country, including what foods are offered and how they are prepared. Types of menus Le menu and la formule refer to the fixed-price menu, which includes two or more courses (with limited choices for each) and is usually the least expensive way to eat out in France. How to Read a French Menu. Food. A Little Crepe History » Excuse my French. A crêpe (pronounced /kreɪp/, French IPA: [kʀɛp]) is a type of very thin, cooked pancake usually made from wheat flour. 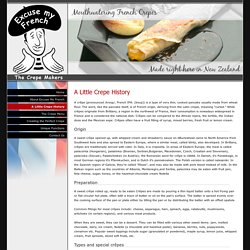 The word, like the pancake itself, is of French origin, deriving from the Latin crispa, meaning "curled. " While crêpes originate from Brittany, a region in the northwest of France, their consumption is nowadays widespread in France and is considered the national dish. Crêpes can be compared to the African injera, the tortilla, the Indian dosa and the Mexican sope. Crêpes often have a fruit filling of syrup, mixed berries, fresh fruit or lemon cream. A Little Crepe History » Excuse my French. Crepe Suzette Fun Facts. The internet is full of fabulous facts about everything from current events to the history basket weaving and crepe Suzette fun facts. 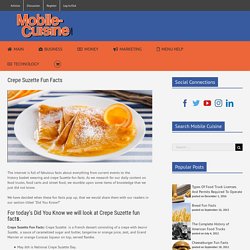 As we research for our daily content on food trucks, food carts and street food, we stumble upon some items of knowledge that we just did not know. We have decided when these fun facts pop up, that we would share them with our readers in our section titled “Did You Know?” For today’s Did You Know we will look at Crepe Suzette fun facts. Crepe Suzette Fun Facts: Crepe Suzette is a French dessert consisting of a crepe with beurre Suzette, a sauce of caramelized sugar and butter, tangerine or orange juice, zest, and Grand Marnier or orange Curacao liqueur on top, served flambe. May 6th is National Crepe Suzette Day.In restaurants, a Crepe Suzette is often prepared on a gueridon ( a small, often circular-table top) before the guests.The origin of the dish and its name is disputed. 10 Facts about Crepes.

Facts about Crepes inform the readers about a thin pancake. 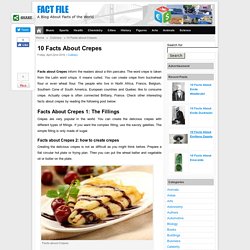 The word crepe is taken from the Latin word crispa. It means curled. French Crêpes From A to Z: 26 Things to Know. Nearly Every French Food Word You'll Ever Need when Travelling. When I first moved to Alsace, I wish I had had a French food dictionary! There are some things that French 101 (or even French 301) isn't going to prepare you for, like words describing meat and the different cuts of beef and pork. So I've put this little French restaurant food dictionary together based on what I've experienced and learned about eating out in Alsace. Feel free to suggest new entries! French-English mini-dictionary of common French food words. French Food Vocabulary Guide - French as you like it. Has this ever happened to you? You’ve settled at your table in a fine French restaurant, airily waved away the English menu, started perusing the French menu… and realized you’re completely lost.

Sure, you know that porc is pork. But what is travers de porc? And what about joues de boeuf? Does that really mean beef cheeks? There’s no question that at many French restaurants, extra vocabulary guidance is in order. Be baffled no more. Bon Appétit! French AZ Food Name Dictionary / List / Glossary » Cellar Tours. We have drawn up this handy French food names list with many ingredients you are likely to see on the menu while Vacationing in France or even on a French menu closer to home. It includes the essential French food words, helping you make the most of your French food and dining experiences. Please let us know if we should add any foods to the list. Bon appétit! French-English Food Dictionary. Cabillaud (m) cod. Cacahuète (f) peanut. Café. French-English Food A-K, cooking and foods of Provence, by Provence Beyond. À point cooked medium : least cooked: (bleu, saignant, à point, bien cuit) : most cooked. abaisse : a thin layer of pastry, undercrust abats : organ meats (other than poultry giblets) abattis giblets : poultry giblets abricot apricot acerbe bitter : (bitter; tart) to the taste agneau lamb agrumes citrus fruit aïgo bouido : Provençal garlic soup served over pieces of bread.

The Language of Food French food vocabulary terms are listed together with their English translations. Click on the links to bring up sound files that will allow you to hear the correct pronunciation of each word or phrase. Note that unlike in English, French food terms are generally preceded by an article such as le (the) or un (a). General Terms Meals. French Desserts Vocabulary. "David is clearly a very experienced and knowledgeable teacher. He places emphasis on pronunciation and encourages me to recall my vocabulary in a way that is useful for speaking French day-to-day.

Essential French Food Vocabulary: Regional Cuisines. 101 French Restaurant Vocabulary Words for Hungry Travelers. Dining in France can be an oh so magical experience. No matter which corner of the country you visit, you can rest assured you’ll get to taste something unique and absolutely delicious. If you don’t believe me, I dare you to read all about France’s regional cuisines and tell me your mouth isn’t watering by the end. Ricardo Cuisine : Recettes, Idées de Menus, Plan Repas & Vidéos. Orthographe : homophones grammaticaux et conjugaison - Collège de M'tsangamouji. Ecrire une recette de cuisine. Bouffe2. French Kitchen utensiles - French Etc.