Vegan Funfetti Cupcakes. I have one of those super cool moms who brought in cupcakes for my class on my birthday. 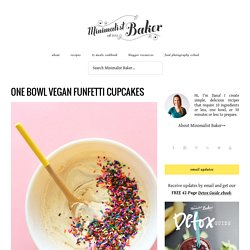 She always baked them in ice cream cones and she always topped them with tons of sprinkles. Moms, birthdays, and sprinkles are the best (in that order). I’m so excited I finally got around to vegan-izing funfetti cupcakes. Up until this point my favorite flavor of vegan cupcakes has been chocolate, so it was due time to try my hand at good old fashioned vanilla. Turns out, vanilla has my heart, especially when sprinkles are involved. This recipe may look a little complicated, but I assure you it only requires one bowl and less than 1 hour!

The ingredients are basic as well. Quintessential funfetti cupcakes have sprinkles inside the cupcake as well as on top of the frosting. These cupcakes are seriously dreamy. Fluffy Moist Perfectly sweet Vanilla infused Loaded with sprinkles Topped with MEGA fluffy buttercream Super shareable Slightly addictive One Bowl Vegan Funfetti Cupcakes Author: Minimalist Baker. 21 Easy Three-Ingredient Snacks That Are Actually Good For You. Golden Milk: The Simple Drink That Could Change Your Life. Golden Milk is a wonderful beverage to have in the evening and the benefits are extraordinary. 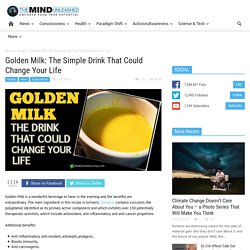 Golden Milk. 51 Paleo Snacks Anyone Can Love. No grains? 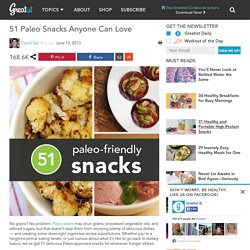 No problem. Paleo eaters may shun grains, processed vegetable oils, and refined sugars, but that doesn’t stop them from enjoying plenty of delicious dishes — and creating some downright ingenious recipe substitutions. Whether you’re a longtime primal eating fanatic or just curious about what it’s like to go back to dietary basics, we’ve got 51 delicious Paleo-approved snacks for whenever hunger strikes. Paleo Classics 1. 2. Quinoa Falafel with Avocado Tahini Dressing. I’ve loved falafel ever since my aunt Annie introduced me to it as a kid. 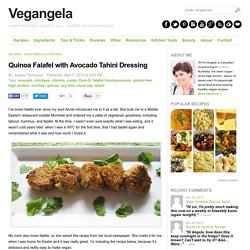 She took me to a Middle Eastern restaurant outside Montreal and ordered me a plate of vegetarian goodness, including tabouli, hummus, and falafel. At the time, I wasn’t even sure exactly what I was eating, and it wasn’t until years later, when I was in NYC for the first time, that I had falafel again and remembered what it was and how much I loved it. My mom also loves falafel, so she saved this recipe from her local newspaper. She made it for me when I was home for Easter and it was really great. I’m including the recipe below, because it’s delicious and really easy to make vegan: My mom made the following changes to the recipe: She lightly fried the onions before adding them to the mixtureShe used gluten-free bread to make the breadcrumbs (she’s gluten-sensitive)She used vegan sour cream (Tofutti) instead of the yogurt for the cucumber sauce The falafel were so good that I was craving them at lunch today. 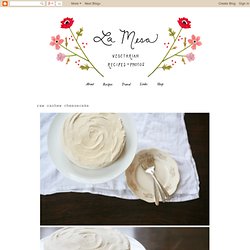 No idea. Should have done it ages ago! Cheesecake, a whole food? You better believe it. Not that you should it eat everyday or anything, but as far as desserts go - this is totally one you can feel good about your little ones eating. The preparation for this is much, much, much easier than a typical cheesecake. On the preparation --Do not skip soaking the raw cashews in water. For the crust: 1/2 cup raw pecans (pecans don't require soaking) a little more than 1/2 cup soft pitted dates 1/4 cup raw flaked coconut tiniest pinch of sea salt for the filling: 3 1/2 cups raw cashews (soaked & drained) 2/3 cup agave nectar 2/3 cup extra virgin coconut oil 2/3 cup fresh lemon juice 2 teaspoons vanilla extract or 2 vanilla beans, scraped Begin by soaking the nuts.

Press the crust evenly into the bottom of an 8-inch spring form pan (don't go up the sides). Serves 16. Vegan Avocado Recipes.