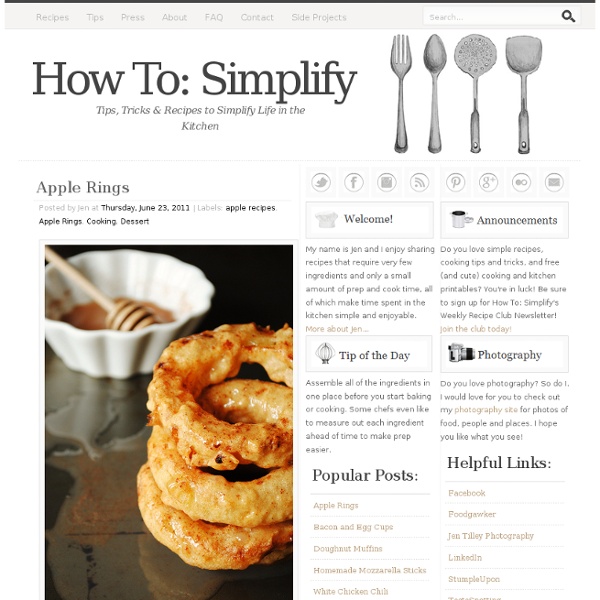 With the hot summer months upon us, I have found myself buying container after container of fruit. Whether it be strawberries, blueberries or even apples, when it comes to summer I love to sit down with a big bowl of fruit and satisfy my sweet tooth. The best future sister-in-law ever went berry picking the other day while I was out of town. She came home with an over abundance of raspberries and cherries. My husband had to stop by their house to drop something off and upon his return home, he showed up at the door with plastic containers full of sweet berries and cherries. Thoughts of syrups, tarts, scones, and muffins danced in my head...and the more ideas I came up with, the more I failed to realize that as I was brainstorming, I was also popping one raspberry after another into my mouth. At that point, I was back to square one...until I looked at the kitchen table and saw apples that were begging to be enjoyed. Next on my to do list? Apple Rings For the rings: Ingredients:

Cake Batter Chocolate Bark I don’t think I’ve ever been so excited to share a recipe with you. Or to lick a bowl. The secret ingredient here? You may think I’m crazy… but it’s a spoonful of actual cake mix. All you must do is whisk it well into the melted white chocolate. The truth is, I’ve never been much of a “bark” person. After laying on the couch slurping butter-soaked shrimp scampi, plowing through a bag of m&m’s and watching 7 hours of Lifetime television, I had my answer: cake batter. And I didn’t want to just make white chocolate bark. Did you know I have an obsession with sprinkles? I’d put them on everything if I could. Cake Batter Chocolate Bark 6 ounces high quality dark chocolate (I used Lindt 70%) 12 ounces high quality white chocolate (I used Lindt) 3 teaspoons yellow cake mix sprinkles of your choice (at least 3 tablespoons worth or more) Melt dark chocolate either in the microwave or a double boiler. Melt while chocolate. Once set, break into chunks.

what goes into making chocolate bowls Leave it up to me to mess up every recipe in the world... but on the flipside, by experiencing everything that goes wrong, I end up learning the most.I had seen these bowls from Stephanie's Kitchen, and decided it was a fantastic idea for my food independent study. ingredients: chocolate, and balloons! first, a giant bar of chocolate all the way from taiwan! and it's -special- grade, whatever that means. (i actually tried to pipe pretty lacy chocolate bowls first, but uh, that completely failed so i moved on. plus i don't like that pink fake chocolate.) balloons! tip number 2, after you have melted your chocolate in a double broiler and poured it into a bowl for dipping, let it cool before you dip your balloons. because although you are really excited to dip them and set them down like this... five seconds later you shall hear a POP and you (as well as your kitchen) will be covered in chocolate because apparently latex doesn't like heat.

One Hundred Percent EDIBLE Googly Eyes! After more than a year of painstaking directed research by our Experimental Foods Division, we have finally achieved one of our most important longstanding goals: the production of edible googly eyes. Like many other great inventions, it seems almost simple in retrospect, but in this write up we walk through the process and show you how to make your own. To begin with, we need a food-grade rigid transparent dome that will form the outer visual shell of the googly eyes. Empty gelatin capsules like these slide apart easily and come with one such dome on each end. You can get capsules like these in bulk at all kinds of “natural” and “health food” stores– or even at many grocery stores in the section where dietary supplements are sold. Note: Vegetarians will observe that gelatin is an animal product. While the gelatin capsules have a dome on each end, they have a lot of space in between that we really don’t need. The finished transparent domes, cut down to size.

Brickle A few weeks ago, I went to a barbeque. On the table there was plate of what looked to be a chocolate type dish that was crumbled up. I grabbed a piece, ate it, had eight more pieces, and then went on a mad hunt throughout the barbeque to see who brought the stuff and how much I would have to pay them for the recipe. After not too much work I tracked it down, and trust me. What’s fantastic about this stuff is many things. Directions 1) Line a rimmed baking sheet with foil. 2) Then layer in crackers. 3) Melt the butter in a saucepan and then stir in the brown sugar. 4) Once it has simmered for a few minutes, pour it straight on the crackers. 5) Next, stick your baking sheet in the oven at 325 degrees for 5-10 minutes. 6) When you take it out of the oven, pour the chocolate chips on the tray right away. 7) Meanwhile, crumble up some heath bars. 8) After 5 minutes, use a spatula to spread out the chocolate and make the chips flat. 9) Then just stick this whole thing in the freezer! Ok. Cool.

seddy5.typepad.com/blog/2010/05/how-to-make-marshmallow-fondant.html This time I decided to make it with those mini fruit flavored marshmallows. I had to sort them by colour first. I figured they would add a little bit of flavor to the fondant so I wouldn't have to add much flavoring oil. I use gel colours to dye my fondant but regular food colouring will work too. I also had lemon oil and coconut flavoring on hand.. oh la la the value brand (which still works fine). Step One: Take a couple of handfuls of marshmallows and put them in a microwave safe bowl. I like to make smaller batches because its easier to add the colour to the melted marshmallow than it is to work the colour into the fondant later. Step Two: Stick the marshmallows in the microwave for ten seconds at a time until the are puffed up and easily stir into a goo with a wooden spoon. Step Three: Add food colouring to the melted marshmallows until you get the colour you want. Step Four: Start folding icing sugar into the marshmallow goo until it becomes a soft and fluffy dough. Finished fondant! 1.

Pudding Cups Wicked Good Chocolate Peanut Butter Pudding Cups. They’re from the book, Sticky, Chewy, Messy, Gooey Treats for Kids by Jill O’Connor and just as good as their name states. Jill sent me and my niece a copy of her book as a little thank you for a post I did inspired by her Cheesecake Pops. From separating the egg yolks, to the measuring and mixing. She cooked the pudding. And mixed in the peanut butter… (thank you, Jill) … and the extra chocolate chips … Oh my! Let the pudding chill for at least four hours before eating. Here’s a link to the Pudding Recipe so you can print it out. Now, here’s the best part. It involves balloons to make bowls. Okay, I did help a little bit here. After you blow up the balloons, wash them off and let them dry. Okay, here’s what you do. Melt some semi-sweet chocolate, white chocolate or confectionery coating. Spoon a small amount on a wax-paper-covered baking sheet. Then take one of your prepared balloons and dip it in the chocolate. And repeat. Repeat. two… three!