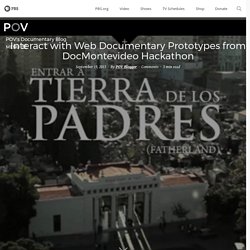 (Credit: Luciano Demarco). DocMontevideo held their first Hackathon in Montevideo, Uruguay from July 19-22, 2013. Over a period of 48 hours, three teams of filmmakers and technologists produced interactive prototypes for documentary film projects. Held in conjunction with the annual DocMontevideo Documentary Workshop, at the end of the Hackathon the teams pitched their final prototypes in front of an audience of industry professionals. Participating teams included Fatherland (Argentina), Frozen Man (Uruguay), and The Lost City of the Caesars (Chile). WWF PARALLAX SEQUENCE. COME/IN/DOC. The Boat. Sara is Missing by saraismissing. Also available on You found a phone belonging to a missing person. 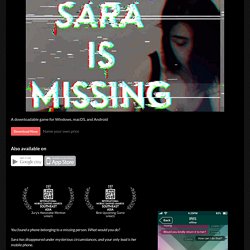 What would you do? Sara has disappeared under mysterious circumstances, and your only lead is her mobile phone. Search for clues by investigating Sara's personal messages, notes, emails, pictures and videos while trying to piece together her final days. Refuge. ONE SHARED HOUSE: a radical experiment in communal living. Unspeak Presskit 2.7. Biology of Story. Bread. A common story that connects us all. Gallipoli. POINTS OF VIEW. About The basis for this documentary project is video footage from B’Tselem, The Israeli Information Center for Human Rights in the Occupied Territories. 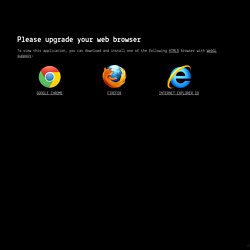 In 2007, B'Tselem began giving Palestinians living in the West Bank and Gaza video cameras as well as basic training in shooting and editing. Their hope was that the resulting video would allow Palestinians themselves to not only document the infringement of their rights, but also to present their the anger, pain, joy, and hope of their daily lives to both Israelis and to the international public. Points of View aims to increase exposure to B’tslem’s important and unique project through the creation of a map based interactive documentary that both situates the footage in its location of origin and creates new narrative threads of meaning from the stories that emerge.

Viewers can browse the clips randomly, or follow pre-determined video trails that are connected via events and tags. My Tribe Is My Life. Interactive - Bubble Dancers. I SPY DOC. Explore Shoreditch is an interactive documentary created to prototype this emerging genre. 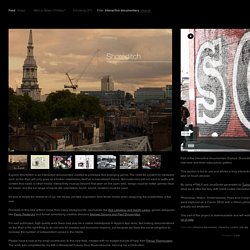 The need for content on hardware such as the iPad will only grow as it further establishes itself as a mainstream device. But customers will not want to settle with content that exists in other media. Interactivity must go beyond that seen on the open web, design must be better, genres must be mixed, and the full range of inputs (tilt, orientation, touch, sound, location) must be used. It's time to forget the restraints of our old media, yet take inspiration from those media when imagining the possibilities of the new. Pioneers in this new artform come from many backgrounds: Journalists like Zoé Lamazou and Sarah Leduc, games designers like Paolo Pedercini and former advertising creative directors Michael Simons and Paul Shoebridge. Hidden Wounds. Two Billion Miles: interactive video story. 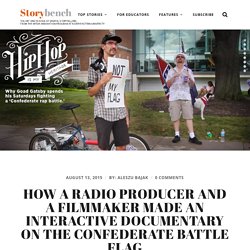 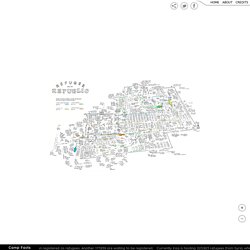 The aim of the makers, artist Jan Rothuizen, multimedia journalist Martijn van Tol, photographer Dirk Jan Visser and webdeveloper Aart Jan van der Linden, is to enrich the existing image of refugee camps by building an anatomical sketch of everyday life in the camp, through a combination of drawings, film, photography, sound and text to create a sensory experience. The interactive documentary, produced by Submarine Channel and De Volkskrant, premiered at the Amsterdam documentary festival IDFA on 20 November 2014. The Dutch version was released online on 28 November 2014 on De Volkskrant website together with a six page special in De Volkskrant newspaper. Simultaneously, OneWorld magazine published the documentary online as well as in a six page print publication in its monthly magazine. 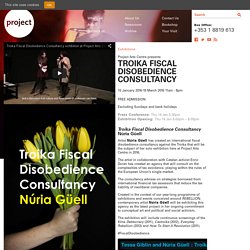 The artist in collaboration with Catalan activist Enric Duran has created an agency that will consult on the complexities of tax avoidance, playing within the rules of the European Union’s single market. The consultancy advises on strategies borrowed from international financial tax assessors that reduce the tax liability of neoliberal companies. GRETCHEN BENDER - Exhibitions at Project Arts Centre. Excluding Sundays and bank holidays The exhibition will close early on the following dates: 22 December 6.00pm 23 December 1.00pm You are welcome to join us for the opening of this exhibition on Thursday 22 October 6.00pm – 8.00pm. 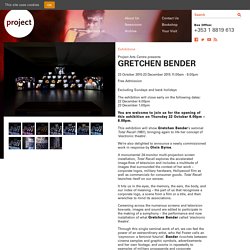 Animation: Norman McLaren's Pas de Deux. Making Way to Go, a Psychedelic Walk in the Park. ANIMAL’s feature Game Plan asks game developers to share a bit about their process and some working images from the creation of a recent game. 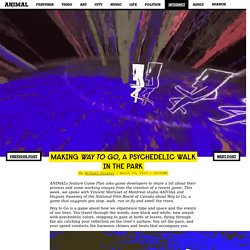 This week, we spoke with Vincent Morisset of Montreal studio AATOAA and Hugues Sweeney of the National Film Board of Canada about Way to Go, a game that suggests you stop, walk, run or fly and smell the roses. Way to Go is a game about how we experience time and space and the events of our lives. You travel through the woods, now black and white, now awash with psychedelic colors, stopping to gaze at birds or leaves, flying through the air, catching your reflection on the river’s surface. 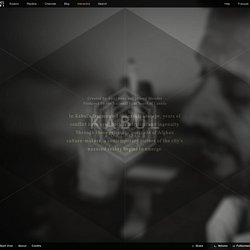 The project brings to light a range of storytellers: artists, journalists, filmmakers, actors and photographers, from Kabul -- a city normally not in the public eye for its arts, but for its problems. A portrait of any kind is a composed image; a direct visual study that reveals a subject’s essence. Though originally a painterly practice, photography and portraiture have had a long relationship, due to the relative affordability of a photograph. In the interactive medium, the art of portraiture has once again evolved, becoming that much more accessible.

Emigration Isle. NFB/Interactive - Circa 1948. Season One - Serial. A high-school senior named Hae Min Lee disappeared one day after school in 1999, in Baltimore County, Maryland. A month later, her body was found in a city park. She'd been strangled. Her 17-year-old ex-boyfriend, Adnan Syed, was arrested for the crime, and within a year, he was sentenced to life in prison.

The case against him was largely based on the story of one witness, Adnan’s friend Jay, who testified that he helped Adnan bury Hae's body. But Adnan has always maintained he had nothing to do with Hae’s death. Join #FindingAmerica. Whiteness Project. StoryCode: Immersive Media. July, 2013 Coliloquy Coliloquy, a leading digital publishing innovator continues to break new grounds and has just launched two new projects: Kingdom Keepers Insider is an interactive writing app for middle grad fans of Ridley Pearson's Kingdom Keepers series. He wrote the 7th book in the series and is inviting kids to help by voting on plot points and contributing fan fiction. Sandy Storyline. Question Bridge. Read: Interview with David Dufresne, Creator of Upcoming Interactive Documentary Game “Fort McMoney” – Center for Documentary Studies at Duke University. Still from the trailer for “Fort McMoney” A much-anticipated interactive documentary game about the Canadian oil industry will launch on November 25.

Coproduced by the National Film Board of Canada and Toxa, a Montreal-based media company, Fort McMoney will give players the power to decide the (virtual) future of Fort McMurray, a real oil-boom town in Alberta, Canada at the heart of the world’s energy future. Researched over the course of two years and shot over two months, Fort McMoney is the hybrid documentary/video game creation of David Dufresne, a French journalist based in Montreal, whose first interactive documentary, Prison Valley, garnered a host of international awards.

To learn more about this groundbreaking work, CDS digital arts and publishing intern Tory Jeffay interviewed Dufresne over email about interactivity in documentary, the mechanics of game play, and the project’s evolution. Read the interview below, and view the trailer and sign up to play Fort McMoney here. Fort McMoney. Cover Story: Bat for Lashes. Across 2006’s Fur and Gold and 2009’s Two Suns, much of Khan’s mystic brand of pop involved a tension between open-hearted sympathy and something more rogue, her guileless voice keeping the flights of fancy just earthward enough. She wants the new album to sound like “an inventor living in a lighthouse” somewhere on the English coast.

Twist your ear the right way and you can sort of hear it: that salt-washed, weathered, mechanical, isolated, magical, guiding feel, looking to a man whose purpose is to generate beams of light as well as light-bulb moments. Khan wrote a song about a lighthouse keeper of sorts for The Haunted Man, though it didn’t make the final record. A Game of Shark and Minnow - Who Will Win Control of the South China Sea? THE JOHNNY CASH PROJECT. I Love Your Work · An interactive portrait by Jonathan Harris. Gaza Sderot - Life in spite of everything. U.S. Gun Killings in 2010. Out of Sight, Out of Mind: A visualization of drone strikes in Pakistan since 2004. Range Rover Evoque Victoria Beckham Commercial - 2015 SUV Cars TV HD. Blacknegative.

Combining Artwork, Animation, Sound Design, Music and Interactive elements “Little Details” tells the story of Bella who upon discovering an old photograph finds herself on an adventure through the story behind the mysterious photo as she searches for its owner. Interactive Documentary. Jheronimus Bosch - the Garden of Earthly Delights.