Caring for a COPD Patient at Home - COPD Center. Caring for someone with chronic obstructive pulmonary disease (COPD) at home can bring up a number of new responsibilities. 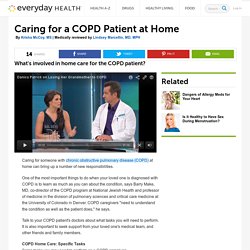 One of the most important things to do when your loved one is diagnosed with COPD is to learn as much as you can about the condition, says Barry Make, MD, co-director of the COPD program at National Jewish Health and professor of medicine in the division of pulmonary sciences and critical care medicine at the University of Colorado in Denver.

When breathing is a burden: How to help patients with COPD - American Nurse Today. Continuing Education Hours : 1.9 and 0.5 Rx hours Chronic obstructive pulmonary disease (COPD) refers to a condition of chronic airflow limitation. 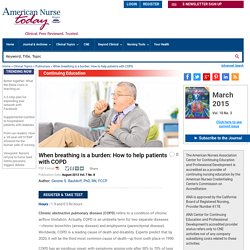 Actually, COPD is an umbrella term for two separate diseases—chronic bronchitis (airway disease) and emphysema (paren­chymal disease). Worldwide, COPD is a leading cause of death and disability. If you smoke, you must quit - 12 Must-Know Facts About COPD. Supporting rehabilitation training of COPD patients through multivariate sensor-based monitoring and autonomous control using a Bayesian network: p... The Healthy Salt Pipe Inhaler. The way you use one of these salt pipe inhalters (all brands work quite the same) is by simply inhaling the salt particles by breathing in through your mouth and exhaling through your nose. 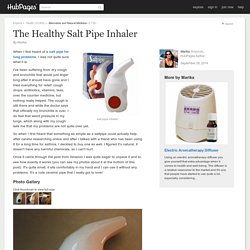 It's recommended that we use the salt pipe for about 15-20 minutes every day for best effect. COPD affects 23 million Americans, and as of yet, there is no cure. Quit smoking before it's too late! www.quitgroups.com. Pats.200706-084SD# In this article, we explore the relationships between COPD and stigma and gender, particularly how these key elements may interact to affect experiences of individuals with COPD within their social milieu. 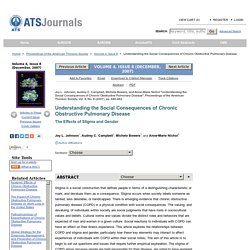 The aim of this article is to review the literature and to begin to set out questions and issues that require further empirical exploration. The literature review was conducted using the following keywords: chronic obstructive pulmonary disease (COPD); gender, gender identity; stigma, discrimination, prejudice, stereotyping; culture; and ethics. Due to the a priori knowledge that there has been little research conducted on this topic, an allied search was also done to explore the issues of gender and stigma in people with lung cancer. Inhalers for Chronic Obstructive Pulmonary Disease. COPD. This leaflet is about inhalers for chronic obstructive pulmonary disease (COPD). 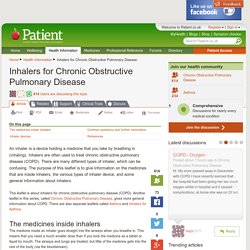 Another leaflet in this series, called Chronic Obstructive Pulmonary Disease, gives more general information about COPD. There are also separate leaflets called Asthma and Inhalers for Asthma. The medicine inside an inhaler goes straight into the airways when you breathe in. What a Spirometry Score Can Tell You About Your COPD. Spirometry is a tool that plays an important role in chronic obstructive pulmonary disease (COPD) from the moment the disease is suspected all the way through its treatment and management. 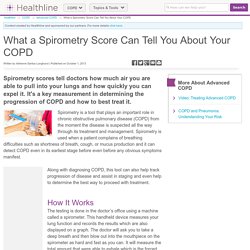 Spirometry is used when a patient complains of breathing difficulties such as shortness of breath, cough, or mucus production and it can detect COPD even in its earliest stage before even before any obvious symptoms manifest. Along with diagnosing COPD, this tool can also help track progression of disease and assist in staging and even help to determine the best way to proceed with treatment.

How It Works The testing is done in the doctor’s office using a machine called a spirometer. This handheld device measures your lung function and records the results which are also displayed on a graph. d59b572967657af70b768d070cb6d675.jpg (JPEG Image, 600 × 1500 pixels) - Scaled (66%) Smart Collar Brings Us One Step Closer to Understanding Dogs.

As an owner and avid dog lover, I often find myself wondering what exactly my dog is thinking or feeling. 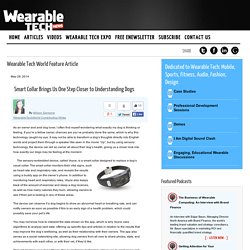 If you’re a fellow owner, chances are you’ve probably done the same, which is why this technology caught my eye. It may not be able to transform a dog’s thoughts directly into English words and project them through a speaker like seen in the movie “Up”, but by using sensory technology, the device can tell an owner all about their dog’s health, giving us a closer look into how exactly our dogs may be feeling at the moment. The sensory-embedded device, called Voyce, is a smart collar designed to replace a dog’s usual collar. 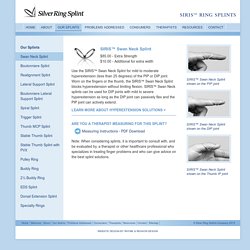 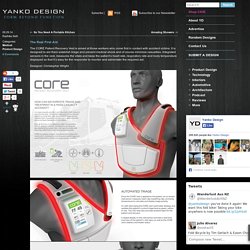 It is designed to aid them establish triage and prevent medical shock and of course minimize casualties. Integrated sensors in the vest, measures the vitals and keep the patient’s heart rate, respiratory rate and body temperature displayed so that it’s easy for the responder to monitor and administer the required aid. New Wearable For Managing Chronic Illness. By Christine Kern A prototype for proactive COPD patient management was unveiled at Dreamforce 2014. 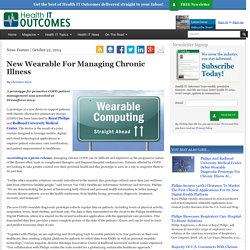 A prototype of a new device to support patients with chronic obstructive pulmonary disease (COPD) has been launched by Royal Philips and Radboud University Medical Center. The device is the result of a joint venture designed to leverage mobile, digital, and cloud technological applications to improve patient outcomes, care coordination, and patient empowerment to healthcare. According to a press release, managing chronic COPD can be difficult and expensive as the progressive nature of the disease often leads to complicated therapies and frequent hospital readmissions. Patients affected by COPD are looking to take greater control over their personal health and this prototype is seen as a way to empower them to do just that. The new COPD wearable diagnostic prototype collects regular data on patients, including levels of physical activity, respiration levels, heart rhythm, and heart rate.

Devices That Have a Respiratory Monitor. Track how you sleep, move and eat. Spire: Respiration and daily activity tracker for healthy body and mind. Copd-infographic.jpg (JPEG Image, 800 × 3350 pixels) - Scaled (29%) 0e1caf60bb554517839766327b3fe53e.jpg (JPEG Image, 736 × 523 pixels) 49ec201999bd461777aa9c98d0fd9a1d.jpg (JPEG Image, 736 × 520 pixels) COPD-Infographic1-791x1024.png (PNG Image, 791 × 1024 pixels) - Scaled (97%) New wearable device uses breathing patterns to track state of mind. Personal health monitoring is a rapidly expanding business. Through the proliferation of "apps" on mobile devices, we are now able to monitor just about anything we want to, with updates provided for us on our smartphones and notifications broadcast for all to see through social media. Medical News Today has previously investigated examples of this kind of technology.

Last year, we examined three examples of self-tracking technology that monitor, among other things, how active you are during the day, your quality of sleep during the night and the amount of calories you consume. A group based in San Francisco, CA, has been working on a new piece of technology that they believe can offer a form of self-tracking unlike any other currently available on the market. They claim that the average person is only active for 16% of the day, meaning that most self-tracking devices that focus on activity will ignore the remaining 84%.

The system, which is FDA-approved for clinical and home care, increases tidal volume by providing positive pressure ventilation to patients, which significantly improves ventilation, reduces dyspnea, increases oxygenation, significantly enhance exercise endurance, and unloads respiratory muscle activity, the study reported. Compared to long term oxygen therapy (LTOT), the NIOV system demonstrated the following, according to the same study: “Our study indicates that the NIOV System dramatically prolongs exercise tolerance. The Future of Wearable Tech & Why You Need to Care. By Ayori S. The term “Wearables” has got to be my favorite buzz word that is “blowing up” all over the place.

Everyone is using the term and talking about “Wearable tech”, but like “Big Data” few people actually have a clue what wearable tech REALLY means for industries or our personal lives. While ABI Research predicts that this year, about 90 million wearable devices will be sold this year mostly in the health & fitness, wearable tech goes far beyond Fitbits and Google Glass. Smart Wearable Healthcare Devices To Focus on Managing Cardiovascular, Respiratory Diseases in Aging Populations - RT: For Decision Makers in Respiratory Care. Non invasive continuous physiological monitoring. Chronic obstructive pulmonary disease (COPD) has become one of the most common diseases in the world and is projected to become the third leading cause of death.

According to the WHO 80 million people suffer from moderate to severe COPD worldwide, with 34 million in the G7 countries. Since COPD is not diagnosed until it becomes clinically apparent, prevalence and mortality data greatly underestimate the socioeconomic burden of COPD. COPD patients with a severe state of the disease are suffering from considerable limitations in their everyday life due to the severe breathlessness in both activity and in rest.

According to the US Centers for Disease Control and Prevention (CDC), 117 million Americans, or nearly one-half of the US adult population, have at least one chronic condition, and one in four adults has two or more. The CDC estimates that caring for patients with chronic conditions accounts for 70% of the annual health care spend in the U.S. Philips gives COPD patients a lifeline with new gadget.