Expanding uses of the connected watch - The M-WORLD. While the product in itself is not new (Seiko having launched the first connected watch in 1990), they have moved into the spotlight in the last two years, rapidly coming to epitomize the new array of connected objects. 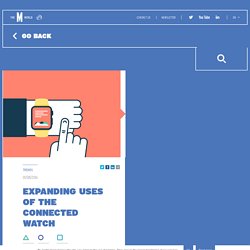 Global electronics giants Apple, Huawei, Samsung, Asus and LG have now all launched and begun marketing their models and each electronics show brings a new wave of innovations. The market is new and, so far, its take-off has been a little slower than analysts predicted. Although Apple does not release its sales figures, the success of the Apple Watch appears relative. According to Slice Intelligence, its sales rose from 200,000 units a day since its release in April 2015 to around 5000 a day from July… Considering that Apple claims 75% of the market, its growth remains moderate at present.

Analysts remain confident, however, even predicting that connected watches will be among the best-sellers of Christmas 2015. One thing remains certain however. Hooke: Wireless 3D Audio Headphones by Hooke. Simple, affordable wireless headphones that let you listen to your favorite music, record, edit and trim 3D audio, pair it with your smartphone’s video camera, upload it your social network, and stream it live to friends. 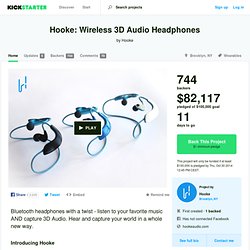 It is sound captured identically to the way our ears hear it, so that when a recording is played back, it feels and sounds like you’re there. Conventional recording techniques leave sound flat and degraded. We should be able to record sound with its full depth and dynamic. Most audio, via mobile devices and digital cameras, is captured in what Hooke refers to as 2D. It is often unintelligible and does not capture the feeling of “being there”. Binaural - a method of recording sound that uses two microphones, arranged with the intent to create a 3-D stereo sound sensation for the listener of actually being in the room with the performers or instruments. Hooke combines the discovery of binaural recording and exceptional playback within one stylish unit. Hooke + Smartphone. Meta 1 Augmented Reality Glasses Are Dragging Us Into A VR Future. Meta — which recently presented at TechCrunch Disrupt SF 2014 — today began to ship the final version of its Meta 1 Developer Kit (which includes the AR glasses). 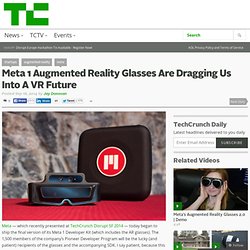 The 1,500 members of the company’s Pioneer Developer Program will be the lucky (and patient) recipients of the glasses and the accompanying SDK. I say patient, because this shipment is the culmination of Meta’s original Kickstarter campaign that was funded on June 16, 2013. Its new website also launches today. Meta is a company worth watching. In short, if you think the future of augmented reality will consist of looking at 3D advertisements with your tablet or relying on Google Glass for a real-time, augmented replay of a task you’re doing (superimposed in the corner of your eye), then you’re wrong. Nymi. Buy Preorder Myo Gesture Armband Controller by Thalmic Labs. No items in cart Myo - Dev. 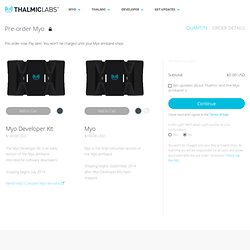 Kit Myo - Black Myo - White Oops, you can only order 10 Myos at a time right now! Case Study: Google Glass Customer Identifier. Google Glass, representing a huge opportunity for wearable computing is a best solution to meet with the above requirement [Client was ready to buy enough glasses as soon as Google launch the product]. 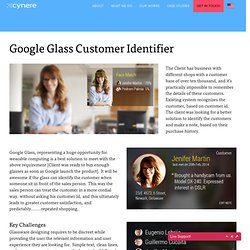 It will be awesome if the glass can identify the customer when someone sit in front of the sales person. This way the sales person can treat the customer in a more cordial way, without asking his customer Id, and this ultimately leads to greater customer satisfaction, and predictably.......repeated shopping. Ankles away! FlyFit fitness tracker worn on leg, not wrist.

It's hard to stand out from the crowd of fitness trackers, but the FlyFit hopes to do so via crowdfunding -- and by attaching itself to a different body part than normal. 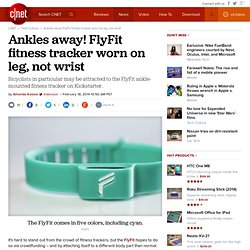 The gadget fits around your ankle, not your wrist. The FlyFit shares plenty of similarities with other trackers. It works with an iOS or Android app to collect and track data about your everyday activities, exercise efforts, and sleep quality. The biggest difference is its ability to measure leg movements. It can differentiate between walking, going up stairs, or biking. The waterproof design also makes it capable of going into the water.

The FlyFit is going for a $99 pledge. Wrist-mounted fitness trackers don't meet everyone's needs. Icis: It's like Google Glass, but classy. Picture Larry Page: all nerd, all business. 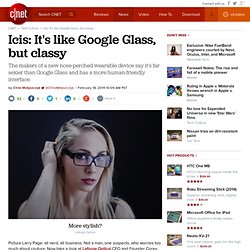 Not a man, one suspects, who worries too much about couture. Now take a look at Laforge Optical CEO and Founder Corey Mack in the video below. There's a little snazz there. So, it's not surprising that his startup is taking on Google's famed Glass at one of its more vulnerable pressure points: the embarrassment factor.