Wearables Rescue Epilepsy! Research has shown that industrial nations have approximately 50 out of every 100,000 people develop epilepsy each year. 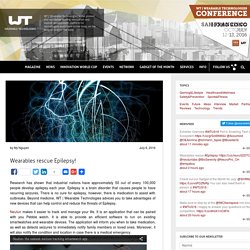 Epilepsy is a brain disorder that causes people to have recurring seizures. There is no cure for epilepsy, however, there is medication to assist with outbreaks. Beyond medicine, WT | Wearable Technologies advices you to take advantages of new devices that can help control and reduce the threats of Epilepsy.

Neutun makes it easier to track and manage your life. It is an application that can be paired with you Pebble watch. WINAM, a product of Neuropro, aims to deliver an early warning system for epilepsy patients. Bioserenity presents the Neuronaute: a smart healthcare solution for the diagnosis and monitoring of epilepsy. Cerbomed shares their product, NEMOS, to the world. Embrace can also be a solution for you. An effective seizure tracker can also improve safety because seizures can cause injuries as patients often fall and hurt themselves. 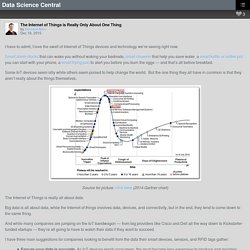 Smart alarm clocks that can wake you without waking your bedmate, smart showers that help you save water, a smart kettle or coffee pot you can start with your phone, a smart frying pan to alert you before you burn the eggs — and that’s all before breakfast. Some IoT devices seem silly while others seem poised to help change the world. But the one thing they all have in common is that they aren’t really about the things themselves. Source for picture: click here (2014 Gartner chart) The Internet of Things is really all about data. Big data is all about data, while the Internet of things involves data, devices, and connectivity, but in the end, they tend to come down to the same thing. I have three main suggestions for companies looking to benefit from the data their smart devices, sensors, and RFID tags gather: Ensure your data is accurate. DSC Resources Additional Reading. Silicon Valley Will See You Now. Sam De Brouwer hands me a sleek device about the size and shape of a makeup compact.

Called the Scanadu Scout, it is designed to measure blood pressure, body temperature, heart and respiratory rates, and blood oxygen and emotional stress levels with no muss or fuss. She demonstrates how to hold it gently against the left side of my forehead. A moment later, my blood pressure reading, pleasantly healthy, pops up on De Brouwer’s iPhone. It seems a little bit like magic. De Brouwer claims that the Scout is modeled on Star Trek’s beloved medical tricorder—the smartphone-size device that Dr.

Because this is Silicon Valley, where each new twist of the business cycle comes laden with not only glowing accounts of new products and services but also world-changing rhetoric and ideological calls to arms, promoters of digital health like De Brouwer are promising more than just lower medical bills. How Wearables Will Change Our Lives at Home, in the Office and on the Floor. Stephen Lam, Getty Images The information research analyst Gartner forecasts that the number of networked “things” grew 30% over the last year and will reach 4.9 billion this year. 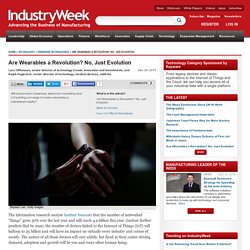 Gartner further predicts that by 2020, the number of devices linked to the Internet of Things (IoT) will balloon to 25 billion and will have an impact on virtually every industry and corner of society. The nature of all those devices will vary widely, but fixed at their center driving demand, adoption and growth will be you and every other human being. Wearable technology can be thought of as the human portal to the IoT, or what some have termed the “human cloud.” It will provide a platform for us to generate, share and access personal and relevant data between the cloud from any location at any time. Beyond Fitness. 2015: The Year Wearables Became More Than a Bad Word. “Wearable” is a stupid term, when you think about it. 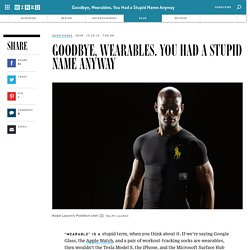 If we’re saying Google Glass, the Apple Watch, and a pair of workout-tracking socks are wearables, then wouldn’t the Tesla Model S, the iPhone, and the Microsoft Surface Hub all count as PCs because they have screens and browsers? If wearables are things you can wear, are VR headsets wearables? If you put your phone in a holster on your belt, is it a wearable? Wearables Could Soon Know You’re Sick Before You Do. Mike Snyder was clearing brush behind his brother’s western Massachusetts house, erecting a fence to keep deer from the blueberries, when the tick bit him. 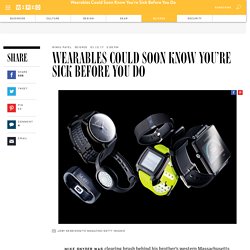 A few days later, on a flight to Norway with his family, his palms itched and his head grew woozy. So the Stanford geneticist dumped a bunch of wearable sensors on his tray table and began doing what he does best: measuring himself. Low blood oxygen, said the Masimo pulse oximeter housing his finger, and the globe-shaped Scanadu he held against his forehead every few minutes. Weird heart-rate, said the two Basis smart watches strapped to his wrists. Immediately he feared the worst: Lyme disease. Snyder’s approach to his personal health may seem overzealous, but he’s doing it in the service of science.