Boutique Fitbit : Acheter Surge, Charge HR, Charge, Flex, One, Zip et Aria. Your Fitbit One is always tracking, even when the display is asleep. 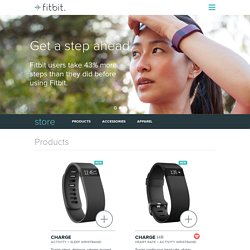 Press the button to view your stats. Your flower will grow and shrink, depending on how active you've been recently. Calories burned includes resting calories and calories from activity. The activity stats shown on your tracker reset at midnight. Steps Stairs Climbed Distance Calories Burned To track your sleep, press and hold the button on your tracker until you see the stopwatch. Press and hold the same button when you are awake to end your sleep recording. Use Silent Alarms to wake from sleep without disturbing your partner. Your One gently vibrates on your wrist to silently wake you. Your Fitbit One contains a rechargeable battery. When plugged into the Charging Cable, it takes about 2 hours for your tracker to be fully charged. Your activity information is sent to your computer when your tracker is within 20 feet of the plugged-in Wireless Sync Dongle Syncing happens automatically. Steps distance calories burned clock. 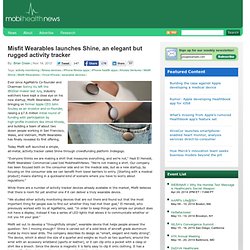 After bringing on former Apple CEO John Sculley as an investor and co-founder, raising a $7.6 million initial round of funding with participation by high-profile investors like Vinod Khosla, and building a team of about two dozen people working in San Francisco, Wales, and Vietnam, Misfit Wearables has finally revealed its first offering. Today Misfit soft launched a simple, all-metal, activity tracker called Shine through crowdfunding platform Indiegogo. “Everyone thinks we are making a shirt that measures everything, and we’re not,” Hadi El Heneidi, Misfit Wearables’ Commercial Lead told MobiHealthNews. ”We’re not making a shirt. Our company has been focused both on the consumer side and on the medical side, but as a new startup, by focusing on the consumer side we can benefit from lower barriers to entry.

Sproutling’s Wearable Baby Monitor. As a parent, wouldn’t you like to know if your baby’s body temperature changes significantly or if the humidity in the slumber room goes up? 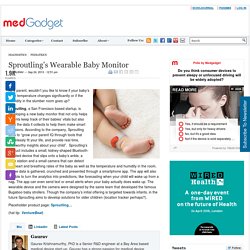 Sproutling, a San Francisco based startup, is developing a new baby monitor that not only helps parents keep track of their babies’ vitals but also uses the data it collects to help them make smart decisions. According to the company, Sproutling aims to “grow your parent IQ through tools that seamlessly fit your life, and provide real time, trustworthy insights about your child”. Sproutling’s product includes a small, kidney-shaped Bluetooth-enabled device that slips onto a baby’s ankle, a base station and a small camera that can detect the heart and breathing rates of the baby as well as the temperature and humidity in the room. All the data is gathered, crunched and presented through a smartphone app. The app will also be able to turn the analytics into predictions, like forecasting when your child will wake up from a nap. (hat tip: VentureBeat) Top Trends And Technologies Shaping Medicine in 2015! It was an extraordinary year for technological improvements in medicine & healthcare. 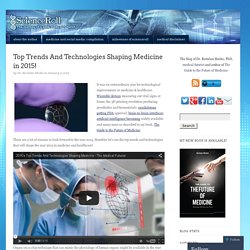 Wearable devices measuring our vital signs at home; the 3D printing revolution producing prosthetics and biomaterials; exoskeletons getting FDA approval; brain-to-brain interfaces; artificial intelligence becoming widely available and many more as described in my book, The Guide to the Future of Medicine. There are a lot of reasons to look forward to the year 2015, therefore let’s see the top trends and technologies that will shape the year 2015 in medicine and healthcare! Organ-on-a-chip technique that can mimic the physiology of human organs might be available in the year 2015 which mean that we might soon be able to create the first virtual model of the human body making it possible to run drug tests on billions of patient models in seconds with supercomputers.

Keep an eye on: Wyss Institute of Harvard In areas with doctor shortages, telemedicine will be used at its best. Here are some more lists. Apple, Google, Samsung vying to bring health apps to wearables. San Francisco: For decades, medical technology firms have searched for ways to let diabetics check blood sugar easily, with scant success. 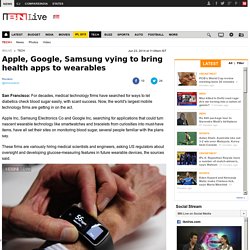 Diabetes afflicts 29 million Americans and costs the economy some $245 billion in 2012, a 41 per cent rise in five years. Poaching. Wearable Device on Pinterest.