Designing for the IoT and wearables

IoT’s Mortal Enemy: The Product Owner. The future of the Internet of Things is less certain than it seems. 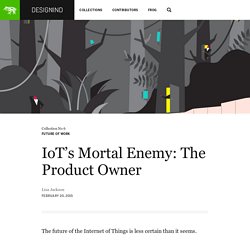 We understand that the Internet of Things (IoT) is going to be big. As employees and consumers, we will be able to make decisions based on more accurate data. As managers, we will have new tools that reduce waste and inefficiencies in the workplace. But if this highly anticipated future is to happen, we must explore how financial rationalization, strategic partnering, and platform complexity influence the mortal enemy of the IoT: the product owner.

Financial Rationalization Historically, products have been launched through stage-gate product development, in which ROI and margin calculations have been the guide rails for decisions. In his Harvard Business Review article “The Capitalist’s Dilemma,” Clay Christensen indicates that common financial ratios used as success metrics can deter investment in growth. Strategic Partnerships Platform Complexity IoT devices require software and cloud platforms. As tech giants prepare for connected living, marketers risk being left behind. Talking to CBC Spark About Emotion and Technology — Changeist. Becky Stern - What's Working in Wearables (2014 OHS) Emotion and the Internet of Things — Changeist. Last month I was invited to speak at Thingscon's inaugural Dutch event in Amsterdam while on a swing through the country (I'll be speaking at the main Thingscon in Berlin in April, stay tuned for details). 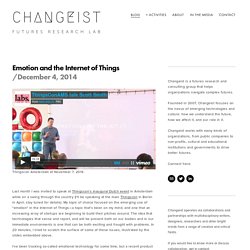 The Future of Wearable Technology in Pictures. Last month we announced a contest to give away two copies of Drawing Ideas along with some stencils from UI Stencils. 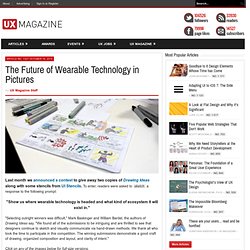 To enter, readers were asked to sketch a response to the following prompt: "Show us where wearable technology is headed and what kind of ecosystem it will exist in. " "Selecting outright winners was difficult," Mark Baskinger and William Bardel, the authors of Drawing Ideas say. "We found all of the submissions to be intriguing and are thrilled to see that designers continue to sketch and visually communicate via hand-drawn methods. 10 Top Wearable Technology Design Principles. People, Ubiquity, and the Internet of Things: The New Mobile Context. By Steven Hoober and Mudassir Azeemi Published: January 13, 2014 “We like to distinguish between the environmental and situational contexts of people regardless of the device. … Interactions in all … contexts are important….” 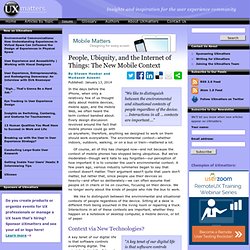 In the days before the iPhone, when only a relatively few of us thought daily about mobile devices, mobile apps, and the mobile Web, we often heard the term context bandied about. Every design discussion revolved around the fact that mobile phones could go with us anywhere; therefore, anything we designed to work on them should work everywhere. The environmental context—whether indoors, outdoors, walking, or on a bus or train—mattered a lot. 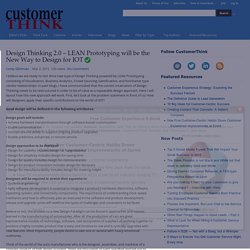 In past blogs, I have communicated that the current incarnation of Design Thinking needs to be restructured in order to be of value as a repeatable design approach. Here I will layout how this new approach will work. First, let’s look at the problem statement in front of us: How will designers apply their specific contributions to the world of IOT? Good design will be defined in the following attributes: Design goals will include: • Achieve hardware standardization through software-based customization • Enable personalization • Incorporate the ability to support ongoing product upgrades • Enable predictive, enhanced, or remote service.

SXSW 2015 DESIGNING YOUR FUTURE WITH THE CONNECTED CAR. Vehicles continue to grow smarter and more connected. 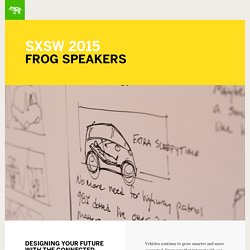 From cars that interact with our homes and cities to driverless cars that chauffeur us wherever we want to go, the next ten years will see a fundamental shift in the way we engage with our cars and the role they play in our lives. Magazines and concept videos are beginning to show what this connected future might look like. But as drivers, passengers, and pedestrians, what does the connected car mean for the way we live? Small Data Is Driving The Internet Of Things. Ten examples of IoT and big data working well together. Many of the conversations taking place around the Internet of Things (IoT) are incomplete without a mention of big data. 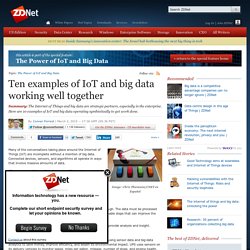 Connected devices, sensors, and algorithms all operate in ways that involve massive amounts of data. "The success or failure of the Internet of Things hinges on big data," says Brian Hopkins, an analyst with Forrester Research. As organizations step into IoT, they must understand the symbiotic relationship between it and big data. For IoT deployments to really make an impact, they must provide some sort of useful tool or service, while also collecting relevant data. Just like with any big-data play, merely collecting the data isn't enough. Here are ten examples of IoT and big data working well together to provide analysis and insight.

One of the largest shipping companies in the world, UPS, has been using sensor data and big-data analytics to save money, improve efficiency, and lessen its environmental impact. 2. 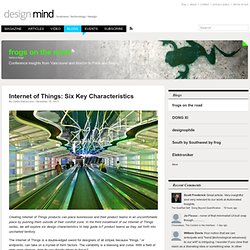 Four types of Internet of Things? I’m currently pulling together a few slides to introduce Berg as a platform to a few manufacturers. 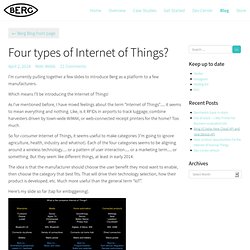 Which means I’ll be introducing the Internet of Things! As I’ve mentioned before, I have mixed feelings about the term “Internet of Things”… it seems to mean everything and nothing. Like, is it RFIDs in airports to track luggage, combine harvesters driven by town-wide WiMAX, or web-connected receipt printers for the home? Too much. So for consumer Internet of Things, it seems useful to make categories (I’m going to ignore agriculture, health, industry and whatnot). A closer look at the Internet of Things: A new industrial revolution. The Internet of Things is just the latest buzzword that is being used to push all manner of products. 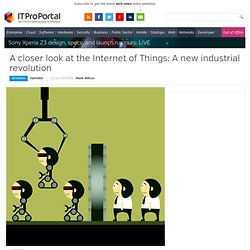 Let's cut to the chase - it's just about "stuff" (other than obvious things like computers and phones) connecting to the Internet. Nothing more than that. The Internet of Things: it's a really big deal. Good morning! Why Experience Design Rules the Internet of Things. If you are an Internet of Things startup, you may have been told that you need an “experience designer” to help really make your product sing. This is true, but experience design is a lot bigger than you think. The Path To A Programmable World. We now live in a world permeated by computers. From phones to watches, home thermostats to coffee makers, and even ball-point pens, more and more of the gadgets we interact with on a daily basis are general-purpose computational devices in disguise.

These “smart” devices differ from ordinary ones in that they are programmable and can therefore respond to users’ specific needs and demands. For example, I recently bought the Jawbone Up 24, a rubber bracelet fitness monitor that tracks my daily movement. While the Jawbone is an interesting gadget on its own, it also works with a cross-device interface I can program. So now, every time the Up detects that I’ve met my daily goal for number of steps walked, a festive-looking lava lamp in my living room lights up. What will this programmable world look like? Is This The Secret To A Cheaper Internet Of Things? To solve help their own team more easily write and share code, Temboo designed a new way to program called Twyla.

It was originally just an internal experiment, but it wasn't long before they figured out it was something special. “It started from a bigger idea of how to get systems talking together, and rethinking at a really high level how to program,” says Vaughn Shinall, Temboo engineer and head of Product Outreach. Over a period of time that grew into a new visual programming language and an unexpected discovery: that Twyla is also a way to program connected hardware. And right now, there is nothing else like it out there. A User-First Approach to Location Tracking. “Big data” is a major buzzword right now. Behind GE's Vision For The Industrial Internet Of Things. The GE Evolution series locomotive is a beast of a machine. Dropbox's Head of Design on the Dawn of Personalized Products. The Internet of YOU: When Wearable Tech and the Internet of Things Collide. The recent Apple Healthbook and Google’s Android Wear combined with Motorola’s Moto 360 news are taking the wearable space to the next level.

Apple Healthbook demonstrates the powerful insights about ourselves that wearables could deliver. Once the data is pulled into the platform, it can find correlations and trends and not only display its meaning in the historical sense, but make predictions that can give us even greater, more proactive insights about ourselves and how to improve our lives. Design Jam: Wearables in the Workplace « The EchoUser Experience. Posted by: EchoUser.

Philosophy. Future of IoT. Context is the new search. AI and the internet of things. The Internet of Open Things. Animals. Features. Safety. Product Covergence in the age if the IoT. Empathy and technology. Beyond-screen: gesture UX. Customized customer journeys. Internet of everything and privacy. Internet of Things Analytics - IoTA.