3 Nonbinary Femmes Describe What It’s Like Not Being Men or Women. Mighty Morphin Genderqueer: Discovering Gender Non-Conformity Through the Pink Power Ranger — WUSSY MAG. At a young age, I was an unapologetic fem. 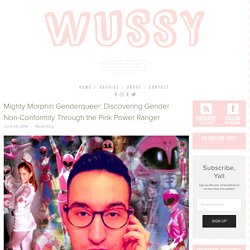 Not because I was unafraid, but because I truly didn’t know differently. I didn’t understand the difference between masculine or feminine. I wanted to play and have fun like any child, and for me that was dressing up as the Pink Power Ranger. L’enbyphobie spécifique aux personnes assignées garçons – La vie en queer. Les fibres noires: BD érotique sur le genre Non-Binaire / Queer. 'Steven Universe' Creator Talks How She Created the Queerest Cartoon on Television. GLAAD's Beyond the Binary Campaign: This is Whad Gender-Nonbinary People Look Like / them. Jacob Tobia, Author & Producer | they/them What does being nonbinary mean to you? It means letting myself explore the fullness of my creativity. It means transcending the boundaries that have been placed around my body. It means living my life with integrity, courage, and clarity. Comment rendre la langue moins sexiste ? - Espoir d'1 rat vert.

I’m Not Masculine or Feminine – I’m Just Me. Soon after I got my massage license, I met an acupuncturist who shared space with a doula. 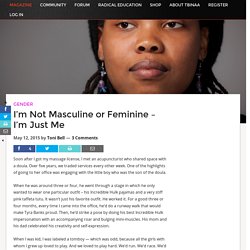 Over five years, we traded services every other week. One of the highlights of going to her office was engaging with the little boy who was the son of the doula. When he was around three or four, he went through a stage in which he only wanted to wear one particular outfit – his Incredible Hulk pajamas and a very stiff pink taffeta tutu. It wasn’t just his favorite outfit. He worked it. When I was kid, I was labeled a tomboy — which was odd, because all the girls with whom I grew up loved to play. While my girl friends and I played hard, we had to come in earlier than the boys. The association of tasks and access to space with binary gender roles is an arbitrary cultural construct that is forced down our throats.

10 Examples Of Nonbinary Genders Throughout History. Humans With the revitalized interest in transgender and nonbinary folks because of Caitlyn Jenner’s coming-out, people seem to forget that these issues have been around since the beginning of human history. 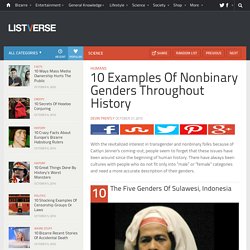 There have always been cultures with people who do not fit only into “male” or “female” categories and need a more accurate description of their genders. 10The Five Genders Of Sulawesi, Indonesia Sulawesi is a small island that is part of Indonesia, usually known for paradise beaches and leisurely vacations. 'I'm a non-binary 10-year-old' 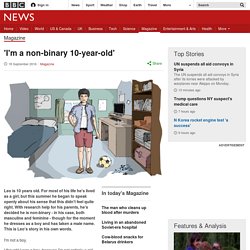 For most of his life he's lived as a girl, but this summer he began to speak openly about his sense that this didn't feel quite right. Nonbinary: A gender-fluid generation speaks out. In Indonesia, Non-Binary Gender is a Centuries-Old Idea. Bissu attending an Indonesian wedding. (Photo: Sharyn Davies/CC-BY-2.0) This week, an Oregon judge ruled to allow Jamie Shupe, a 52-year-old former Army mechanic, to list themselves as non-binary—that is, neither male nor female on their driver’s license.

The ruling is likely the first time that an individual has been allowed to legally identify as non-binary in the United States, and represents part of a growing effort around the world to extend legal recognition to those whose identities fall outside the masculine/feminine gender binary. Some might assume that the shift towards viewing gender as fluid or encompassing identities beyond the binary is a novel cultural change; in fact, several non-Western cultures—both historically and today—have non-binary understandings of gender. In Indonesia, one ethnic group shows us that the idea that gender identity is expressed in more ways than two is actually hundreds of years old. 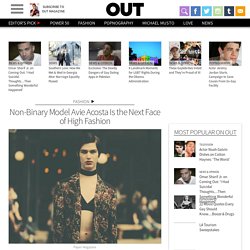 At 19, Acosta identifies as gender non-conforming: she began a male to female transition, taking daily estrogen hormones, before deciding to go on hiatus and enjoy the current space she's occupying. Acosta told PAPER, "I really just identify as a person. I mean yeah, at the end of the day I'm a girl, but any label is a restriction…since moving I've given myself space to exist, to breathe, and to just be me. " Previously to getting signed, Acosta had been living in Oklahoma, working full time. I Was Supposed to Be Pretty, Feminine, Nice, and Straight by Raye Stoeve. In the mirror, my chest looks flat. 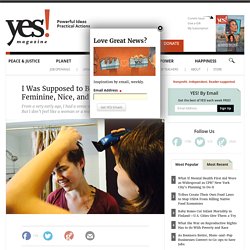 I hold up the camera, pull at my silver button-up shirt, square my shoulders. Click. What It's Like To Go To A Sex Party When You're Gender Non-Binary. By Logo 18h ago Here’s a confession I’m nervous to make as an enlightened queer in 2016: I’m uncomfortable at sex parties. 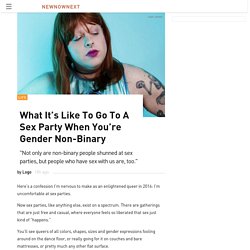 Now sex parties, like anything else, exist on a spectrum. There are gatherings that are just free and casual, where everyone feels so liberated that sex just kind of “happens.” You’ll see queers of all colors, shapes, sizes and gender expressions fooling around on the dance floor, or really going for it on couches and bare mattresses, or pretty much any other flat surface. At these kinds of gatherings, sex is incidental, a byproduct of the open, inclusive space being created. Zine — ctrl/alt/gender. Can fashion help abolish gender norms altogether? The accessibility of information online has undoubtedly provided a number of platforms for marginalised people to speak out and construct their own realities. 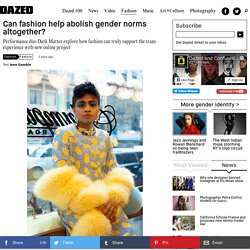 Away from a world in which their voices are often unable to be heard, the power of social media and all that exists as a result of its existence can be credited at least in part for initiating fashion’s recent push towards a more inclusive agenda. Making the jump from IRL to URL, Dark Matter are the art duo hailing from New York using poetry and performance to dismantle our society enforced gender binaries and restrictions.

Their latest project, ctrl/alt/gender (made in collaboration with Ace Hotel) uses the Squarespace platform to combine multiple formats such as poetry, imagery and ‘behind the scenes’ style tidbits, creating an online zine examining the perceived artifice in constructing a gender fluid fashion image, vs the lived experience of those who lie outside of the gender binary. I am neither Mr, Mrs or Ms but Mx. For the better part of two minutes, I stared down at the form in front of me. 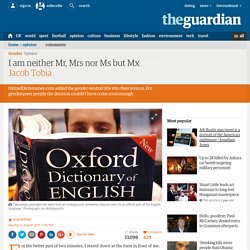 I was attending a formal dinner later that week and the RSVP required I choose whether I was “Mr, Mrs or Ms”. I looked at the question and froze, unsure of what to do. For many people, this choice would’ve caused no anxiety whatsoever. 6 folks ignored traditional prom dress codes, with stellar results. A lot of high school proms have dress codes. But what if they didn't? MTV asked 12 different folks to dress up for prom and ignore any of the "rules" out there for what they should wear. Here are six of them. How To Talk To Your Parents About Being Genderqueer. By MTV Voices Contributor 22h ago By Jacob Tobia The holiday season is often pretty tough for queer people. For many folks, it’s the one time of year when we have to go home and deal with our families asking hundreds of questions about our gender identity, sexual orientation and life choices.

Even in the best circumstances, this can mean some pretty awkward conversations; in the worst, it can be outright traumatizing. So with the holidays around the corner, here are some tips for talking to your parents about being genderqueer. 1. A Conversation with Genderqueer Activist and Latest MTV True Life Subject Jacob Tobia. My life without gender: 'Strangers are desperate to know what genitalia I have' This morning, I got out of bed, put on a yellow vinyl miniskirt with a tight black-and-white striped crop top and posted a picture of myself on Instagram.

I often post selfies online and today the comments range from “Slay, Tyler!” To “WTF! 5 Things You Should Know About Being Genderqueer. Being TOO MUCH for other people. I Have Long Nails Because I’m Proud Of What They Mean. Transgender Today - Jacob's Genderqueer Journey. Major fashion labels attack blogger for not conforming to gender roles.