I Refuse To Call My Daughter A Tomboy. Here's Why. Let’s Talk About Intersex. It is 2017.

Young women like Amandla Stenberg and Rowan Blanchard are using their public platforms to start complex conversations about gender equality. Activists like Janet Mock and Laverne Cox are helping to increase transgender visibility in the media and by extension, in society. Matt McGorry is publicly (and hilariously) exploring how to "do feminism" as a man. Jaden Smith is the face of Louis Vuitton's new womenswear campaign, challenging the idea of gendered clothing and rocking the heck out of some outrageously expensive skirts. In part because of outspoken public figures like these, the omnipresence of social media, and increased access to information, we are having larger, more open dialogues about social justice and the intersections of identity. 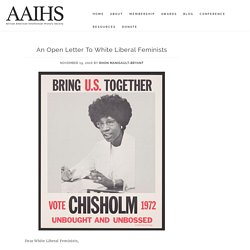 Trump’s election to the highest and most powerful political office of the United States last week, many of you have approached me, and my black brothers and sisters especially, with tearful eyes and somber faces. In person, in private, in public, and in the digital sphere, you have bemoaned the state of this world and our political landscape. Taking Mom Out For Brunch? It's A Feminist Tradition. The right to dine out alone in public during the day was an early victory in the women's rights movement. 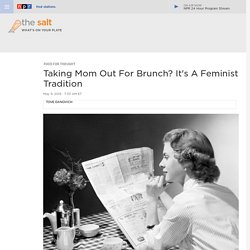 And as brunch took off in post-war America, for some, it became an exercise in women's lib. Chaloner Woods/Getty Images hide caption toggle caption Chaloner Woods/Getty Images. Cadence Case - This is a critical point and a really good... How ‘Service With a Smile’ Takes a Toll on Working Women. Discussions of gender inequality in the workplace often focus on the more visible manifestations of the imbalances between men and women: wage inequality, the motherhood penalty, or the lack of paid leave. 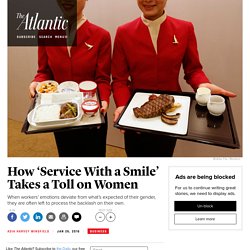 These are all important issues that, if fixed, would help women. More difficult to pinpoint and address, however, are the ways that what sociologists call “emotional labor” also reinforces workplace gender inequality. A key feature of the modern economy—and a way work has deviated from what it was in the past—is that the outputs of many jobs have become invisible. In her seminal book The Managed Heart, the sociologist Arlie Hochschild describes how the transition from a manufacturing-based economy to a service-based economy has brought on the commodification of emotions.

Transgender 101: Your Introductory Guide to Gender and Identity. You Are What You Wear<br><small>The Dangerous Lessons Kids Learn From Sexist ... What An Anti-Feminist Student Taught Me About Feminism: BUST True Story. “Looking into the origins of western feminism, in every case the women who were ‘stirring up the hornets’ nest’ were considered a bit odd. 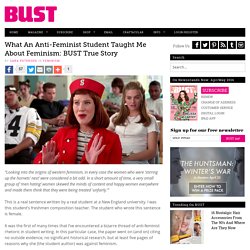 In a short amount of time, a very small group of ‘men hating’ women skewed the minds of content and happy women everywhere and made them think that they were being treated ‘unfairly.’” This is a real sentence written by a real student at a New England university. I was this student’s freshmen composition teacher. The student who wrote this sentence is female. Gender Gap Bake Sale Proves We Still Need Feminism. How do you prove that gender inequality and sexism still exist? 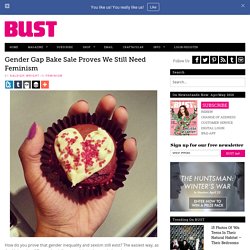 The easiest way, as the University of Queensland discovered, is to throw a bake sale. As part of the Australian university’s annual “Feminist Week," the University of Queensland’s Student Union hosted a Gender Pay Gap Bake Sale last Tuesday. Cupcakes and brownies were sold with prices set at $1 and discounted in proportion of the dollar females (and some males) earn relative to white men. The numbers were based on Australia’s Workplace Gender Equality Agency, which reports that women make, on average, only 83% compared with their male counterparts. Discounts were also given based on race, sexual orientation, and career field. Professor discusses his book on being raped. Many colleges and universities have come under criticism in recent years for their handling of sexual assault on campus. 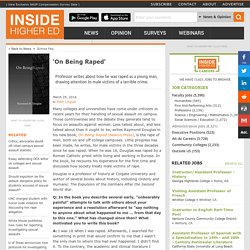 Those controversies and the debate they generate tend to focus on assaults against women. Less talked about, and less talked about than it ought to be, writes Raymond Douglas in his new book, On Being Raped (Beacon Press), is the rape of men, both on and off college campuses. Little progress has been made, he writes, for male victims in the three decades since he was raped. How To Mansplain In 6 Easy Steps.

Think you’re NOT a mansplainer? 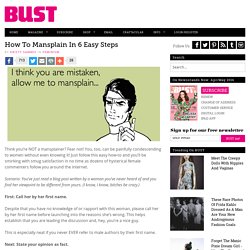 Fear not! You, too, can be painfully condescending to women without even knowing it! Just follow this easy how-to and you’ll be smirking with smug satisfaction in no time as dozens of hysterical female commenters follow you around the internet. I Heart the Singular They. No Sex, Please—I'm Asexual. A 30-something asexual woman reveals the truth about her oft-misunderstood orientation.

The Patronizing Questions We Ask Women Who Write. I’ve been fantasizing about writing fiction a lot lately. 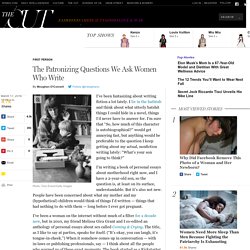 I lie in the bathtub and think about what utterly batshit things I could hide in a novel, things I’d never have to answer for. I’m sure that “So, how much of this character is autobiographical?” Would get annoying fast, but anything would be preferable to the question I keep getting about my actual, nonfiction writing lately: “What’s your son going to think?” I’m writing a book of personal essays about motherhood right now, and I have a 2-year-old son, so the question is, at least on its surface, understandable. 130+ Examples Of Cis Privilege in All Areas of Life For You To Reflect On and... “I just don’t see it,” my friend protested. To Men I Love, About Men Who Scare Me. I got a promotion a few days ago, so I decided to stop for a drink on my way home — just me and my sense of accomplishment. I ended up alone in bar, running defense against a bouncer who held my ID hostage while he commented on my ass (among other things), and asked me vaguely threatening questions about my sex life.

This is not a Yelp review. It’s not an angry rant, and it’s definitely not something women need to be reminded of. As far as I can tell there is only one good lesson to pull out of this otherwise shitty and all-too-familiar interaction, which is that in my experience, a lot of thoroughly decent men are still having trouble understanding it. 'Women are just better at this stuff': is emotional labor feminism's next fro... We remember children’s allergies, we design the shopping list, we know where the spare set of keys is. We multi-task. We know when we’re almost out of Q-tips, and plan on buying more. We are just better at remembering birthdays. We love catering to loved ones, and we make note of what they like to eat. We notice people’s health, and force friends and family to go see the doctor. Let's Be Clear – My Gender Identity is Harmless.

Panel 1. 5 Totally Normal Questions Transgender People May Be Afraid to Ask, Answered. Women considered better coders – but only if they hide their gender. 6 Easy Ways to Make Me, a Transgender Person, Extremely Uncomfortable. Nine times out of 10, when cisgender people ask me about my experiences as a queer, non-binary trans guy, they aren’t actually intending to make me uncomfortable. And yet, it happens. It happens a lot.

Wealthy Women Can Afford to Reject Marriage, but Poor Women Can't - Emma Green. In a Wall Street Journal editorial this week, Bush administration press secretary Ari Fleischer wrote that "'marriage inequality' should be at the center of any discussion of why some Americans prosper and others don't. " What Cis People Say To Trans People Vs. What We Hear. A New Campaign, #WomenNotObjects, Is Calling Out the Ads That Objectify Women. This is an ad for jeans. Canada's prime minister on the importance of raising feminist sons. Canadian Prime Minister Justin Trudeau believes in gender equality. How ‘Service With a Smile’ Takes a Toll on Working Women.

How to Bridge That Stubborn Pay Gap. Emma Watson Was Told Not To Say 'Feminism' In A Speech. She Did Anyway. Women Who Show Emotional Restraint Are Seen As Less Intelligent Fakers. Emotional reactions are a minefield of gender stereotypes. Men are expected to be strong — which often plays out as taciturn, logical, and controlled. Women, meanwhile, are expected to be empathetic — expressive, comforting, and, to an extent, uncontrolled and emotionally volatile. Previous research establishes the masculine approach as the gold standard for public behavior: Crying at work is met with disdain, induces strong feelings of shame, and can have damning consequences, which typically fall on female shoulders.

New research published in the journal Emotion, however, shows that for women, the line is even more difficult to walk. On Silence As A Tool For Queer Families. Swedish hospital is opening up a rape clinic for men. In a push to ensure gender equality for victims of sexual assaults, the Stockholm South General Hospital announced it will open the first “rape clinic” for men in Sweden. The hospital already has a similar walk-in center for women, but decided to open one specifically for men as male rape is still “extremely taboo” and often goes unreported. “The general perception is that men cannot be raped,” Lotti Helström, a senior physician at the hospital told local media. “In studies, the health effects are shown to be greater for men, both in terms of physical health and mental health.

There is a greater risk of a raped man getting post-traumatic stress disorder.” 5 accidentally transphobic phrases allies use — and what to say instead. 3 Ways White Cis Gay Men Can Do Better for the LGBTQIA+ Movement. These Adults Were Raised in Gender-Neutral Homes — Here’s What Happened. 5 Things I Wish You Knew About Intersex People. The Problem With Nude Photos Isn't Women, But the Men Who Obsess Over Them. Justin Hubbell's "It's Not A Race" Comic Busts 3 Common Myths About Gender Transitions. Why College Is More Dangerous for LGBT Students. Dad Sends His Little Girl Off to School in A Sundress. What She’s In At Pickup Leaves Him Seething. Undercover female cops sent to battle rising sex crimes on NYC transit. Not All Transgender People Have Dysphoria – And Here Are 6 Reasons Why That Matters.

My life without gender: 'Strangers are desperate to know what genitalia I have' Men See Powerful Women As Threats To Their Masculinity, Says Study. Guys React to Their Girlfriends Getting Catcalled On Hidden Camera. These 5 Myths Might Be Holding You Back From Non-Binary Transition. This Is What The Ideal Body Has Looked Like Over The Past 100 Years. High school girl to college recruiters: Don't make everything pink!

What Makes a Woman? Mark Ruffalo on the ‘I am not a feminist internet phenomenon’ Nigeria Female Genital Mutilation Outlawed. These 25 Examples of Male Privilege from a Trans Guy's Perspective Really Pro... One Reason Why False Rape Allegation Statistics Are So High.

101 Everyday Ways for Men to Be Allies to Women. People Can't Be Trusted To Make Unbiased Hiring Decisions. So This Woman Crea... ‘Put on your raping shoes and find this b*tch': Abby Martin is the latest tar... 'Shit People Say to Women Directors' Highlights Sexism in. Peer reviewer says female researchers should get a male co-author to “check” study.