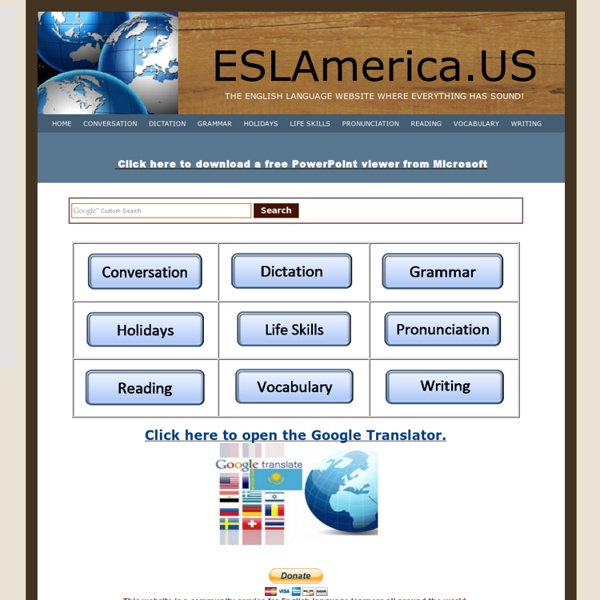 West African Folk-Tales by William H. Barker and Cecilia Sinclair How We Got the Name "Spider Tales" IN the olden days all the stories which men told were stories of Nyankupon, the chief of the gods. Spider, who was very conceited, wanted the stories to be told about him. Accordingly, one day he went to Nyankupon and asked that, in future, all tales told by men might be Anansi stories, instead of Nyankupon stories.

Ten Videos to Teach English Here are ten videos which can help students learn English writing skills. This is a process writing project. Students will need to draft and rewrite at least two versions before a satisfactory piece of writing can be completed. These videos are appropriate for high intermediate to advanced levels students. Writing interesting and reflective pieces that summarize the content and the students’ impressions will require some ability to conceptualize abstract concepts.

Project-based learning, the USA and Authentic Video in the EFL classroom The Globe Trekker/Pilot Guides video collection is a treasure trove for any English teacher. It encompasses extensive material from every corner of the world, and especially English-speaking countries are lavished with attention. Australia, Canada, Scotland, Wales, Ireland, England – you name it. Even individual cities are endowed with an approx. 50-minute complete video of its own, like London, New York City, San Francisco, Los Angeles, New Orleans to name but a few. Covering the United States satisfactorily in the language classroom is a daunting project, especially if you want to give your students more than a superficial understanding of its history, geography, language and people. Most textbooks for EFL students fall short in this respect, and it’s understandable – time available is limited and there is so much more that needs to be covered.

Connect With English Introduction Introduction: An overview of the course and an introduction to the main characters in the drama. Rebecca's Dream Rebecca's Dream: The story begins as we meet Rebecca Casey, a 28-year-old Boston working woman, who dreams of becoming a singer. We also meet her boyfriend Matt who doesn't think much of her dream, and her 17-year-old brother, Kevin, who doesn't think much about the future at all. The Adventures of Aladdin One day, as he was looking for wild figs in a grove some way from the town, Aladdin met a mysterious stranger. This smartly dressed dark-eyed man with a trim black beard and a splendid sapphire in his turban, asked Aladdin an unusual question: "Come here, boy," he ordered. "How would you like to earn a silver penny?" The Brothers Grimm Once upon a time . . . a widow had an only son whose name was Aladdin.

lesson plan: about jobs The aim of this class is to talk about different jobs and compare authentic job descriptions. The idea for this lesson came to me after stumbling upon this amazing website: I found the idea really interesting and decided to introduce my students to this community. The Task 29 Cool Places To See Before You Die. The Coolest Natural Places. All over our country, there are natural wonders just waiting to be discovered. You don’t have to travel to far and distant lands to be overwhelmed by natural beauty. There are some things in America that you simply need to see before you die. These 29 cool places are just the start of that list. When you finally see any of these in person, you’ll probably realize just how cool planet earth is. Words to the Wise: Aesop's Fables Interactive Book The Aesop for Children interactive book is designed to be enjoyed by readers of any age. The book contains over 140 classic fables, accompanied by beautiful illustrations and interactive animations. "Aesop's Fables"—also called "the Aesopica"—are a collection of stories designed to teach moral lessons credited to Aesop, a Greek slave and story-teller thought to have lived between 620 and 560 BCE. Aesop's fables are some of the most well known in the world and have been translated in multiple languages and become popular in dozens of cultures through the course of five centuries. They have been told and retold in a variety of media, from oral tradition to written storybooks to stage, film and animated cartoon versions—even in architecture. The fables remain a popular choice for moral education of children today.

My Favorite Vocabulary Activities That vocabulary is a basis for language learning is a given. When people travel abroad, they take dictionaries and phrase books, not grammar guides. Therefore, every course we teach should have a substantial focus on vocabulary. The more vocabulary one knows, the more families are known, and the more one can both derive and express meaning. USA Geography - Map Game - Geography Online Games "I stumbled upon your fun interactive geography games from a link on the Massachusetts Geographic Alliance Website. Since then, your games have become quite a hit with my competitive colleagues!" --Candice Gomes, Education Outreach Coordinator, Boston Public Library

Interactive Stories Interactive Stories or Guided Stories is the name of an English language teaching technique developed by Mark White, a language teacher/writer. What is an Interactive Story? The technique consists of a story, which includes both sentences and questions so that as one student reads it to the other, the listener can respond to the questions and interact with the storyteller and the story itself by making it up as they go along. What are they for? United Kingdom country profile - Overview 12 November 2014Last updated at 07:38 ET The United Kingdom is made up of England, Wales, Scotland and Northern Ireland. It has a long history as a major player in international affairs and fulfils an important role in the EU, UN and Nato. The twentieth century saw Britain having to redefine its place in the world. At the beginning of the century, it commanded a world-wide empire as the foremost global power.

Action & Adventure Stories "I have both held and beheld unlimited power and of it I know but one thing. It drives men mad." - Alexander the Great. Australian action thriller writer Matthew Reilly used this quote in his brilliant adventure saga "Seven Ancient Wonders". In short, he gave us the ultimate stimulant that triggers off almost all adventure stories.