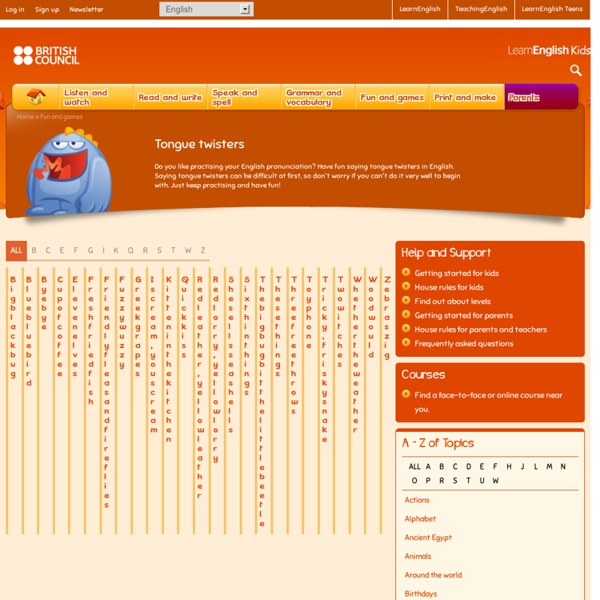 Ceri Jones - Pronunciation: focusing on sounds from day one For the last couple of years I’ve been teaching the Unknown Language component of the Trinity TESOL certificate course. This basically entails teaching four hours of a new language to the trainees in the initial stage of their course to give them a taste of what it feels like to be in a language classroom. I teach Welsh. I don’t use any published materials for the class. I have a few flashcards and simple worksheets and I have a fairly clear mini syllabus. The contents are not negotiated. Learn to Fika If you learn only one Swedish word, make it fika (fee-ka). Confusingly, it’s both a noun and a verb. Strictly speaking it means a coffee break. But you get a better idea of what it’s all about - and why it’s so important in Swedish culture - by thinking of it as a verb. Loosely translated, it means spending time over a coffee and a pastry - preferably a sweet bun - chatting and generally hanging out with a friend.

British Vs American English: 100+ Differences Illustrated Given the amount of places around the world that English is spoken, various differences are bound to emerge. Despite how much the USA and UK have in common, there are enough differences between their two versions of the English language that someone may not always understand exactly what someone from the other country is saying. Fortunately, the US State Department has created a series of useful graphics to help clear things up. Show Full Text

Learn Code Play, Design & Code Retro Arcade Games Grades 2+ | Blocks CS First Unplugged Grades 2-8 | Blocks, Unplugged, Scratch Discover Python with Silent Teacher You've Been Saying These Country And City Names Wrong Your Whole Life No one wants to be labeled as a gawking, uninformed foreigner. Aside from wearing a fanny pack, one of the fastest ways to get yourself labeled as a tourist is to mispronounce the name of the city you are visiting. However, in defense of all those who confuse the proper pronunciation of Ibiza for a seriously strong lisp, learning the proper names of all the places in the world can be a tricky task.

Short Stories Free Audio Sort by Titles Per Page 1 - 10 of 343 Titles How can film help you teach or learn English? What can film and video add to the learning experience? Kieran Donaghy, who won the British Council’s TeachingEnglish blog award tells us why film is such a good resource and recommends some useful websites, in one of our top five articles of all time, illustrated by artist Jamie Johnson. Language teachers have been using films in their classes for decades, and there are a number of reasons why film is an excellent teaching and learning tool. Learning from films is motivating and enjoyable Motivation is one of the most important factors in determining successful second-language acquisition.

Royals (Lorde) –[Multimedia-English videos] This was named the Best Song of 2013 by MTV News. MTV said: "She may never be 'royal,' but Lorde's chart-topping single will forever be enthroned in the collective cerebral cortex of the world." Ella Yelich-O'Connor is a New Zealand singer-songwriter. Inspired by her love for such royals as Marie Antoinette, Louis XVI of France, and the last Tsar, Nicholas II of Russia, she adopted the moniker of Lorde (The 'e' is pronounced silently). This song eschews an intro and starts right in with the verse "I've never seen a diamond in the flesh...". English Listening Online Views: Biking in Cambodia Julia talks about cycing from Cambodia to Vietnam with her friends (Part 1, Part 2, Part 3, Part 4). Mixers : Bad Hair Cut Six people talk about getting a bad haircut. Plus, be sure to check out all the re-edited mixers with new activities 1-25, 26-50, 51-75, 76-100.

Writing Topics Jump to navigation All online writing units are free ($0) during the pandemic. Thank you for teaching! Writing Topics