ProjectBritain.com - A resource of British Life and Culture in the UK by Woodlands Junior 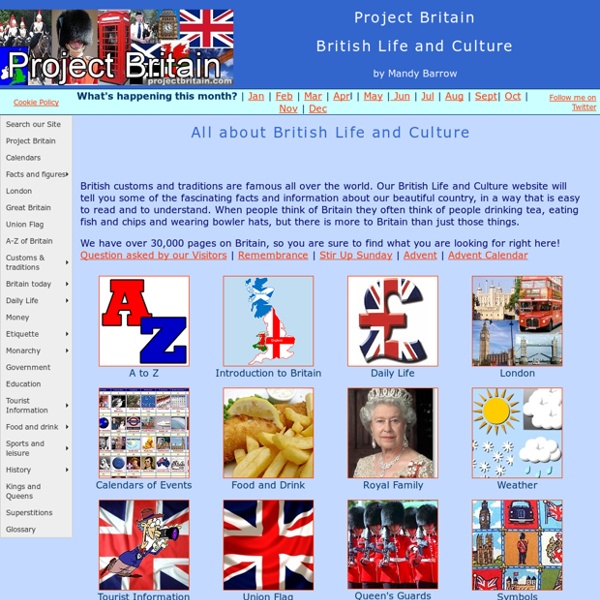 British customs and traditions are famous all over the world. Our British Life and Culture website will tell you some of the fascinating facts and information about our beautiful country, in a way that is easy to read and to understand. When people think of Britain they often think of people drinking tea, eating fish and chips and wearing bowler hats, but there is more to Britain than just those things. We have over 30,000 pages on Britain, so you are sure to find what you are looking for right here! Question asked by our Visitors |Easter | Shrove Tuesday (Pancake Day) |

A day in the life of The Queen - her daily routine Queen Elizabeth II, who recently became the longest-reigning British Monarch in history, is busy from morning until midnight it would seem… Take a look at The Queen’s daily routine and how she spends most of her time. The Queen’s day is always busy. Picture by: Splash News Rising at around 8.30 am, Her Majesty is greeted by the sounds of the bagpipes each morning at nine, as a piper plays on the terrace beneath her apartment at Buckingham Palace. She usually takes a bath before having breakfast in her apartment alone, and it is usually Cornflakes or Special K cereal and fresh or dried fruit. At Christmas, when she usually receives truffles as a gift, The Queen will have scrambled eggs with smoked salmon and a grating of truffle as a festive treat.

English - primaryedutech.com Skoolbo is a free downloadable program for both Macs and PCs. There are also apps available for IOS and Android devices. Skoolbo is essentially a literacy and numeracy program designed for 4 – 10 year olds to practice their core literacy and numeracy skills. British Culture, Traditions and Customs This page has moved to ProjectBritain.com our new British life and Culture website

More Free Graphic Organizers for Teaching Writing More Free Graphic Organizers for Teaching Writing Introduction The free graphic organizers that I offer on this page come from the collection of 50 More WRITERizers, the successor of 50 WRITERizers, which has generated loads of interest over the last couple of years—thanks to you and our colleagues. I truly believe that this newer collection breaks completely new ground. I just simply haven’t seen anything ANYWHERE that is anything like what you are about to see here. Royal chef reveals the Queen's favourite meals A typical lunch, served at 1pm, would be fish, such as a grilled Dover sole, on a bed of wilted spinach or with courgettes. Then there would be afternoon tea of cakes, scones and sandwiches. Mr McGrady reveals her favourite cakes were honey and cream sponge, ginger, fruit and the chocolate biscuit cake that Prince William also chose to be served at his wedding reception.

The Official Guide to New York City top attractions by nycgo.com staff Central Park. Photo: Julienne Schaer • Times Square. Free English Level Test - How good is your English? Which English exam is right for you? What is your level of English? Which exam should you study for? Check your level with these two level tests: