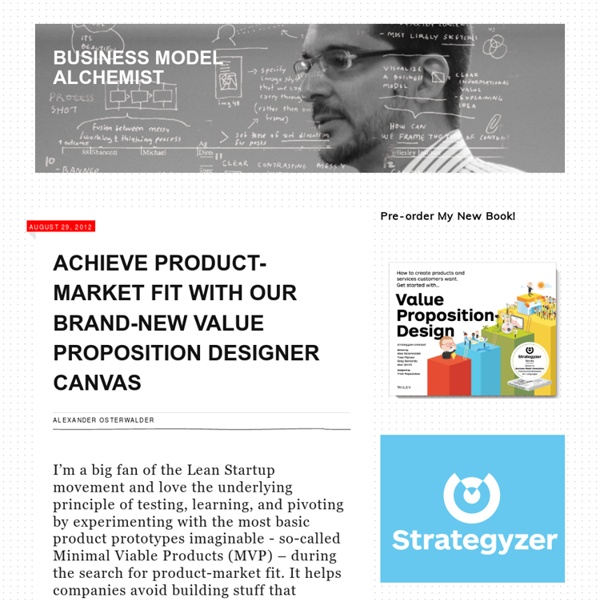 I’m a big fan of the Lean Startup movement and love the underlying principle of testing, learning, and pivoting by experimenting with the most basic product prototypes imaginable - so-called Minimal Viable Products (MVP) – during the search for product-market fit. It helps companies avoid building stuff that customers don’t want. Yet, there is no underlying conceptual tool that accompanies this process. There is no practical tool that helps business people map, think through, discuss, test, and pivot their company’s value proposition in relationship to their customers’ needs. The Value Proposition Designer Canvas is like a plug-in tool to the Business Model Canvas. The Canvas with its 9 building blocks focuses on the big picture. In this post I’ll explain the conceptual tool. The Value Proposition Designer Canvas Achieving Fit Customer Jobs First let us look at customers more closely by sketching out a customer profile. Ask yourself: What functional jobs is your customer trying get done? Related:  Job to be done - VP canvas

Technique 1 - Jobs to be Done | The Innovator's Toolkit Highlight the human need you're trying to fulfill. A job to be done (JTBD) is a revolutionary concept that guides you toward innovation and helps you move beyond the norm of only improving current solutions. A JTBD is not a product, service, or a specific solution; it's the higher purpose for which customers buy products, services, and solutions. For instance, most people would say they buy a lawnmower to "cut the grass," and this is true. But if a lawnmower company examines the higher purpose of cutting the grass, say, "keep the grass low and beautiful at all times," then it might forgo some efforts to make better lawnmowers in lieu of developing a genetically engineered grass seed that never needs to be cut. This is the power of the JTBD concept and technique: It helps the innovator understand that customers don't buy products and services; they hire various solutions at various times to get a wide array of jobs done. Background Jobs to be Done Breakdown Let’s develop an example. Steps

Introducing the Happy Startup Canvas — The Happy Startup School Too much of the startup world focuses on the mechanics of starting a business. Whilst it’s good to move fast and stay lean, it’s time we made our businesses more human and in the process gave them a better chance of survival. If you run a business you’ll often be asked: What’s your exit strategy? I’ve always found this to be a strange question, probably because I didn’t set out in business with the aim of selling it for a handsome dime. “When you take money from investors their business model becomes yours.”Steve Blank Startup founders should be creating companies so that they can live according to their own rules, not someone else’s – especially investors or shareholders. Whilst there will always be entrepreneurs that set out with the aim of a $10bn IPO, there is a growing movement of people that are starting out in business for reasons other than money. Will McInnes, founder of social business consultancy Nixon McInnes (and fellow Brightonian), has an interesting take on it: “Death” 1. 2.

How to apply the Jobs-to-be-done methodology to web design An common methodology in user-centered web design is the a combination of Personas and user stories. A Persona is basically a fictional user archetype. A model that is created from data. Data that should have been gathered by talking to real people. A Persona typically tries to represent the characteristics you need to know about the “typical” user of a web design. Personas works well in a situation where the user-base can easily be segmented into different types of users with different needs. Knowing the exact details about a user is somewhat useless if you don’t know what they actually want to do. Many web design solutions are better defined by the job they do rather than the customers they serve. In this article we will show an alternative to Personas and user stories. The Jobs-to-be-done methodology helps you focus on the job that the user wants done rather than who and how. Find out why the job is needed in the first place. Let’s analyse this format a bit more;

Breaking Free of The Hero Myth | Maya Zuckerman The world is changed, I feel it in the water, I feel it in the earth. I smell it in the air. Much that once was is lost; for none now live who remember it. Lady Galadriel: Lord of the Rings - Fellowship of the Rings - Film, Adapted from JRR Tolkien's epic trilogy. We've come a long way; we humans and the way we interact with narrative. Those ancient tales served as teaching tools for our elders to explain the wonders and horrors of the world around them, to teach children what it takes to become an adult, and to perpetuate their tribe's legacy. With very little change, we can easily recognize the same hero's journey model in our 21st-century mass media. As we move from adolescence to adulthood we all want to go to "the wilderness", escape our ordinary worlds and go on a quest through challenges and wonders, finding our boons and elixirs then returning as heroes and adults to the ordinary world. So why alter a working formula? Image courtesy of adbusters.org

What people really want – Nikkel Blaase – Medium Jobs, not users Creating remarkable products does not come from understanding typical customers. Products must serve core needs, not what people say they want. We should think less about archetypal customers and more about the jobs people want to get done. »Don’t find customers for your products, find products for your customers« — Seth Godin Creating Personas is a misleading concept. »Focus on the job, not the customer« — Des Traynor The core job of a product is to help customers achieve progress.

21 Technologies That Will Decentralize the World Across the planet, new technologies and business models are decentralizing power and placing it in the hands of communities and individuals. "We are seeing technology-driven networks replacing bureacratically-driven hierarchies," says VC and futurist Fred Wilson, speaking on what to expect in the next ten years. View the entire 25-minute video below (it's worth it!) Here are 21 innovations that will help make it happen: 1. Decentralized technology will become mainstream in 2014, according to the Open Garden Foundation, a San Francisco-based startup dedicated to net neutrality and internet access for everyone. 2. Commotion Router is free, open source software that allows for communities to build their own mesh networks. 3. Do you really want to trust your data to Twitter? 4. The future of devices is micro and wearable. 5. BitCloud is only a concept for now, but it's basically a proposal to replace the entire internet with a decentralized system. 6. 7. 8. 9. 10. 11. 12. 13. 14. 15. 16. 17.

People Don't Buy Products, They Buy Better Versions of Themselves There is the famous story about Steve Jobs when he invented the iPod and everyone in the news and the rest of the tech industry scratched their head a little. MP3 players had been around for quite a while, what was so different about the iPod? Of course, people argued many things were different, but one of the key aspects was how Jobs marketed and presented it: “1,000 songs in your pocket” When everyone else was saying “1GB storage on your MP3 player”, telling people about the product, Apple went ahead and made you a better person, that has 1000 songs in your pocket. Our friends over at User Onboarding wrote an incredible post and graphic, showcasing how this framework looks on a higher level: Note: Try sharing the above image by right-clicking it and the choosing “add to Buffer” with the Buffer browser extension, it’s one of our most shared updates, ever In particular, the image itself proved to be popular—understandably. Features vs. benefits – how to grasp the difference P.S.

Self-determination theory Self-determination theory (SDT) is a macro theory of human motivation and personality that concerns people's inherent growth tendencies and innate psychological needs. It is concerned with the motivation behind choices people make without external influence and interference. SDT focuses on the degree to which an individual's behavior is self-motivated and self-determined.[1][2][3] In the 1970s, research on SDT evolved from studies comparing the intrinsic and extrinsic motives, and from growing understanding of the dominant role intrinsic motivation played in an individual's behavior[4] but it was not until the mid-1980s that SDT was formally introduced and accepted as a sound empirical theory. Key studies that led to emergence of SDT included research on intrinsic motivation.[5] Intrinsic motivation refers to initiating an activity for its own sake because it is interesting and satisfying in itself, as opposed to doing an activity to obtain an external goal (extrinsic motivation).

The forces at work when choosing a product The jobs-to-be-done framework isn’t new, but I’ve only recently started digging into it much more since it’s been gaining a lot of traction everywhere I look. For a nice primer on the topic see Eric Portelance’s recent article for Teehan+Lax called The Iceberg of Jobs-to-be-Done, in which he explains how crucial this framework is for good product design: [Most successful products are created by] people who understand the importance of creating products that solve real customer problems, and have a set of tools and frameworks like jobs-to-be-done that they use to identify and validate the real human problems they’re trying to solve in the market. The progress-making forces diagram has been particularly useful for me in client work, since it helps people understand how difficult it can be to change existing user behavior. The basic premise of the diagram is this.