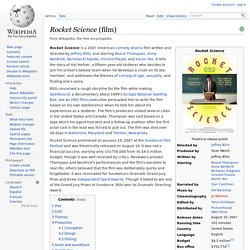 It tells the story of Hal Hefner, a fifteen-year-old stutterer who decides to join his school's debate team when he develops a crush on its star member, and addresses the themes of coming of age, sexuality, and finding one's voice. Rocket Science premiered on January 19, 2007 at the Sundance Film Festival and was theatrically released on August 10. It was not a financial success, earning only US$756,000 from its $4.5 million budget, though it was well-received by critics. Spellbound (2002 film) Spellbound is a 2002 documentary that was directed by Jeffrey Blitz. 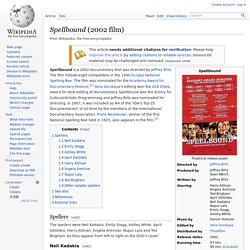 The film follows eight competitors in the 1999 Scripps National Spelling Bee. The film was nominated for the Academy Award for Documentary Feature;[1] Yana Gorskaya's editing won the ACE Eddie award for best editing of documentary. Spellbound won the Emmy for Cultural/Artistic Programming and Jeffrey Blitz was nominated for directing. In 2007, it was included as #4 of the "IDA's Top 25 Documentaries" of all-time by the members of the International Documentary Association. Frank Neuhauser, winner of the first National Spelling Bee held in 1925, also appears in the film.[2] The spellers were Neil Kadakia, Emily Stagg, Ashley White, April DeGideo, Harry Altman, Angela Arenivar, Nupur Lala and Ted Brigham.

Neil (as speller # 139) missed "hellebore" in the bee to get ninth place. His grandfather paid 1000 people in India to pray for him. Death Machine. Death Machine is a 1994 British science fiction film written and directed by Stephen Norrington.[1][2] §Plot[edit] Death Machine is set in the near future of 2003. 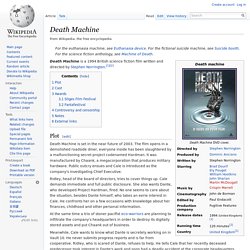 The film opens in a demolished roadside diner, everyone inside has been slaughtered by a malfunctioning secret project codenamed Hardman. It was manufactured by Chaank, a megacorporation that produces military hardware. Public outcry ensues and Cale is introduced as the company's investigating Chief Executive. Ridley, head of the board of directors, tries to cover things up.

At the same time a trio of stoner pacifist eco-warriors are planning to infiltrate the company's headquarters in order to destroy its digitally stored assets and put Chaank out of business. Meanwhile, Cale wants to know what Dante is secretely working on in Vault 10. Somehow, Dante finds out that Cale has his card and confronts Ridley about it. Carpenter calls Cale after finding Ridley's mutilated body which had an implanted life-sign transmitter. Pitch Perfect. The film premiered in Los Angeles on September 24, 2012.[5] Released on September 28, 2012, in the United States, the film met with positive reviews from critics. 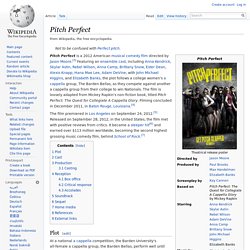 It became a sleeper hit[6] and earned over $113 million worldwide, becoming the second highest grossing music comedy film, behind School of Rock.[7] §Plot[edit] When Beca's father discovers she has not been attending classes, he comes to her with a proposition: if she joins a club and still does not want to remain at college after one year, he will allow her to leave school, and he will pay for Beca to move to Los Angeles to pursue her music career. After some persuasion from group leader Chloe Beale, she reluctantly joins the Barden Bellas. Aubrey does not initially approve of recruiting Beca, but yields nonetheless due to a desperate need for members and Beca's talent. 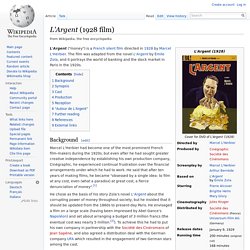 The film was adapted from the novel L'Argent by Émile Zola, and it portrays the world of banking and the stock market in Paris in the 1920s. Marcel L'Herbier had become one of the most prominent French film-makers during the 1920s, but even after he had sought greater creative independence by establishing his own production company, Cinégraphic, he experienced continual frustration over the financial arrangements under which he had to work.

He said that after ten years of making films, he became "obsessed by a single idea: to film at any cost, even (what a paradox) at great cost, a fierce denunciation of money".[1] Saccard and Gunderman are rival Paris bankers. Saccard sees an opportunity to rescue his failing bank, Banque Universelle, by financing the solo transatlantic flight of Jacques Hamelin, a pioneering aviator, and then capitalising on his popularity to set up a colonial business project in Guyane. L'Inhumaine. L'Inhumaine ("the inhuman woman") is a 1924 French drama-science fiction film directed by Marcel L'Herbier.[1] It was notable for its experimental techniques and for the collaboration of many leading practitioners in the decorative arts, architecture and music. 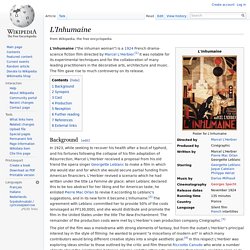 The film gave rise to much controversy on its release. Background[edit] In 1923, while seeking to recover his health after a bout of typhoid, and his fortunes following the collapse of his film adaptation of Résurrection, Marcel L'Herbier received a proposal from his old friend the opera singer Georgette Leblanc to make a film in which she would star and for which she would secure partial funding from American financiers. Porky's. Porky's is a 1981 Canadian-American sex comedy film about the escapades of teenagers at the fictional Angel Beach High School in Florida in 1954. 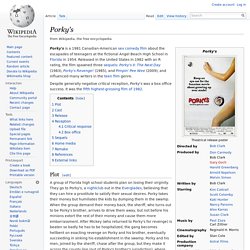 Released in the United States in 1982 with an R rating, the film spawned three sequels: Porky's II: The Next Day (1983), Porky's Revenge! (1985), and Pimpin' Pee Wee (2009), and influenced many writers in the teen film genre. Despite generally negative critical reception, Porky's was a box office success. It was the fifth highest-grossing film of 1982. Cemetery Man. Cemetery Man (Italian title: Dellamorte Dellamore) is a 1994 Italian-French-German comedy horror film directed by Michele Soavi and starring Rupert Everett, François Hadji-Lazaro and Anna Falchi. 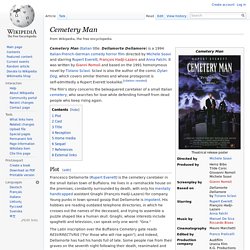 It was written by Gianni Romoli and based on the 1991 homonymous novel by Tiziano Sclavi. Sclavi is also the author of the comic Dylan Dog, which covers similar themes and whose protagonist is self-admittedly a Rupert Everett lookalike. Burn! §Plot[edit] Sir William Walker (Brando), is an agent provocateur sent to the island of Queimada, a fictional 19th-century Portuguese colony in the Lesser Antilles island group in the Caribbean.[1] Walker is sent to organize an uprising of black slaves to overthrow the Portuguese regime because Great Britain wants to get economic control of the island, as it is an important sugar cane producer. 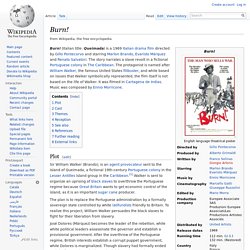 The plan is to replace the Portuguese administration by a formally sovereign state controlled by white latifundists friendly to Britain. To realize this project, William Walker persuades the black slaves to fight for their liberation from slavery. The Thin Man (film) The film's screenplay was written by Albert Hackett and Frances Goodrich, a married couple. 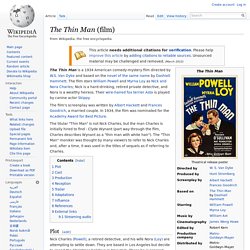 In 1934, the film was nominated for the Academy Award for Best Picture. The titular "Thin Man" is not Nick Charles, but the man Charles is initially hired to find - Clyde Wynant (part way through the film, Charles describes Wynant as a "thin man with white hair"). The "Thin Man" moniker was thought by many viewers to refer to Nick Charles and, after a time, it was used in the titles of sequels as if referring to Charles. The murderer is finally revealed in a classic dinner-party scene that features all of the suspects. A skeletonized body, found during the investigation, had been assumed to be that of a "fat man" because it is wearing oversize clothing. Koyaanisqatsi. Koyaanisqatsi (English pronunciation: /koʊjɑːnɪsˈkɑːtsiː/[1]), also known as Koyaanisqatsi: Life Out of Balance, is a 1982 film directed by Godfrey Reggio with music composed by Philip Glass and cinematography by Ron Fricke.

The film consists primarily of slow motion and time-lapse footage of cities and many natural landscapes across the United States. The visual tone poem contains neither dialogue nor a vocalized narration: its tone is set by the juxtaposition of images and music. Fritz the Cat (film) Fritz the Cat is a 1972 American adult animated comedy film written and directed by Ralph Bakshi as his feature film debut.[2] Based on the comic strip of the same name by Robert Crumb, the film was the first animated feature film to receive an X rating in the United States.

It focuses on Fritz (voiced by Skip Hinnant), an anthropomorphic feline in mid-1960s New York City who explores the ideals of hedonism and sociopolitical consciousness. Dead or Alive (film) Dead or Alive (DEAD OR ALIVE:犯罪者, Deddo oa araibu: Hanzaisha?) , abbreviated as DOA (Dii ō ei), is a 1999 Japanese yakuza action film directed by Takashi Miike. It stars Riki Takeuchi, as the Chinese Triad boss and former yakuza Ryūichi, and Show Aikawa, as the Japanese cop Detective Jojima, and focuses on their meeting and conflict. Hair High. Hair High is a 2004 animated comedy-horror-romance by American filmmaker Bill Plympton.[1] §Plot[edit] §Cast[edit] §Release dates[edit] It had its U.S. cinema premiere on 17 April 2004 and was released on DVD on 21 July 2010.[3] Inland Empire (film) Inland Empire was named the second-best film of 2007 (tied with two others) by Cahiers du cinéma,[4] and listed among Sight & Sound's "thirty best films of the 2000s", as well as The Guardian '​s "10 most underrated movies of the decade".[5] The main plot follows an actress named Nikki Grace (Dern), who has applied for a comeback role as Sue in a film entitled On High in Blue Tomorrows.

The day before the audition, Nikki is visited by an enigmatic old woman from Poland (Zabriskie) who says she is her neighbor; she predicts that Nikki will get the role, and recounts two Polish folk tales. One tells of a boy who, sparking a reflection after passing through a doorway, "caused evil to be born. " This Is Spinal Tap. Anvil! The Story of Anvil.