Mumblecore. Film subgenre The genre is a mostly American phenomenon.[6] The term mumblegore has been used for films mixing the mumblecore and horror genres.[7] Distinguishing characteristics[edit] Director Lynn Shelton in 2012 Mumblecore films are generally produced with a low budget, which has ranged from several thousand to several million dollars as well as low production values.[8][11] Filming is done in real places, as opposed to studio sets or soundstages. 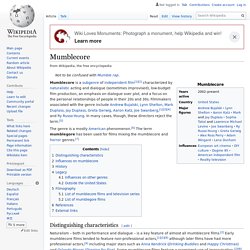 Many of these films are shot digitally,[1][11] although Bujalski's films have all been shot on film.[12] Soundtracks tend to be limited, or nonexistent. Audio file format. §Format types[edit] It is important to distinguish between the audio coding format, the container containing the raw audio data, and an audio codec. 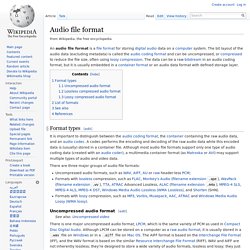 A codec performs the encoding and decoding of the raw audio data while this encoded data is (usually) stored in a container file. Although most audio file formats support only one type of audio coding data (created with an audio coder), a multimedia container format (as Matroska or AVI) may support multiple types of audio and video data. CinemaScope. CinemaScope is an anamorphic lens series used, from 1953 to 1967, for shooting wide screen movies. 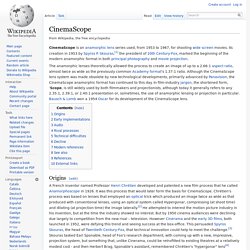 Its creation in 1953 by Spyros P. Skouras,[1] the president of 20th Century-Fox, marked the beginning of the modern anamorphic format in both principal photography and movie projection. §Origins[edit] A French inventor named Professor Henri Chrétien developed and patented a new film process that he called Anamorphoscope in 1926. It was this process that would later form the basis for CinemaScope. The optical company Bausch & Lomb were asked to produce a prototype "anamorphoser" (later shortened to "anamorphic") lens, meanwhile Sponable tracked down Professor Chrétien. Blocking (stage) In contemporary theatre, the director usually determines blocking during rehearsal, telling actors where they should move for the proper dramatic effect, ensure sight lines for the audience and work with the lighting design of the scene. 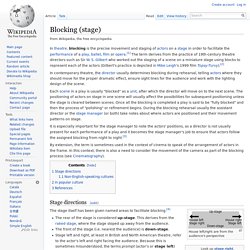 It is especially important for the stage manager to note the actors' positions, as a director is not usually present for each performance of a play and it becomes the stage manager's job to ensure that actors follow the assigned blocking from night to night.[3] By extension, the term is sometimes used in the context of cinema to speak of the arrangement of actors in the frame. In this context, there is also a need to consider the movement of the camera as part of the blocking process (see Cinematography). House left/right are from the audience's perspective The stage itself has been given named areas to facilitate blocking.[4] 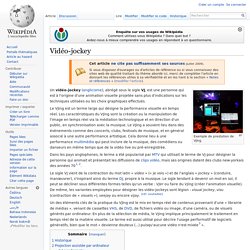 §Historique[modifier | modifier le code] Cinematic techniques. Basic definitions of terms[edit] Aerial shot: A shot taken from a plane, helicopter or a person on top of a building. 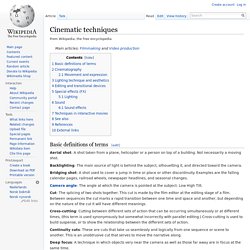 Not necessarily a moving shot. Backlighting: The main source of light is behind the subject, silhouetting it, and directed toward the camera. Bridging shot: A shot used to cover a jump in time or place or other discontinuity. Examples are the falling calendar pages, railroad wheels, newspaper headlines, and seasonal changes. Camera angle: The angle at which the camera is pointed at the subject: Low High Tilt.

Cut: The splicing of two shots together. Cross-cutting: Cutting between different sets of action that can be occurring simultaneously or at different times, (this term is used synonymously but somewhat incorrectly with parallel editing.) Continuity cuts: These are cuts that take us seamlessly and logically from one sequence or scene to another. Storyboard. A storyboard is a graphic organizer in the form of illustrations or images displayed in sequence for the purpose of pre-visualizing a motion picture, animation, motion graphic or interactive media sequence. 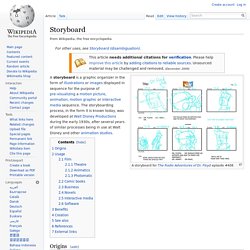 The storyboarding process, in the form it is known today, was developed at Walt Disney Productions during the early 1930s, after several years of similar processes being in use at Walt Disney and other animation studios. Origins[edit] Image. Two images of the same scene: The top image is a captured photo made using photography, while the bottom image is a simplified artistic rendering. 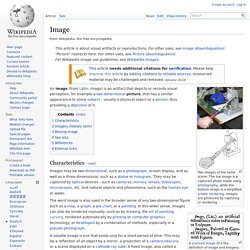 Images are produced by capturing or rendering. An SARradar image acquired by the SIR-C/X-SAR radar on board the Space Shuttle Endeavour shows the Teide volcano. Compositing. Four images of the same subject with original backgrounds removed and placed over a new background Compositing is the combining of visual elements from separate sources into single images, often to create the illusion that all those elements are parts of the same scene. 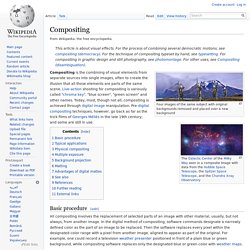 Live-action shooting for compositing is variously called "chroma key", "blue screen", "green screen" and other names. Today, most, though not all, compositing is achieved through digital image manipulation. Pre-digital compositing techniques, however, go back as far as the trick films of Georges Méliès in the late 19th century; and some are still in use. Motion graphic design. Motion Graphic Design is a subset of graphic design in that it uses graphic design principles in a filmmaking or video production context (or other temporally evolving visual medium) through the use of animation or filmic techniques. 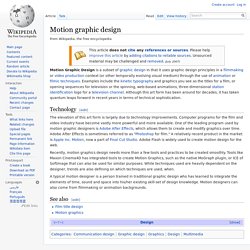 Examples include the kinetic typography and graphics you see as the titles for a film, or opening sequences for television or the spinning, web-based animations, three-dimensional station identification logo for a television channel. Although this art form has been around for decades, it has taken quantum leaps forward in recent years in terms of technical sophistication. Special effect.